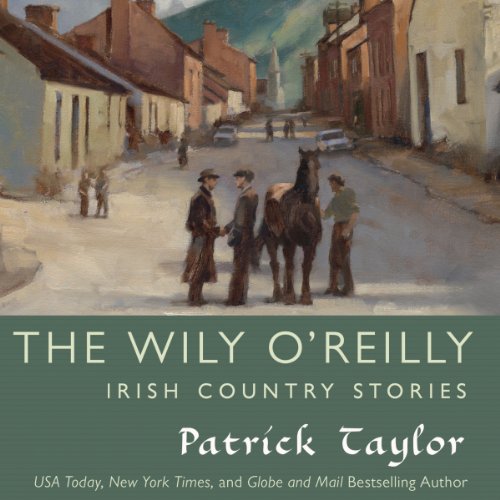 Written by: Patrick Taylor
Narrated by: John Keating
Try for $0.00

Long before Dr. Fingal Flahertie O’Reilly made most listeners’ acquaintance in Patrick Taylor's best-selling novel An Irish Country Doctor, he appeared in a series of humorous columns originally published in Stitches: The Journal of Medical Humour. These warm and wryly amusing vignettes provide an early glimpse at the redoubtable Dr. O’Reilly as he tends to the colourful and eccentric residents of Ballybucklebo, a cozy Ulster village nestled in the bygone years of the early '60s.

Those seminal columns have been collected in The Wily O’Reilly: Irish Country Stories. In this convenient volume, Patrick Taylor's legions of devoted fans can savor the enchanting origins of the Irish Country series…and newcomers to Ballybucklebo can meet O’Reilly for the very first time. An ex-Navy boxing champion, classical scholar, crypto-philanthropist, widower, and hard-working general practitioner, Fingal Flahertie O’Reilly is crafty and cantankerous in these charming slices of rural Irish life.

Whether he's educating a naive man of the cloth in the facts of life, dealing with chronic hypochondriacs and malingerers, clashing with pigheaded colleagues, or raising a pint in the neighborhood pub, the wily O’Reilly knows a doctor's work is never done, even if some of his "cures" can't be found in any medical text!

What listeners say about The Wily O'Reilly

I didn't love this book, I expected it to be stories about the real O'Reilly that I hadn't heard from the fictional novels previously. Plus, this is a fictional series, I just think this book doesn't really fit in.

Had to shut it off!

If you are a fan of the series, don't bother with this one. The story does not continue from the others, the time frame doesn't fit with the other books, key characters are strangley non-existent and, bluntly, it's very boring.

I was disappointed that the material wasn't new for the most part, and that some of the stories were attributed to others not some of the characters I had grown to love.

What disappointed you about The Wily O'Reilly?

Found this very odd. Does not make sense if you have heard the other books and confusing.

What was most disappointing about Patrick Taylor’s story?

Loved the whole series. Humour, easily followed, you want to know what is next. The characters are awesome and fit well together. O'Reilly makes the stories and Patrick Taylor is an awesome author and story teller.

Even though the characters are not fleshed out as well in this short subject collection, it still provides hours of wonderful narration and entertainment. I almost didn't purchase it but am glad that I did!

Not what I hoped for

This book is a repeat of the stories found in An Irish Country Doctor. I feel as if I bought the same book twice.