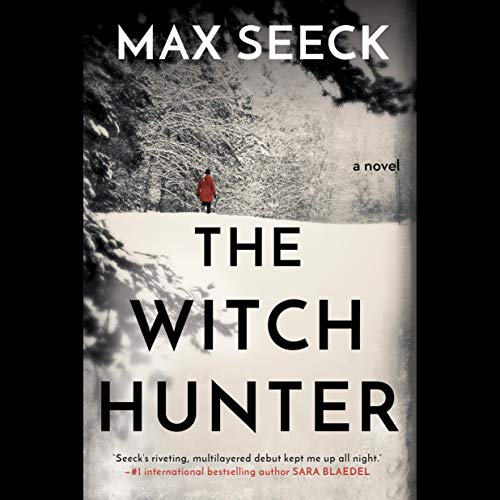 Written by: Max Seeck
Narrated by: Cady McClain
Try for $0.00

A shocking murder in an affluent Helsinki suburb has ties to witchcraft and the occult in this thrilling US debut from Finnish author Max Seeck.

A best-selling author’s wife has been found dead in a gorgeous black evening gown, sitting at the head of an empty dining table. Her most chilling feature - her face is frozen in a ghastly smile.

At first it seems as though a deranged psychopath is reenacting the gruesome murders from the Witch Hunt trilogy, best sellers written by the victim’s husband. But investigator Jessica Niemi soon realizes she’s not looking for a single killer but rather for dozens of believers in a sinister form of witchcraft who know her every move and are always one step ahead.

As the bodies start piling up, Jessica knows they won’t stop until they get what they want. And when her dark past comes to light, Jessica finds herself battling her own demons while desperately trying to catch a coven of killers before they claim their next victim.

"The Witch Hunter, Finnish novelist Max Seeck's pulse-quickening English-language debut, is a genre twofer: it gives crime-novel enthusiasts a satisfying puzzle to logic out, and it offers fans of supernatural tales a look at the world of, as one character puts it, ‘amulets, rabbit feet, you name it... a police procedural with paranormal activity at its black heart.” (Shelf Awareness)

“[A] rich, intensely suspenseful thriller. Seeck’s debut is dark and intricate - the moments of revelation are as vividly cinematic and impactful every time. Seeck has an uncanny ability to unspool reveals at just the right pace to get the reader’s heart pounding as they make the connection at the same moment as the detective on page. His expertise with pacing, his careful plotting, and his choice to use short, quick chapters all combine to create a vivid, robust thriller.” (Booklist, starred review)

“One twist follows another, baffling the police and readers alike. Seeck imbues this riveting procedural with a deliciously creepy undertone. Readers will be excited to see what Seeck does next.” (Publisher’s Weekly, starred review)

What listeners say about The Witch Hunter

So formula I started thing it was a farce. It was like a poor remake of an 80s slasher film.

Middle of the Road

Overall a good story, but at times hard to follow with the pronunciation of the character's name, which is understandable as it was originally written in Finnish. It started off very exciting, like a classic crime/thriller but there was a second storyline that was a bit confusing. The connection between the storylines was made at the very end and was a bit underwhelming and rushed. I expected a little more fantasy from the description but, in my opinion, this is a solid mystery, who-done-it story. The ending was less than I expected, but overall, I still enjoyed the bones of the story. This was a middle of the road experience for me.

The performance was outstanding! The storyline was incredibly complex, kept you on your toes wondering what was going to happen next and how all the players would evolve. The ending was like the rest of the book, totally unexpected. This is the best read I've had in a year.

The story started as a typical crime story, then took steps towards fantasy and maybe even towards horror and finally back again to crime. Main characters were built gradually and they were convincing. However, based on the first half of the book the story promised more than it eventually delivered.

As a Finn, it was exciting to listen how the originally Finnish text was translated to English. The narrator did wonderful job and her voice was pleasure to follow.

I listened to the end, just to see how freaking ridiculous it could be. Worse than I imagined. The protagonist was whiny and broken, but still somehow underdrawn. The villains are Caricatures. The plot is so convoluted that you are willing to actually go with it by the end because who the hell cares anymore about anything. The narration couldn’t have saved the book, but it could possibly have made it more tolerable?

This was absolutely terrible. The narration was awful--certain pronunciations and exaggerations of words made this a really hard listen. Story line all over the place and hard to follow.

I don't know if the original book was in Finnish, as perhaps the translation into English was not equivalent. But this is a horrible book, a waste of money. The story, the language in which it is told makes it a rough book to finish, which I did not. The narrator was the only good aspect of the book.

Great build up, not so great finish

The story started off great. The opening scene reminded me of the beginning of the movie "Scream". A woman alone in a house with a killer outside. There is a "B story" throughout that I really couldn't figure out its meaning. The payoff isn't revealed until the end and even then I felt a bit underwhelmed. For me the ending sort of fizzled out. The mastermind behind it all had a huge monologue explaining everything but it just didn't drive it home for me. Maybe I was hoping for a bigger shoot-'em-up kind of ending. I will still recommend it to others and maybe they can understand the ending better than I could.

I normally do not have issues with narration - but I found this reader detracted from the story with a lack of differentiation between the different characters' voices (I'd rather it was read straight through if they cannot do characters well), hackneyed voice characterizations (old ladies have wispy, threadbare voices for instance) and occasionally awkward phrasing.

I give The Witch Hunter some credit, because I did feel compelled to get to the end. However, the main character, Jessica Neimi, was difficult to fall in step with - a "perils of Pauline" type character - every blessing and curse befalls her - she is not just well off, she's ridiculously wealthy like Bruce Wayne, secretly doing good. Who cares that she does not extend the trust she requires from her colleagues to fight crime as a team to them in turn? She is also gorgeous - not just beautiful - to the point of being men's desire and a standard of beauty among women during the story. The conspiracy at the center of the book surrounds her...and is so ludicrous that I almost punted something across the room at the end.

The basic premise of the story is the type of guilty pleasure I enjoy - police investigating murders around witches, a cult - the story built around a book within the story, at first anyway. But it lost me with the insistence of the main character being tied to every action. Seems like it would be hard to sustain in a series - and this is slated to be one.

I bought this before I realized just HOW involved witchcraft and the Catholic Church would end up being in this horror novel. :-(
My bad.
I was too excited to find an English translation of what I hoped would be
another Scaninavian noir mystery.
I dont care for horror novels so I will not review this but slip away with an average review of 3.