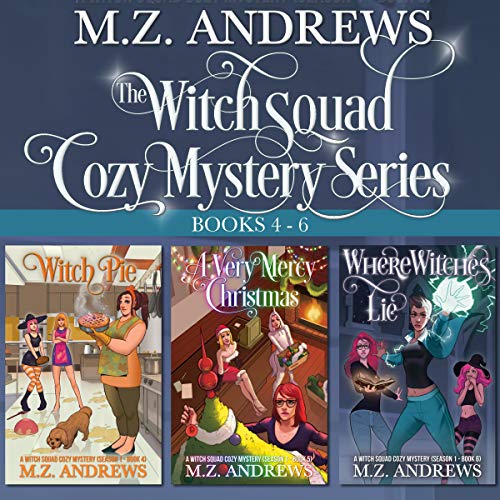 Written by: M.Z. Andrews
Narrated by: Lisa Cordileone
Try for $0.00

If you like quirky characters, lots of twists and turns in your mysteries, and a whole lot of fun, then the Witch Squad is for you!

Included in this collection:

It’s Thanksgiving break at the Paranormal Institute for Witches.

With a week off of school, the girls of the Witch Squad think they’re finally going to be able to enjoy a little needed downtime.

But as they start making plans for their big holiday dinner party, they discover that Alba has yet to contact Tony, her husband from back home. After finally convincing her to call him, what she discovers sends the girls into a state of shock.

Will their Thanksgiving be as magical as they’d all hoped it to be? Or, will the tragedy that has befallen one of their loved ones ruin Thanksgiving forever?

This novella is book four in the Witch Squad Cozy Mystery series. It does move the plotline between the characters along and the mystery is a complete story, but it is shorter than previous novels.

Excited to go home for the holidays and be reunited with their families, Mercy, Jax, Holly, Sweets, and Alba say their good-byes. However, when an unpredicted snowstorm ravages Aspen Falls, the girls must scramble to figure out their next move. Tempers flare as blame is placed, and feelings are hurt. By the looks of it, Christmas will surely be ruined.

But when a surprise visitor arrives, the girls are forced to find out what friendship really means and decide whether or not it’s worth saving. Visited by some blasts from the past, the girls are given glimpses into each other’s pasts and find out what life would have been like if they’d never met and formed the Witch Squad on the first day of classes.

A Very Mercy Christmas is the fifth book in the Witch Squad Cozy Mystery series. There is no mystery to solve; instead, sit back and enjoy a Christmas story about what went down over the Witch Squad’s first winter break and get a glimpse into the lives of each of the girls before they met.

Holiday break is over, and the girls are finally back at the Paranormal Institute for Witches. The campus is now blanketed with a thick layer of snow, thanks to the Christmas Eve storm that covered the tiny town of Aspen Falls, Pennsylvania.

Unfortunately, the first day back isn’t starting off so well. First, a new girl picks a fight with Alba in the cafeteria. Then, she sets her sights on Houston Brooks. But when one of the girls’ beloved school employees is found dead, things really take a turn for the worse.

When the dearly departed’s ghost fingers the murderer, it seems like it’s an open-and-shut case. But is it, really? Mercy’s not so sure. Convincing Alba and the rest of the girls to help her figure out the truth may not only land them in hot water with Sorceress Stone once again, but it may also put their lives in danger.

Rejoin your old friends, Mercy, Jax, Sweets, Holly, and Alba for a wild ride that ends with a wedding and a surprise guest!

This is book six in the Witch Squad Cozy Mystery Series, a clean cozy mystery series.

Individual books are also as audiobooks! Each audiobook in the series is a stand-alone mystery and can be listened to without listening to the entire series, but the relationships between the characters are a continuation from book to book. Enjoy clean fun for all ages. No sex, gore, or foul language.

still enjoying the storyline but the voices are a squeeky shrill whiney mess its a real struggle!

While the storylines are good and characters well written. The voices she does for Sweets and The other girl are horrible. It ruins the whole experience for me.

Love these books but…

I absolutely love these books but the narrator’s voice for Sweets is just awful. I mean she’s not Eeyore in Winnie the Pooh. Then OMG Jak’s just squeals all the time!!! Sometimes she even mixes up the voices and since when does a New Jersey accent sound like the Bronx. OMG!!! If I didn’t like the story so much and generally like the narrator except for these facts! I would not still be listening.

I did enjoy this whole series, can't wait for more. Hope there will be some spin offs.

UGH, Really not worth it

These books need a better editor. There were so many contradictory sentences/situations, for example borrowing Hugh's car and Mercy driving, to a few sentences later Sweet's is driving everyone in her car. Not really acceptable in a book that must be purchased. That was just one example of tons.
I picked them out of desperation for something quick to listen to when on a road trip and suffered through just to find out the ending (skipping many useless chapters in between.)
The Narrator is awful! Come on, anyone who reads aloud knows that you don't read and "act" out all the sounds (sighing, laughing, etc.) one or the other. The voice she used for Sweets was like nails on a chalkboard, what self respecting adult talks like that, she ruined the character completely. Save yourself and find it for free or skip all together.