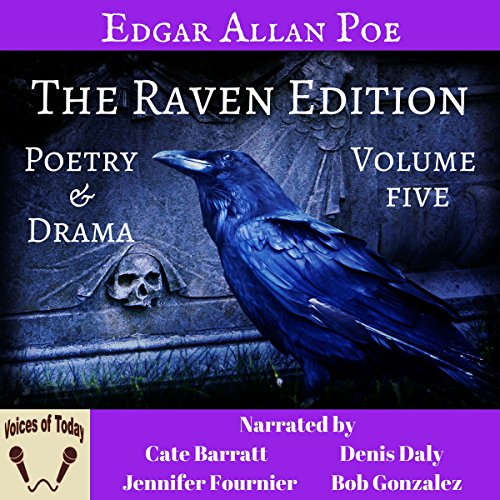 The Works of Edgar Allen Poe, The Raven Edition: Volume 5 - Poetry and Drama

The Raven Edition of the works of Edgar Allan Poe (1809 – 1849) presents his complete literary output in five volumes. In addition to 11 prose pieces, volume five contains all of Poe’s verse and also his only play, the unfinished drama, "Politian". Poe’s poetic output consists of 54 pieces, most of them short, but it also includes four longer pieces, The Bells, Al Aaraaf, Tamerlane, and perhaps Poe’s most iconic poem, The Raven.

The first installment of "Politian" was published in 1835, but, due to discouraging reviews, Poe decided not to complete the play. The plot is based on the Kentucky Incident of 1825, in which Solomon Sharp, attorney general of Kentucky, was assassinated by Jereboam Beauchamp, who accused Sharp of being the father of an illegitimate child borne some years before by Beauchamp’s wife, Anna Cooke. Beauchamp was later hanged and Cooke died as the result of a suicide attempt. Poe transferred the setting to 16th-century Rome and made Politian an aristocrat, rather than an elected official.

What listeners say about The Works of Edgar Allen Poe, The Raven Edition: Volume 5 - Poetry and Drama

I love the works of Poe, the voice talent on this audiobook brings his words to life. I recommend it wholeheartedly! 👍🏽