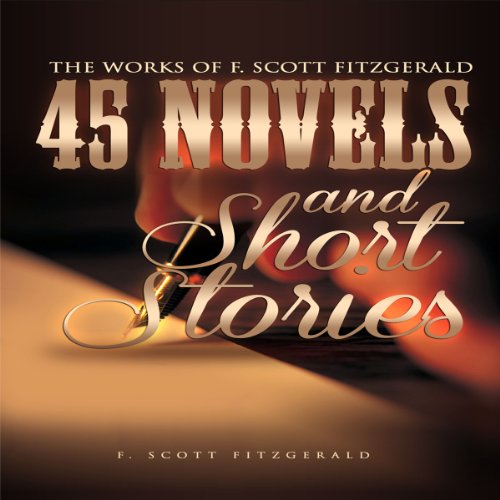 The Works of F. Scott Fitzgerald

Fitzgerald's short stories have themes that not only relate to the problems and culture of the Jazz Age, but also to the promises and despair encountered by the youth, as well as the aging. Love and relationships between two mismatched or unlikely characters are common, such as people who are unlikely to develop a spark of romantic interest between each other.

The plots are usually set in the culture of the upper middle class and the elite, with characters either from this social group or aspiring to become part of it. Being inspired by the events that occurred during The Great Depression and the stock market crash, the stories also involve characters who lose wealth, but who are still trying to maintain their opulent lifestyle.

However, Fitzgerald's stories will remain relevant no matter which era listeners are born into, as finding true love and happiness, despite the situation, will always be a common part of the human experience.

Included in this book:

This Side of Paradise The Beautiful and Damned

The Mystery of the Raymond Mortgage Reade, Substitute Right Half A Debt of Honor The Room with the Green Blinds A Luckless Santa Claus Pain and the Scientist The Trail of the Duke Shadow Laurels The Ordeal Little Minnie McCloskey: A Story for Girls The Old Frontiersman: A Story of the Frontier The Diary of a Sophomore The Prince of Pests: A Story of the War Cedric the Stoker The Spire and the Gargoyle Tarquin of Cheapside Babes in the Woods Sentiment - And the Use of Rouge The Pierian Springs and the Last Straw Porcelain and Pink Head and Shoulders Benediction Dalyrimple Goes Wrong Myra Meets His Family Mister Icky The Camel's Back Bernice Bobs Her Hair The Ice Palace The Offshore Pirate The Cut-Glass Bowl The Four Fists The Smilers May Day The Jelly-Bean The Lees of Happiness Jemina O Russet Witch! Tarquin of Cheapside The Popular Girl Two for a Cent The Curious Case of Benjamin Button The Diamond as Big as the Ritz Winter Dreams

What listeners say about The Works of F. Scott Fitzgerald


I love F. Scott and never mind the readers slow reading style, that's how F. Scott books usually read.
But it became grueling to try and ignore him mispronounce words (WHAT IS WRONG WITH THIS GUY). Eventually I found myself looking for the "next" mispronounced word.

Can't finish with this reader

If you’ve listened to books by F. Scott Fitzgerald before, how does this one compare?

It's a huge compliment to Fitzgerald that his novels come through with power in spite of the poor performance by Wohlert. The Great Gatsby, read by Tim Robbins, was an experience at a completely different, and higher, level.

Would you be willing to try another one of Jay Wohlert’s performances?

Never. Wohlert mispronounces so badly, and so often, as to distract from the meaning of the story. His timing is terrible, sometimes pausing near the end of a sentence, then starting the next with the last words of the former. He sounds like he's reading individual words, without understanding the very story he's reading. Is there no editor/producer to monitor the quality of the performance?

I'm disappointed with Audible for allowing a performance as deadly as Wolhert's onto their reading list.

If Fitzgerald only knew...

Would you listen to The Works of F. Scott Fitzgerald again? Why?

I would listen to some segments again because a well turned phrase is worth keeping.

Not applicable in this review

Would you listen to another book narrated by Jay Wohlert?

In what language? I cannot assuage the "narrator's" ego as he simply does not have command of his own apparent only spoken tongue. The English language should seek succor as Wohlert's massacre of non Anglo-Saxon words and phrases reminds one of the "De Güello" at the Alamo. But, no mercy is shown and the slaughter piques curiosity as to which word is to be mutilated and sacrificed next.In summary, I have listened to other narrated Fitzgerald stories but I will never willingly self inflict another narrated by Wolfort.Before critiquing this review, listen for yourself and then respond.GL

Kindly remember that slander is only classified as slander when what is said is NOT true.

Overall rating is adversely weighted by the anchoring albatross.

Worst performance by a reader I've ever heard

Fitzgerald's prose was mutilated by the narrator. He mispronounced word after word and his imitations of female and other voices were very distracting. I finally had to quit listening to it.

If you’ve listened to books by F. Scott Fitzgerald before, how does this one compare?

Compares extremely unfavorably. This involves his very early work that is not as mature as later works and the narration did a great harm to the work.

Would you be willing to try another one of Jay Wohlert’s performances?

What would have made The Works of F. Scott Fitzgerald better?

The reading is just awful. It's monotone, boring and words are mispronounced. The way he makes the women sound is insulting.

Could easily be outdone by a robot. Not even relaxing. Horribly uncanny. It's as though f Scott returned as a zombie. Really wish I didn't waste my money.

No one is exaggerating: the narration is awful.

What would have made The Works of F. Scott Fitzgerald better?

A better narrator and, assuming there was a director, a better director. The only way to listen to this is at 1.5 X speed. Worse than the blandness of the narrator's voice is his constant miss pronouncement of words and names. It is laughably and, at times, surreally bad.

Since this contained two novels and many short stories, it's hard to say.

Quicker pace and correctly pronounced words and names. How hard was it to consult a dictionary?

The production reeks of amateur hour. You're constantly taken out of the stories because you're scratching your head as to how this got made.

Trust me, and the other reviewers, on the miss pronounced words and names.

Alas, I was in a hurry and I did not read the reviews before purchasing. The narration is dry, wooden, and flat and completely distracting. I lasted ten minutes or so.

Do not listen to this while driving!

Driving while listening to this book can be hazardous. However, if insomnia is a problem that you suffer from, this narrator may be the perfect remedy.

I love FSF, but this listen is robotic, and the narrator mispronounces words with alarming frequency. I couldn't finish.