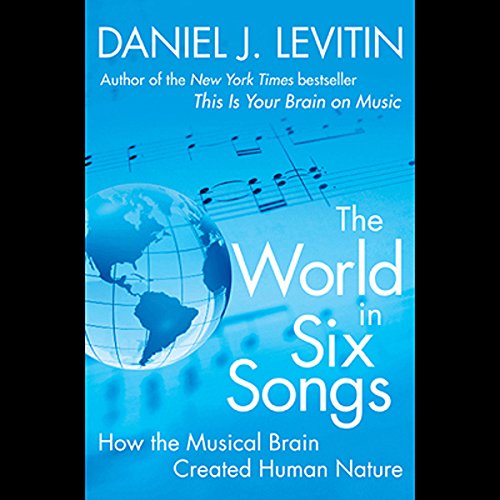 The World in Six Songs

The author of the New York Times best seller and Los Angeles Times Book Award Finalist This Is Your Brain on Music tunes us in to six evolutionary musical forms that brought about the evolution of human culture.

An unprecedented blend of science and art, Daniel Levitin's debut, This Is Your Brain on Music, delighted readers and listeners with an exuberant guide to the neural impulses behind those songs that make our heart swell. Now he showcases his daring theory of "six songs", illuminating how the brain evolved to play and listen to music in six fundamental forms - for knowledge, friendship, religion, joy, comfort, and love. Preserving the emotional history of our lives and of our species, from its very beginning music was also allied to dance, as the structure of the brain confirms; developing this neurological observation, Levitin shows how music and dance enabled the social bonding and friendship necessary for human culture and society to evolve.

Blending cutting-edge scientific findings with his own sometimes hilarious experiences as a musician and music-industry professional, Levitin's sweeping study also incorporates wisdom gleaned from interviews with icons ranging from Sting and Paul Simon to Joni Mitchell and David Byrne, along with classical musicians and conductors, historians, anthropologists, and evolutionary biologists. The result is a brilliant revelation of the prehistoric yet elegant systems at play when we sing and dance at a wedding or cheer at a concert-or tune out quietly with an iPod.

“Fascinating. Provides a biological explanation for why we might tap our feet or bob our heads in time with a favorite song, how singing might soothe a baby, and how music emboldens soldiers or athletes preparing for conflict.” (Associated Press)

What listeners say about The World in Six Songs

The premise is an interesting one, however it could have been said in a page or two.

The author, who is also the nigh-on un-listenable narrator, fills the space to make a complete book by blathering on about stuff that is so obvious as to not be worth saying, or making wild and sometimes inane "scientific" conjectures with no evidence.

The book is not ALWAYS boring and not much fun to listen to, but mostly, it is. At least that was my experience.

The possibility for this to be a wonderful book is fabulous. However, the author rambles, goes off on winding tangents, and mainly name drops throughout this book. This was a book club choice for our group, and the discussion WAS involved, but all in agreement that it basically was a name dropping bore who had a good idea for a book, but the execution was very poor. Not a recommended read/listen.