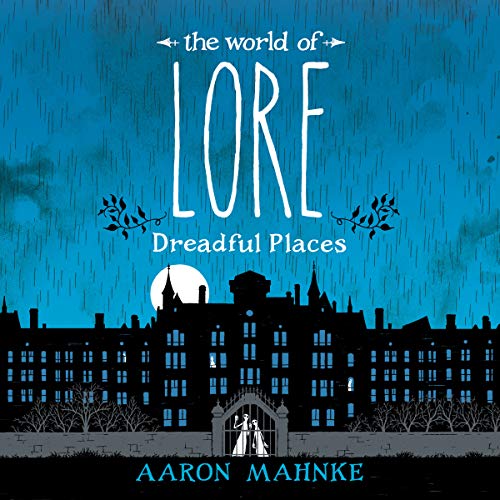 The World of Lore: Dreadful Places

Captivating stories of the places where human evil has left a nefarious mark, featuring stories from the podcast Lore - now a streaming television series - including “Echoes”, “Withering Heights”, and “Behind Closed Doors”, as well as rare material.

Sometimes you walk into a room, a building, or even a town, and you feel it. Something seems off - an atmosphere that leaves you oddly unsettled, with a sense of lingering darkness. Join Aaron Mahnke, the host of the popular podcast Lore, as he explores some of these dreadful places and the history that haunts them.

Mahnke takes us to Colorado and the palatial Stanley Hotel, where wealthy guests enjoyed views of the Rocky Mountains at the turn of the 20th century - and where, decades later, a restless author would awaken from a nightmare, inspired to write one of the most revered horror novels of all time. Mahnke also crosses land and sea to visit frightful sites - from New Orleans to Richmond, Virginia, to the brooding, ancient castles of England - each with its own echoes of dark deeds, horrible tragedies, and shocking evil still resounding.

Filled with evocative illustrations, this eerie tour of lurid landmarks and doomed destinations is just the ticket to take armchair travelers with a taste for the macabre to places they never thought they’d visit in their wildest, scariest dreams.

The World of Lore series includes:

“Fans of the Lore podcast won’t want to miss this latest volume in the creator’s series, a collection of illustrated versions of both rare and well-known stories about ‘lurid landmarks and doomed destinations.’” (io9)

“Dreadful Places is a delight for Lore fans and newbies alike. In the book, [Aaron] Mahnke visits places around the world that are steeped in a supernatural legacy.” (Refinery29)

What listeners say about The World of Lore: Dreadful Places

After hearing all of the ads for the books on the podcast I gave this a shot expecting some new original stories. Very let down that it is just a collection of podcasts I have already listened to. Why aren’t the other reviews mentioning this?

If you listened to the podcast then you’ve already heard this book.

If you love the podcast, you will love this book.

I have been listening to Aaron Mahnke's podcast, Lore, for a few years now. The stories he puts together are not just well written, but also well preformed by the author as well.

Sarah Winchester wasn't crazy, she moved across the country with her large extended family. Large family=large house but her family moved back. I'm sure it's better for business to perpetuate that she was mad but come on.

There are so many accounts regarding the belle witch and the fact the father was molesting the oldest daughter.

I've been a fan or Lore for years but the research is either sub par or the editing is trying to spin untruths.

I am three quarters through this book and I am loving both the stories AND the writing!

However, the narration is HORRIBLE.

There are fantastic witty quips that are absolutely 'blink-and-you'll-miss-it' because of the lack of even a semblance of flux in intonation.

I even found myself internally repeating sentences to give them meaning and flavor.

I appreciate the artistry of the writer of this novel.
I loathe it's verbal delivery.

Read the book. But by God's good graces, PLEASE don't listen to it.

Interesting and thought provoking. I would recommend this read to anyone who likes short stories.

I've put up with some annoying narrators in order to finish a book that I otherwise enjoyed. This was one of the worst.
Aaron Mahnke's stilted, halting, uber-Shatner narration was UNBEARABLY difficult to listen to.

A real shame, because this book isn't that bad - the tales and stories included are genuinely interesting and some are kind of spooky. I consider them campfire stories - not really "scary", per se, but just enough of a spook factor that you can imagine telling them to a group of friends around a campfire. Nervous laughter may ensue, a little ribbing of "oh c'mon, you don't really believe that, do you?", and maybe some one-upmanship as others try to top the tale with their own horrifying stories, but nobody will really end up with nightmares.

If you like spooky "true" stories, I do recommend the book; however, I could only listen to this after speeding up the narrator 1.5 times, and even THAT was difficult to get through. If vocal tics and stilted narration irritate you, then this is NOT the audio book for you!

the narrator was painful to listen to. but with more practice, I'm sure he'll be greaf!

It's everything you've came to love about lore

Aaron Mahnke never disappoints, it's lore categorized, sure it's a lot of the podcast, with some extras, but it's still well worth every penny, I wish he would have read his original books he's released like he did with the 3 lore inspired books, honestly you can't do better than the man himself reading with the style we've all came to know and love. I look forward to buying the third book asap. If you've never experienced lore, these books are a fantastic jumping off point and extremely good for long trips. very very very satisfied!

This is the second book by Aaron Mahnke that my son and I have gone through. We preferred the first Lore book to this one, but that is not because this wasn't good. The content in Monstrous Creatures was just a bit more engaging for us. I love how he tells stories of these events/places and what emphasis he puts on them is not biased towards trying to get you to believe or not, it is just discussion. We will probably be picking up Wicked Mortals next and checking that out as well.

I love everything Lore. Aaron always does wonderful job storytelling. great listening for a work day.