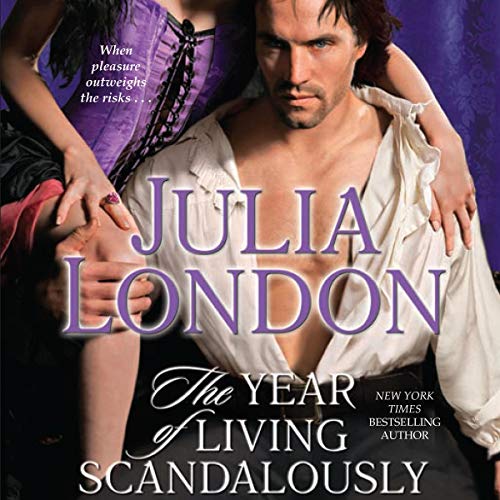 The Year of Living Scandalously,

The Year of Living Scandalously,

When Declan O’Connor, Earl of Donnelly, arrives at Hadley Green to meet with Lily Boudine, the new countess of Ashwood, he knows instantly that the lovely woman who welcomes him is not who she pretends to be. In an attempt to avoid an unwanted marriage, Keira Hannigan has assumed her cousin’s identity and is staying at the estate while Lily is abroad. When Declan threatens to expose her, Keira convinces him to guard her secret, then enlists him in her investigation of the missing jewels, for she now believes an innocent man was hanged.

Unable to deny the beautiful, exasperating Keira - or their simmering passion - Declan reluctantly agrees. But neither is prepared for the dangerous stranger who threatens to reveal Keira’s lies... and Declan knows he must protect Keira at all costs, for she is the woman who now owns his heart.

I truly enjoyed this book until I got to the end and found much of the plot left unresolved. I would not have found this nearly as annoying as I do if the second book had been available. Unfortunately it wasn't, and still isn't.

I love listening to Justine Eyre, but I just couldn't get through this book! I think my biggest problems were with the simplemindedness of the heroine and the fact that every time the hero wanted to embrace the heroine, he went and had a liaison with a different women! what happened to self restraint!? I did want to know what happened on the end though, so I skipped to the final chapters and what do I find but a cliffhanger! No, just no. In my personal opinion I think this book is a waste of time unless you like immature, thoughtless heroines and loose hero's who take no real responsibility for their own actions and have no problem sleeping with one woman while wanting another.

No sense of the historical period

What could Julia London have done to make this a more enjoyable book for you?

She could have learned more about the historical period in which this novel is supposed to take place.

The performer was okay. I look forward to hearing her read some better material.

Where does The Year of Living Scandalously, rank among all the audiobooks you’ve listened to so far?

I think this is a typical historical romance novel. It's not GREAT, but it's not bad. There are characters that I definitely enjoyed including Keira.and her mischievous twin sisters. Declan is a man of sensibility and tries to help Keira out the mess she's gotten herself into. I like that there is a bit of a mystery and I loved the introduction of Lord Eberlin. There were a few places where I laughed out loud. Simply an enjoyable listen.

Have you listened to any of Justine Eyre’s other performances before? How does this one compare?

I could definitely listen to this book in one sitting. I enjoyed the book although I didn't have very strong feelings about the book. It was simply enjoyable.

I would not recommend this book. The purpose of the book seems to be to set up the next book in the series. The hero is dull and uninteresting, and dim witted where the heroine is concerned. The heroine isn't very interesting either. You are left at the end wondering why the author didn't just write one story that was entertaining instead of trying to milk her idea for two books.

I probably won't finish this one. I usually like Julia London books but the heroine Keira and her cousin Lily got on my nerves! They were silly, disobedient, vain and annoying. Maybe it gets better toward the end but I'm not inclined to find out. Keira just does whatever she wants, no matter the consequences.