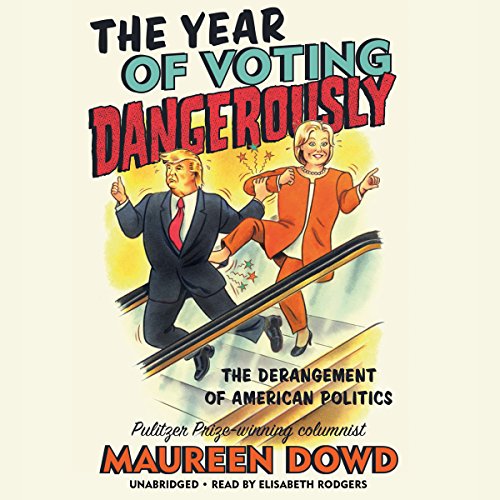 The Year of Voting Dangerously

Written by: Maureen Dowd
Narrated by: Elisabeth Rodgers
Try for $0.00

Maureen Dowd's incendiary takes and takedowns from 2016 - the most bizarre, disruptive and divisive Presidential race in modern history.

Trapped between two candidates with the highest recorded unfavorables, Americans are plunged into The Year of Voting Dangerously. In this perilous and shocking campaign season, The New York Times columnist traces the psychologies and pathologies in one of the nastiest and most significant battles of the sexes ever. Dowd has covered Donald Trump and Hillary Clinton since the '90s. She was with the real estate mogul when he shyly approached his first Presidential rope line in 1999, and she won a Pulitzer Prize that same year for her penetrating columns on the Clinton impeachment follies. Like her best-sellers, Bushworld and Are Men Necessary?, The Year of Voting Dangerously will feature Dowd's trademark cocktail of wry humor and acerbic analysis in dispatches from the political madhouse. If America is on the escalator to hell, then The Year of Voting Dangerously is the perfect guide for this surreal, insane ride.

What listeners say about The Year of Voting Dangerously

Ms. Dowd's book is a forum to display her utter contempt for Hillary Clinton based upon anything but policy, work ethic or competence. Instead she focuses on her insecurity that resulted in her e-mail debacle and the support of her husband during his adulterous trials with congress and a Special Prosecutor. Stating wrongfully that Secretary Clinton never apologized for her extra e-mail server, Ms. Dowd concentrates on her perceptions of Ms. Clinton's social failings and never really addresses her plans for America in contrast to "nice guy" Donald Trump. Ms. Dowd has no sympathy for a woman who was attacked fo r years by Capital Hill Republicans who ultimately (like the FBI with the private server) cleared her of any wrongdoing about the deaths in Bengazi. She writes virtually nothing about his clear lies about his own record, his demeaning attitude towards Ms. Clinton (lock Her Up) and other critics. Then she includes an "aside" from some unknown relative and spends much of the book revealing secrets about her and George H. W. Bush that have nothing to do with the theme and were probably conveyed to her in private. It is cringe worthy. It is no wonder that she has now called President Barack Obama "an Ivy League East Coast cerebral elitist who hung out with celebrities." Really? Ms. Dowd's view of politics is bizarre, filtered and wrong, some of which could be absolved by beautiful prose and wit. Both such gifts elude her.

WOW. What a Snarkfest.

Would you try another book from Maureen Dowd and/or Elisabeth Rodgers?

While Maureen Dowd is a wonderful writer, she is more than snarky, mean and vindictive to both sides of the isle. There is not much to come away here.

How unlikable anyone in Washington or running for office is.

There is a lot of repetition thoughout the book.

Creates sense in a race where none exists

If you're looking for political muckraking, Clinton and/or Trump hack jobs, or scandalous expose on one or the other participants in the Strangest Election Ever, you won't find them in Maureen Dowd's book, "The Year of Voting Dangerously."
What you will find is fair and balanced background into the circumstances that created, and the parties responsible for the two candidates for President that the majority of the country just doesn't like.

What disappointed you about The Year of Voting Dangerously?

I was so excited that there was a new book out by Maureen Dowd. I had no idea it was merely a compilation of her columns, which I have already read. Nevertheless, I started to listen - but had to stop after so many key phrases were repeated in several places. It was positively distracting.

Has The Year of Voting Dangerously turned you off from other books in this genre?

No, I enjoy books on politics.

I cannot recommend the book to anyone. If they have been reading Dowd, there is nothing new here. If they are new to her, the repeated phrases and anecdotes will still stand out.

More relevant to 2018 politics than expected

This book about the 2016 election has staying power, and insights that still hold up even two years later. Well written and fast moving.

Could have been at least a couple chapters shorter but she repeats herself verbatim so much it drags on and on and on, oh did I say "and on"....

This book was poorly written and overly repetitive. It was less tied to the title that to the writer's narcissism. I would not recommend to others regardless of political leanings.