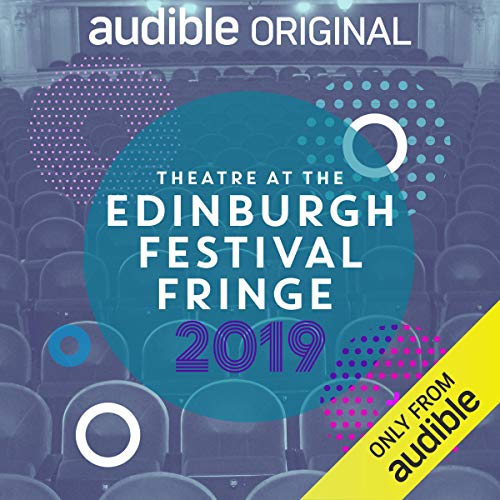 Theatre at the Edinburgh Festival Fringe 2019

If you didn’t manage to make it to the Edinburgh Fringe Festival in 2019, Audible has you covered!

We selected a cross section of some of the most exciting new plays of the year, invited the actors and directors into the studio and recorded stirringly intimate audio performances of the plays just for you....

Portions of this audio drama contain explicit content, with mature language and themes that some listeners may find disturbing. Listener discretion is advised.

For All I Care

Clara and Nyri. Two very different women. Two complicated lives. Both having a very bad day. Mental health nurse Nyri's woken up hungover with a younger man. Meanwhile, Clara has developed a compulsive wink and can't remember if she's taken her meds. Nyri needs to get to Ebbw Vale Hospital via Greggs and Clara is dodging signs telling her - rather rudely - to kill herself, so she can get cracking with her shoplifting list for the Devil. Interweaving and unexpected connections collide in this fast-moving, touchingly funny one-woman show. The live theatre production of For All I Care was commissioned by The National Theatre Wales and performed at the Edinburgh Festival Fringe, United Kingdom, in 2019.

Archaeologist Nuala unearths a skeleton and her ordered life starts to unravel. Digging into the mystery of the bones, can she handle the chaos of what she discovers? Based on personal experience, this is an uplifting and compelling story about OCD, dungarees and being weird but not a weirdo. The live theatre production of Ladybones was performed at the Edinburgh Festival Fringe, United Kingdom, in 2019.

Johnson Aoife's hungry and bored. Cillian makes a mean cheese toastie. As boredom and hunger are satisfied by half an hour in Cillian's bed, Aoife's life changes forever. As social and political upheaval grips her country, what hope does Aoife have to regain control? A timely, politically charged show written by award-winning writer Rachel Trezise at the time of the historic referendum of the eighth amendment in Ireland, Cotton Fingers takes us on a journey from Belfast to Cardiff. The live theatre production of Cotton Fingers was commissioned by The National Theatre Wales and performed at the Edinburgh Festival Fringe, United Kingdom, in 2019.

Lucy Salmon, an introverted lover of mythology, has 10 days to prepare for her first live action role play event. A kaleidoscopic adventure into the fantastical unleashes Lucy's inner roar! A bittersweet comedy about love, mystery and heroes explores, in all its flaws and contradictions, the existence of a woman who always finds herself on life's fringes. Sometimes the quietest people have the loudest and most exhilarating tales to tell. Additional sound design by Berri George. The live theatre production of LARP was produced by Barefaced Theatre and performed at the Edinburgh Festival Fringe, United Kingdom, in 2019.

What is the cost of a typical night out? An ex-serviceman who has spent his life fighting for his country finds new battles in a society fighting against him. From the makers of 2018 hit Queens of Sheba comes this powerful new play by Ryan Calais Cameron confronting the daily tensions experienced by black men as they negotiate life, while constantly feeling like their own lives are on the line. Typical uncovers the man and the humanity behind a tragic real-life story, challenging traditional conceptions of black manhood and highlighting the crisis of identity consuming Britain today. The live theatre production of Typical was produced by Nouveau Riche in association with Soho Theatre and performed at the Edinburgh Festival Fringe, United Kingdom, in 2019.

If you or someone you know is affected by any of the issues mentioned in this podcast, please contact the charities below:

What listeners say about Theatre at the Edinburgh Festival Fringe 2019