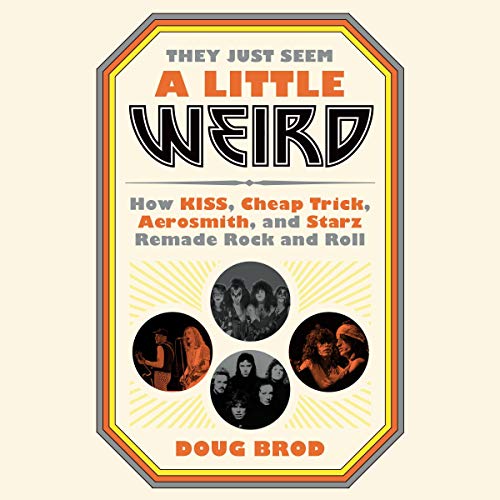 They Just Seem a Little Weird

Written by: Doug Brod
Narrated by: Eric Stuart
Try for $0.00

It was the age when heavy-footed, humorless dinosaurs roamed the hard-rock landscape. But that all changed when into these dazed and confused mid-'70s strut-ted four flamboyant bands that reveled in revved-up anthems and flaunted a novel theatricality.

In They Just Seem a Little Weird, veteran entertainment journalist Doug Brod offers an eye- and ear-opening look at a crucial moment in music history, when rock became fun again and a gig became a show. This is the story of friends and frenemies who rose, fell, and soared once more, often sharing stages, studios, producers, engineers, managers, agents, roadies, and fans-and who are still collaborating more than 40 years on.

In the tradition of David Browne's Fire and Rain and Sheila Weller's Girls Like Us, They Just Seem a Little Weird seamlessly interweaves the narratives of KISS, Cheap Trick, and Aerosmith with that of Starz, a criminally neglected band whose fate may have been sealed by a shocking act of violence. This is also the story of how these distinctly American groups - three of them now enshrined in the Rock and Roll Hall of Fame - laid the foundation for two seemingly opposed rock genres: the hair metal of Poison, Skid Row, and Mötley Crüe and the grunge of Nirvana, Alice in Chains, and the Melvins.

Deeply researched, and featuring more than 130 new interviews, this book is nothing less than a secret history of classic rock.

"They Just Seem a Little Weird tells the whole strange story of how '70s rock conquered the world, from Detroit Rock City to Budokan. Doug Brod brilliantly captures the moment when loud guitars collided with old-school showbiz glitz and helped create the future." —Rob Sheffield, author of Dreaming the Beatles

"In uncovering the zillion interconnections between three of the most popular and influential rock bands of their era-and one that shoulda, coulda, woulda been-They Just Seem a Little Weird compellingly embodies a familiar but essential life lesson: it's a small world after all, so be nice to everyone you meet, because you might do a reunion tour with them 40 years from now." —Michael Azerrad, author of Our Band Could Be Your Life: Scenes from the Indie Underground 1981-1991

"They Just Seem a Little Weird is a wildly entertaining study of four Me Decade bands, showing how their influence would come to shape successive generations and genres of music. Doug Brod delivers the perfect balance of reportage, reminiscence, and rock-and-roll excess. Deeply researched, evocatively written, and utterly enjoyable-this is a surprisingly essential work of pop culture history." —Bob Mehr, author of TroubleBoys: The True Story of the Replacements

What listeners say about They Just Seem a Little Weird

Sure enjoyed this book and would recommend to anyone that is a fan of any of these performers. I feel that Cheap Trick is one of the most under appreciated rock bands. And this book brings much deserved attention to their overall contributions and how they have influenced so many.

What a great listen! Two of my favorites, Kiss and Aerosmith are big parts of this book and I heard so many stories about each that I never knew. Was also great tales about Cheap Trick and Starz that made me want to here more of their music. Many other bands are mentioned as they relate to the above 4. Even if you are not a fan of one or any of these, I would recommend this book, if you love rock and roll and it’s rich decadent history 🤘🏻

I’ve always felt that the music industry is well entangled within itself. But I guess I didn’t have any idea how tightly these folks get to know each other and work with one another. I feel the book was well researched and brought me into the webs of the insiders. Unlike some audio books, this one is very well read and enjoyable to the listener.

this was a cool listen, lots of perspective and history for all of the bands and their timeline.

it was a little too long in some places, but def worth a credit if you like any/all of these bands

Not great but not bad

Good story for those who remember the times... sometimes hard to keep up with

Nobody is likely to claim this is a great book--but it does help fill in informational gaps for avid fans. I've never heard editing mistakes like this on ANY audible title. It's almost like nobody paid attention after Chapter 20. Repeated phrases and false starts left in the final product. I counted at least six obvious errors, and one clipped word uncorrected. Stuart has a good voice for this content, though.
And the elephant in the room: Starz?!

This is really a fun book. Having grown up with all these bands I thought I knew most of their history. But there is a lot in here to like and that surprised me. In terms of the reading, I’m not sure who this falls on but there were so many errors in the pronunciation of names of bands that the minute you hear one it takes you out of the listen and back TRL he reality that this is just an actor reading a book who probably has little real knowledge of the subject matter. The mangling of Mo Ostin’s name comes to mind. Maybe the read would be a better way to go on this one. Hopefully they can go in and edit the bad bits on the AB.

The stories are jumbled, in no reasonable order, but pretty good. There’s some great info and insight.
The overall narration isn’t terrible. But, oh my god, it seems that every name is terribly mispronounced. Not even close. That lack of detail goes a long way to negate any credibility the actual book possesses.

Is it the narration? Is it the writing?

Sadly, it’s hard to decipher which is worse. The reader’s voice certainly doesn’t fit the subject matter, but making the narration even worse are his misplaced inflections and (seemingly) ignorance of the genre, and an inability to impart any sort of anticipatory tone to carry your interest.
The writing bounces around so badly it’s not even fun to follow or be able to look forward to the next story. Sure it’s a technique of weaving multiple storylines, but this is just flat. Also, it’s okay to set up a new character; here, sometimes it happens, other times you fly blind. But, I’ll revisit the narration. Half-way through the book and I simply had to stop listening and write this review of this lackluster book. The book is probably “OK” were you to read it yourself.

struggled to finish. Maybe it was the Starz stuff so I didn't know who they were talking about half the time. just very OK for me. didn't really see the point of covering these band in this particular time period