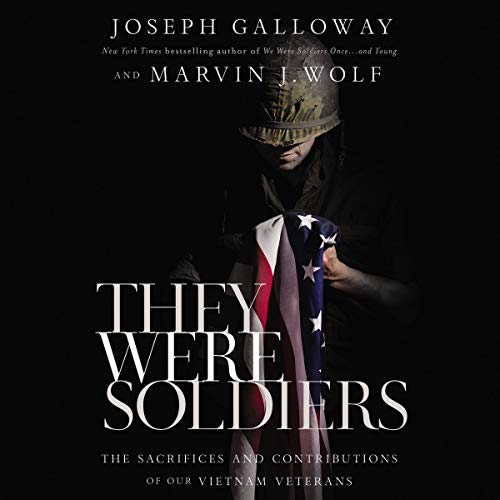 They Were Soldiers showcases the inspiring true stories of 48 Vietnam veterans who returned home from the "lost war" to enrich America's present and future. In this groundbreaking new audiobook, Joseph L. Galloway, distinguished war correspondent and New York Times best-selling author of We Were Soldiers Once...and Young, and Marvin J. Wolf, Vietnam veteran and award-winning author, reveal the private lives of those who returned from Vietnam to make astonishing contributions in science, medicine, business, and other arenas, and change America for the better.

For decades, the soldiers who served in Vietnam were shunned by the American public and ignored by their government. Many were vilified or had their struggles to reintegrate into society magnified by distorted depictions of veterans as dangerous or demented. Even today, Vietnam veterans have not received their due. Until now.

These profiles are touching and courageous, and often startling.

They include veterans both known and unknown, including:

Engrossing, moving, and eye-opening, They Were Soldiers is a magnificent tribute that gives long overdue honor and recognition to the soldiers of this "forgotten generation".

What listeners say about They Were Soldiers

I myself have done 31 plus years in the service and just recently retired and I love nothing more then American wartime history. This book told amazing stories of many of our nations heros not too many Americans know about. This isn't a book with one story but a book of many stories. The authors captured the individual stories beautifully and I've long had a love for our Vietnam veterans this book deepened that love for those heros from that time in our history.

If you are willing to take the time to listen to this wonderful book you should truly have a renewed appreciation for the opportunities afforded to us all by our great nation and a reminder of the talent of the author as well.