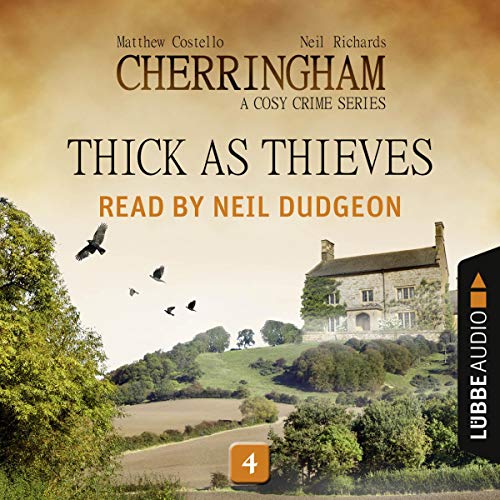 Two Cherringham locals, roaming a farm with metal detectors, discover an amazing treasure - a silver Roman plate worth millions. They must share the reward with both the farmer and the owner of the land, the formidable Lady Repton, but there will be plenty for everyone. That night, while the village pubs do a roaring trade, archaeologist Professor Peregrine Cartwright offers to keep the plate safe in his massive wall safe. But when the British Museum expert arrives to verify the find next morning, the safe is empty! Police blame a notorious gang of art thieves operating in the county. But Jack and Sarah have other suspicions...

Cherringham is a serial novel à la Charles Dickens, with a new audio episode released every two weeks. Set in the sleepy English village of Cherringham, the detective series brings together an unlikely sleuthing duo: English web designer Sarah and American ex-cop Jack. Thrilling and deadly - but with a spot of tea - it's like Rosamunde Pilcher meets Inspector Barnaby.

Each of the self-contained episodes is a quick listen for the morning commute, while waiting for the doctor, or when curling up with a hot cuppa. For fans of Agatha Christie's Miss Marple series, Lilian Jackson Braun's "The Cat Who" series, Caroline Graham's "Midsomer Murders", and the American TV series "Murder She Wrote", starring Angela Lansbury.

Co-authors Neil Richards (based in the UK) and Matthew Costello (based in the US), have been writing together since the mid 90's, creating content and working on projects for the BBC, Disney Channel, Sony, ABC, Eidos, and Nintendo to name but a few. Their transatlantic collaboration has underpinned scores of TV drama scripts, computer games, radio shows, and - most recently - the successful crime fiction series Cherringham. The narrator of the audiobook, Neil Dudgeon, has been in many British television programmes including the roles of "DCI John Barnaby" in "Midsomer Murders" and "Jim Riley" in "The Life of Riley". He is also known for his film roles in "The Nativity", "Sorted" and "Son of Rambow". In 2012 Dudgeon starred as "Norman Birkett" on BBC Radio 4's Afternoon Play series written by Caroline and David Stafford.

What listeners say about Thick as Thieves

Brilliant short stories that reveal a little more of these already very real characters from an established series of novels. The "shorts" easily stand on their own, however, because the two main characters are so well drawn, and 'at ease' in a sense, that they just inhabit the short episodes, and make them work without a lot of description needed. ’The whole series: setting; plot-lines,; relationships; dialogue, is very real. ‘Cozy’ if you must (Audible editors!) but without the artificial sweetener--thankfully no cats, quilts, apple crumble, etc; just once in a while the perfect martini and grilled sirloin Main characters Jack and Sarah are a partnership along the lines of Nick and Nora Charles, or "Falco and Helena Justina in the English countryside": Jack, a retired NYC detective, is someone you know, or wish you knew, and Sarah, a single parent running a small design business (how realistic a design business for the time being: one big client is a local funeral home). In a new twist by the authors : ) a female character who is capable, serious, (kind, thoughtful, articulate...polite!!!) and utterly reliable, yet never boring. They may not be a couple (not even after nearly 30 books) but there's some very subtle, unmistakable chemistry in the wings . He is charming and forthright, while retaining the natural suspicion and cynicism of a long time homicide detective; she is learning to be both. Incongruously, for Sarah I keep seeing Duchess Kate undercover in Cherringham (I know... but "coping gracefully with every imaginable challenge... while not exactly thrilled to be the centre of attention"- doesn't that sound familiar : ) --and learning to drink Scotch.

I really enjoy these short stories that are perfect for waiting rooms or puttering with chores. This episode is focused on the discovery of a treasure of a Roman hoard and the needy and greedy involved. The ongoing sleuthing involves a retired and widowed older NYPD homicide cop who is finding life in the English countryside a fair antidote to his mourning and a local recently divorced woman who has returned to her hometown and near her parents (with her children) who make a good sleuthing pair.
Voice actor Neil Dudgeon has been an asset to my listening pleasure.