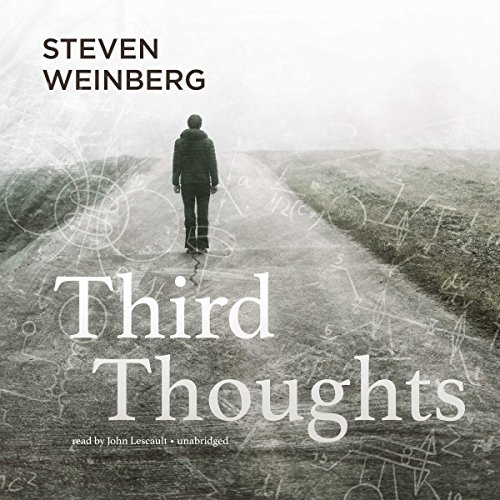 Written by: Steven Weinberg
Narrated by: John Lescault
Try for $0.00

A wise, personal, and wide-ranging meditation on science and society by the Nobel Prize-winning author of To Explain the World.

For more than four decades, one of the most captivating and celebrated science communicators of our time has challenged the public to think carefully about the foundations of nature and the inseparable entanglement of science and society. In Third Thoughts, Steven Weinberg casts a wide net: from the cosmological to the personal, from astronomy, quantum mechanics, and the history of science to the limitations of current knowledge, the art of discovery, and the rewards of getting things wrong.

Winner of the Nobel Prize in Physics and author of the classic The First Three Minutes, Weinberg shares his views on some of the most fundamental and fascinating aspects of physics and the universe. But he does not seclude science behind disciplinary walls or shy away from politics, taking on what he sees as the folly of manned spaceflight, the harms of inequality, and the importance of public goods. His point of view is rationalist, realist, reductionist, and devoutly secularist.

Weinberg is that great rarity, a prize-winning physicist who is entertaining and accessible. The essays in Third Thoughts, some of which appear here for the first time, will engage, provoke, and inform - and never lose sight of the human dimension of scientific discovery and its consequences for our endless drive to probe the workings of the cosmos.

What listeners say about Third Thoughts

Essays that remind me of my high school physics teacher... the dullest instructor in history.

No need to have a PhD in physics.

Extremely well written and very well read. Mister Weinberg succeeds in making the abstract counter intuitive ideas behind quantum physics a good deal clearer, at least to someone with my limited intelligence.

Irrespective of whether you agree with his ideas, Steven Weinberg conveys in this compilation of articles fetching points of view about the history of science, state-of-the-art physics and cosmology, metaphysics, or public matters. Pieces about the standard model of particle physics might turn out to be challenging for the average reader.

I was expecting scientific insight. I got sour grapes by an academic dunderhead who doesn’t accept that manned space flight is the primary emotional foundation for all federal spending on science.