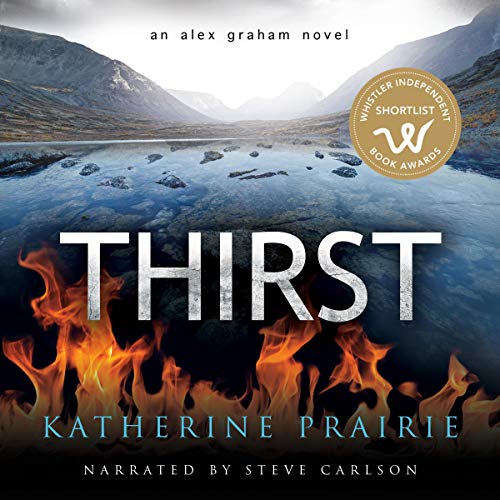 Written by: Katherine Prairie
Narrated by: Steve Carlson
Try for $0.00

Explosive violence rocks Canada's Slocan Valley after the shooting deaths of three teenagers in a bombing attempt at the Keenleyside Dam. A joint US-Canada military force locks down the Valley to protect Columbia River dams critical to both countries but martial law incites more violence.

Geologist Alex Graham refuses to let politics stand in her way. She evades military patrols to slip into a restricted zone in her hunt for a silver mine to claim as her own. But her plans are derailed by an intentionally set fire that almost takes her life.

Someone wants her out of the Slocan Valley.

When Alex discovers a gunshot victim in an abandoned mine, she fears she could be next. But she's never been one to wait for trouble to come to her and she tracks a suspicious man seen once too often in the lonely mountains.

All eyes are on the dams, but the true threat lies elsewhere.

What listeners say about Thirst

The author based the book on existing treaties between Canada and the United States. Very plausible scenario with believable characters. It's great to read about a strong heroine in a non-traditional job. Pacing was excellent. Plot was interesting. Can't wait to listen to the next in the series.