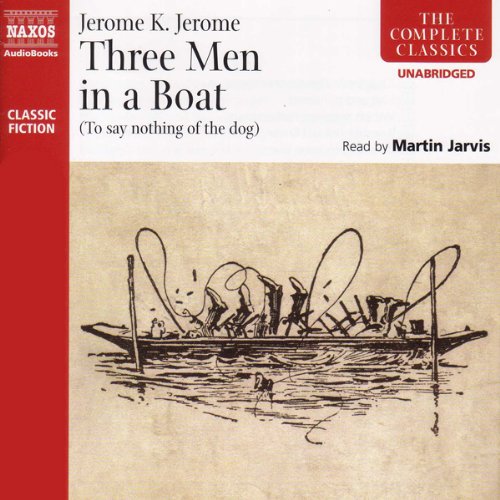 Three Men in a Boat (To Say Nothing of the Dog)

Here is one of the greatest English comic novels read by incontrovertible king of English comic audiobook readers, Martin Jarvis. Three men, worried about their health and in search of different experiences, set off 'up the river' in a boat. Jerome's delightful novel, dating from 1900, paints a vivid picture of innocent fun.

The first time I became aware of "Three Men In A Boat" was in the late seventies or the early eighties when I saw a much-shortened film version which included in it's cast Tim Curry and Michael Palin. I do remember it was very funny. I forgot about it though until I heard part of this audio version on satellite radio. I had to hear the whole thing and I was glad I purchased a copy from Audible. It must be one of the funniest novels ever written with it's dry "English" humor set against the absurd and exagerrated scenarios and the "over-the-top, wild opinions. There is also a true sense of love of the river Thames and of English history.

Montmorency...but I don't want to give away who

Have you listened to any of Martin Jarvis’s other performances before? How does this one compare?

No- but when I tried the other excerpts, I had to admit that Jarvis' rendition was far and away superior...at least for my tastes.

I was pleasantly surprised by unexpected turns in the descriptions or storyline that made me chuckle or laugh. Some of the descriptive prose carried me away, enabling me to vividly imagine different times and places. The ebb and flow of comedy and description kept my attention well.

This is wonderfully funny period book. If you don't like British accents or books about British life in the 19th century, then give it a miss. But if you like things like Jeeves and Wooster (by P.G. Wodehouse), or Rumpole, or some of the BBC comedies available on TV, you might give this a try. It is a mixture of absurb situations and absolutely beautiful descriptive prose! You have to really sit and listen, though, to appreciate it. Listening to this book is like having a friend sitting by the fireside relating his thoughts and his history. The interplay of comedic moments with some of the most beautiful prose I have ever heard makes this book a special favorite. (Stick with it into chapter two to hear the descriptions of the river to experience the beautiful prose.) It is possible that some people might be irritated by the narrator, and this is, of course, strictly a matter of personal taste. I happen to feel that Jarvis has just the right personality, ability to express the characters and situations, and manner to narrate this audiobook. But, as I said, sometimes the enjoyment of the narrator is strictly personal and has little to do with the skillfulness of the narration. Jarvis sounds like he is actually the author relating his own experience and thoughts. Some of the other versions sounded like just narration. The music between chapters is just wonderful. It helps draw one into the proper mood of things. Can you tell that I thoroughly enjoyed this very clever old story?

Unique, gentle humour for all

'Three Men In A Boat' was a hit when published and it is still now. The story of George, Harris and Jack rowing up the Thames river for their summer holiday comes full of comical moments and delightful observations. Most importantly, you will laugh out loud lots and lots. This book is not just for children, it is for all.

This is just a classic. It's a great story to listen to and the narration was excellent. Perfect production.

This book was originally written in 1889, but only proves that English wit has stood the test of time. If you like English humour, you'll love this book -- I'd have NEVER guessed it was old. And the narrator, Martin Jarvis, provides a thoroughly enjoyable, and listenable, accounting.

Another amazing thing -- according to Wikipedia, this book was "originally intended as a serious travel guide, but the humorous elements took over". Incredible!

This classic proves that great literature needn't be hard work. It is light, funny, thoughtful, informative and , occassionally , deep. There are magnificent one liners and great characters - especially Montmorency.

The reading is excellent. Martin Jarvis was born to read English humour and when the stuff he is reading is a as good as this the only problem is that there isn't more of it.

had first listened to this wonderful book in a distracted manner... only realizing how great it was toward the end ... so i listened to it again "straight away", as the Brits would say~
although the references to "the bustle of the 19th century" sound quaint, it really brings home how "the more things change, the more they stay the same"... Jerome's witty stories illustrating human nature are so funny and so right on, i laughed out loud. the historical notes along their travelogue down the Thames are also wonderful, as the 3 young men take a boat outing one summer. just a wonderful treat~ i recommend it highly! (it does help to understand British English).

Without a good story life would be boring

"The person is smart. People are dumb, panicky, dangerous animals, and you know it!" - Agent K, Men In Black

But let's face it, we're all, at one time or another, selfish, dangerous idiots. When we drive too fast on the highway we shake our head at all the idiots driving too slow as we pass them and then shake our fists at the lunatics passing us in turn. We give ourselves up to every degree of cognitive dissonance when we say, for example, we believe in nuclear energy ... but not in my backyard (remember Carlin's NIMBY?); let some other idiots deal with the mess. When we lose it's because someone else cheated but when we win it's because of our skill. Our children are perfect saints; your kids are spoiled brats incapable of even rudimentary biological functions. We might think everyone should pass a test to vote in an election, except us, of course, because we are reasonably informed and capable of rational decisions in all weighty matters.

We're idiots, every one, and this book makes the case for it.

There's a scene near the end of the book where they come upon the dead body of a woman whom, we learn, has killed herself because she has no prospects in life and cannot hope to provide for her child. All her friends and family have turned her out (why exactly we do not know) and so she drowns herself in the very same river our three idiot heroes drift along with not a care in the world. The scene serves as a stark reminder of our own callousness, even if we have no idea we are being cruel. Shūsaku Endō, in his novel Silence tells us “Sin, he reflected, is not what it is usually thought to be; it is not to steal and tell lies. Sin is for one man to walk brutally over the life of another and to be quite oblivious of the wounds he has left behind.”

The climax of the novel (if you could call it a climax in the traditional sense), is the literal shattering of a lie, in this case a trophy fish hanging on the wall that everyone claims was their miraculous catch. In the end we learn it wasn't even a fish at all, just a piece of plaster art.

Yet the novel, funny as it is (and it's very funny) is not just trying to make a point that lying is bad, either. Lying is good, too. Lying is good because it makes a story better, it makes life more enjoyable, more fun. If I told you I caught one fish that would not be an interesting story, however, if I say I caught 20 fish, and each one I battled with for over an hour upon a stormy sea, and they were all Sturgeons, then that's a story. Even if you know I'm lying, it really only matters how well I tell the story. Without a good story life would be boring, there would probably be no real art, no comedy, no fun.

So how do we reconcile the two: lying vs. fun?

Well, we can't really, at least not when we think about too much. We have to pick our battles, we have to be our own, as Einstein theorized, relativistic observer upon which everything else orbits. If we start looking at our lives through another person's eyes then we might see what total idiots we are, see how callous we are, how rude and hostile, too. But how can we possibly go through life self analyzing ourselves through other people's perception of us? We might as well toss ourselves in the nearest river!

The whole argument reminds me of what our parents always told us when we were eating dinner and hand't finished, "There are starving children in Africa; don't you know how lucky you are!"

Well of course I don't know how lucky I am because I've never been a starving African child. How could I ever hope to relate! How could that child possible relate the other way back to me living in a world where we have so much food in the refrigerator that it blocks our view of more food in the back that we forget it's there and it all goes bad. We have so much food it blocks our view of our food! It's absurd all the way around.

Now I'm not suggesting the author had all this immediately in mind when he wrote this wonderful book, however, it does answer why the book feels so contemporary because even though it's over a hundred years old, it speaks to that part of human nature that will never change, a selfishness we can't really help and an absurdity in all of modern life.

The only thing I can compare this to is the famous PG Wodehouse series with Wooster and Jeeves. It is the same genre of humor, takes place in early 20th century England, and is very understated and/or silly humor. But the humor in this book is so dated and the story so dull that this is barely amusing, and after waiting through an hour or more of listening for something entertaining to happen I gave up. I can't think of anyone I know who would find this book appealing.

A story of three British friends who go on a round-trip holiday from London to Oxford. Funny and endearing, old-fashioned English humor.