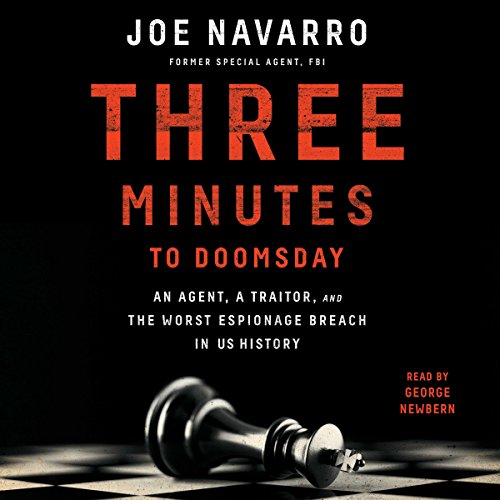 An intense cat-and-mouse game played between two brilliant men in the last days of the Cold War, this shocking insider's story shows how a massive giveaway of secret war plans and nuclear secrets threatened America with annihilation.

In 1988 Joe Navarro, one of the youngest agents ever hired by the FBI, was dividing his time between SWAT assignments, flying air reconnaissance, and working counterintelligence. But his real expertise was "reading" body language. He possessed an uncanny ability to glean the thoughts of those he interrogated.

So it was that, on a routine assignment to interview a "person of interest" - a former American soldier named Rod Ramsay - Navarro noticed his interviewee's hand trembling slightly when he was asked about another soldier who had recently been arrested in Germany on suspicion of espionage. That thin lead was enough for the FBI agent to insist to his bosses that an investigation be opened.

What followed is unique in the annals of espionage detection - a two-year-long battle of wits. The dueling antagonists: an FBI agent who couldn't overtly tip to his target that he suspected him of wrongdoing lest he clam up, and a traitor whose weakness was the enjoyment he derived from sparring with his inquisitor. Navarro's job was made even more difficult by his adversary's brilliance: not only did Ramsay possess an authentic photographic memory as well as the second highest IQ ever recorded by the US Army, he was bored by people who couldn't match his erudition. To ensure that the information flow would continue, Navarro had to pre-choreograph every interview, becoming a chess master plotting 20 moves in advance.

And the backdrop to this mental tug of war was the dissolution of the Soviet Union and the very real possibility that its leaders, in a last bid to alter the course of history, might launch a devastating attack. If they did, they would have Ramsay to thank, because as Navarro would learn over the course of 42 mind-bending interviews, Ramsay had, by his stunning intelligence giveaways, handed the Soviets the ability to utterly destroy the US.

The story of a determined hero who pushed himself to jaw-dropping levels of exhaustion and who rallied his team to expose undreamed of vulnerabilities in America's defense, Three Minutes to Doomsday will leave the listener with disturbing thoughts of the risks the country takes even today with its most protected national secrets.

The best of Clancy with the best of Law &amp; Order

If you could sum up Three Minutes to Doomsday in three words, what would they be?

Everyone is human. Joe isn't super man. He shows his tricks. He falls flat occasionally e.g. running into the occasional brickwall by WFO, HQ, DOJ. The encounters with the office manager are priceless. Building rapport with his partners, specially She-Moody, is exceptionally well written.

Even the bad guy emerges as a human being, not a caricature. He committed treason. But you see how it happens - not as an excuse, but as an explanation.

I've read Joe's body language book before (remembered the abrazzo (?)) example, and that fits in neatly with the overall story. You can see him arranging the furniture, offering a soda at the right moment, directing him to the restroom with a sharp gesture... and arguing with the office manager as to why hauling the guy into the Tampa Field Office with its available conference rooms is a terrible idea.

At the end, when the story wraps up you sense why Joe couldn't celebrate the arrest, and why he was at his physical and mental limit. The moments with his family are tender, and a reminder of what he's sacrificing to the case.

Have you listened to any of George Newbern’s other performances before? How does this one compare?

Joe stated that his Mom reads the reviews. Mrs. Navarro, this review was written for you. Read Joe's book twice. Once for the story. The second time to see how he did everything. You have a lot to be proud of. God bless.

Solid book that should be a movie

Stop wasting your time reading my review, buy it.
I'm an avid reader of about 4 books a week. True stories only in this genre. This tops them. A good solid read that never lost my attention.

I had no idea.

This is a very interesting story. It's amazing that there was a security breach this large and I've never heard anything about it.

This story was mind blowing! I love a good spy story but the fact that Joe's story was true and he tracked and captured this traitor in the 1980's makes this bone chilling. Hearing such an espionage tale and how deeply compromised our nation was in the late 1980's and early 1990's by the two spies talked about by Joe in his book, it scares me to think about others that may not get caught. I am glad to hear and want to thank Joe for his heroic efforts to not give in to the pressures and give up when most would have. His persistance possibly literally saved the world but definitely literally saved the entire United States and NATO nations from nuclear disaster. I DO hope we have solved the nuclear authenticator issue. We will never know if they did or didn't unless we get or have top secret clearance. If you are lost by my review, I suggest buying and listening to this audiobook. If you like a great back and forth police interview drama story. This is it! It has a good amount of suspense in it too. I could not believe all the different U.S. agencies and foreign governments and their special agencies that were getting "involved" making Joe's work all that more challenging. Check it out, you'll be glad you did! #Espionage #LawEnforcementDrama #GlobalSetting #Suspenseful #NuclearThreat #TagsGiving #Sweepstakes

The Story Really Grows On You

In the first few minutes of listening, you think, "man, this narrator is really bland, it must me a boring story." Let me tell you, that although the narration is read like a play, you begin to realize that if it had been read more dramatically, you would have missed the real core of the story being told. This was a calculating story that took place over many years and the insights that were laid out were truly chilling in a real, "oh hell no" type of way. Congratulations to agent Navarro for a great story that really got you feeling for the people involved, and a bow to the narrator for not ruining it by trying to tell a non-fiction account as a fictional, action-packed thriller.

Well worth your time, a story to be shared

Agents like Joe Navarro and their families make sacrifices that few of us will ever know. This is the story of an American hero, a Cuban immigrant, and that of a lost soul, an American traitor and criminal. The good guys win in the end, but not without monumental consequences with the security of the western world at stake. It also paints the reality of bureaucracy and how the highest escelons of government are driven by individuals, rarely the right thing and mostly just self interest.

The narrator does an excellent job making the reader a part of the story. For any Patriots and those who have served will experience many emotions upon hearing (or reading) the story.

Excellent on all accounts, and well worth your time.

great book. a little too much towards the end on how Everyone against him and his investigation

The storyline sounds much more gripping than it really was. If someone gives it to you and you have lots of time to listen it is worth a go. Does not too the list for books I tell friends that they must read or hear.

Changes the way you lie

The tale was spellbinding. And scary for what it says about our world. Also learned a lot of body language signals.