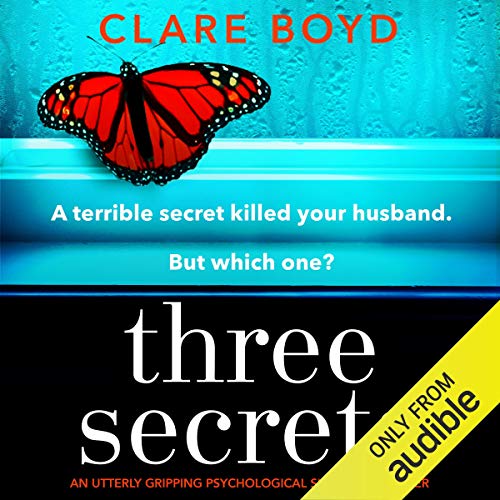 Written by: Clare Boyd
Narrated by: Jane McDowell
Try for $0.00

A terrible secret killed your husband.... But which one?

Robert kisses his wife on the head before heading out to the shop for more wine; he walks up the hill, takes a left across the footbridge, and jumps to his death on the busy motorway below.

Two years later, Francesca and her young daughter are leaving London for a fresh start. Money is tight, and Robert’s mother has found them a little cottage in her village. Francesca is grateful for the help, but why does Robert’s mother want to keep them so close? Does she know about what Francesca did in the hour before Robert’s death?

Soon Francesca begins to suspect there was more to her husband’s death than she realised, that there might be even darker secrets hiding in his past than her own....

The closer she gets to uncovering the truth, the more she asks: Is her own life in danger now, too?

If you couldn’t put down The Girl on the Train or The Couple Next Door, then you will absolutely love this gripping and twisty psychological thriller.

What listeners say about Three Secrets

This was an odd book. The story is more of a slow mystery than suspense, certainly more family drama than crime thriller, so be aware of that going in. The premise revolves around Francesca, whose husband, Robert, comes from a very screwed-up, wealthy and small-town dominating family; Robert has recently killed himself leaving her with four-year-old Alice and a new mandate to navigate, alone, the strange, tense and often cringe inducing relations with her in-laws. The other POVs are John, Robert's brother. Poor John is a really nice guy in a really bad marriage, so there is that plotline; then there is the historical POV told by Francesca in the third person describing her relationship with Robert and how she got to know his brother and parents in the process. The 'secrets' angle doesn't become truly clear until close to the end, and until then the vacuousness was frustrating, I waited impatiently through 3/4 of the story for something to happen. The best parts of this novel involved John and his struggles to balance his children's well being and safety with his own issues in his marriage, and try to come to grips with his abusive upbringing. Much of the story was otherwise, unfortunately, not very interesting to me.
The book definitely gets five stars for an excellent performance by Jane McDowell. I loved Ms. Boyd's other book, Little Liar, so I am still a fan; I think Three Secrets just didn't really do it for me.

This is a very good book!!!!!! Buy it and tell everyone you can Clare Boyd has yet wrote another awesome tale....

Multi layered and complex with lots of twists. Character development was done really well which can be challenging with so many secondary characters important to the story. Just enough angst and although implied I was so appreciative that the author was not repetitive and redundant in what they were all struggling with. Great ending!

One of the the best thrillers I have read in years! Loved the format, characters, everything about it! Great author!

This is easily the best book I've read all year. Superbly written, and artfully, nail-bitingly narrated. I am amazed at how no word or sentence was wasted. Finely tuned. A++++

THIS BOOK IS BILLED AS A "GRIPPING" NOVEL OF SUSPENSE.IN MY VIEW,AND BASED ON LISTENING TO THE FIRST TWO HOURS ,IT IS ANYTHING BUT.THANKS TO AUDIBLE'S RETURN POLICY I'LL GET ANOTHER BOOK FROM A DIFFERENT AUTHOR!