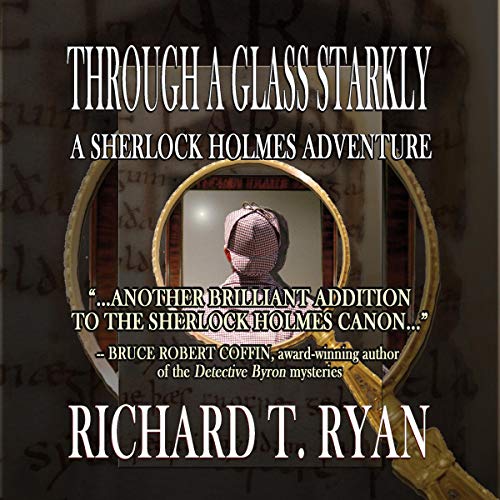 Through a Glass Starkly

After surviving an attempt on his life in Paris, Sherlock Holmes returns to London, where the great detective is almost immediately enlisted by his brother to secure the safety of the delegates at a top-secret peace conference. With Europe a veritable powder keg in the years before World War I, Holmes understands any misstep on his part could prove fatal and possibly plunge the continent into war.

However, after pledging to do his utmost for "King and Country", Holmes suddenly finds himself overwhelmed by an onslaught of cases. An old friend requests his assistance in recovering a priceless manuscript which has gone missing from the British Museum. Accused of accepting bribes from a smuggling ring, Inspector Lestrade, who has been suspended from Scotland Yard, turns to Holmes for help. Add in a beautiful newlywed who claims her husband is trying to murder her, and it is easy to see why Watson compares the tasks confronting his friend to the Labours of Hercules.

From a secret pied-à-terre in the City of Lights, to the Rare Book Room in the British Museum, to the Whispering Gallery in St. Paul's Cathedral, to the waterfront along the Thames, Holmes and Watson find themselves on the trail of an elusive quarry for whom murder is merely another move in an elaborate game of cat and mouse.

What listeners say about Through a Glass Starkly

Top-shelf in all respects

This is an exciting and very creative pastiche that stands alone among many modern attempts to keep Sherlock Holmes alive. The story is fantastic and the narration is brilliant. I highly recommend!

This Sherlock pastiche fills the gap when wanting more Holmes stories. It has an engaging set of mysteries and ticks all the classic Sherlock boxes, and then some….

Another great story by this author!

A great story about international intrigue on the eve of the Great War. Holmes is brought into the mystery by his brother to secure a secret meeting that will be hold in the hopes of avoiding the war that everybody sees coming. The plot is complex and truly engaging, although I was a bit disappointed that I see the trick with all the cases even before than Holmes :P

The telling is really well done, with the plethora of details that is usual in Mr Ryan books and that I enjoy so much :D I loved to see how Lestrade's case was truly important to Holmes, not just another problem to solve. And Wiggings all grown up! *laughs* Yeah, I don't think this Wiggins would be willing to be part of the Yard :P

Having Mycroft vouching for both, Watson and Lestrade's trustworthiness was also lovely. About time, I'd say! *laughs*

Luke Barton's narration was really great and a good part of my enjoyment.

If you want a good, traditional Holmes and Watson story, this is for you :)

On par with Sherlock Holmes!

Sometimes you wonder, with regards to newer written and published Sherlock Holmes mysteries, if the book can live up to what it means to be a Sherlock Holmes mystery. Let's face it, it is a hard boot to step into. But this has been a joy to listen to and lives up to the role it wants to play. Highly Recommend it!

this book was listed among the humorous books so I bought it hoping for something along the lines of Warlock Holmes or Inspector Hobbs. but it is the usual Sherlock Holmes' style knockoff.

if you want humor I recommend the books that I mentioned. if you just want Sherlock Holmes reimagined, go ahead.