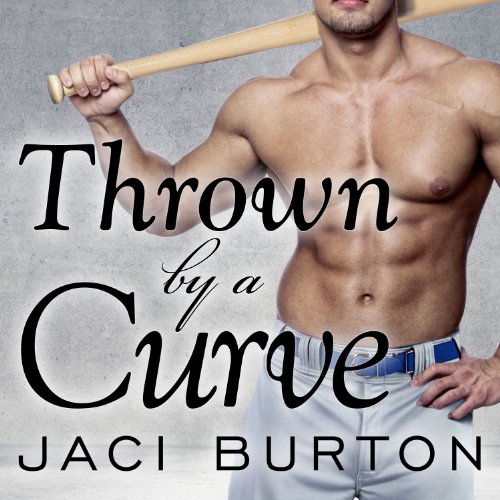 Thrown by a Curve

Alicia Riley considers her job as a sports therapist for the St. Louis Rivers baseball team is a home run - until she becomes the primary therapist for star pitcher Garrett Scott. Out of the lineup with an injury, he's short-tempered, hard to handle, and every solid inch a man. Right now, the only demand he's making on Alicia is that she get him ready to pitch in time for opening day. Except the sexual chemistry between them is so charged, Alicia is tempted to oblige Garrett just about anything. But both their careers are at stake - one bad move and it's game over for both of them. Garrett also feels the hot sparks between them, and the way he figures it, what better therapy is there than sex? Now all he has to do is convince the woman with the power to make the call.

"Longtime fans will be excited to meet characters destined to get their own stories." ( RT Book Reviews)

What listeners say about Thrown by a Curve

I love me some men from the Play by Play Series!

Thrown by a Curve is the fifth book of Play-by-Play series by Jaci Burton.  This book is like the others in the series which always ends with a delicious HEA. A romance with steamy scenes and likeable characters. This story continues with the Riley family and focuses on Alicia "Gavin's cousin" and Garrett "hot baseball player". Alicia Riley is a physical therapist who is assigned to hot shot ball player Garrett Scott's shoulder recovery. Garrett is the typical star athlete... arrogant, confident, and extreme sexiness.This story was a pretty straight forward romance. There wasn't very much drama or conflict. I loved the pace the relationship took to progress. It was a slow gradually build from friendship to something more. I could still feel the chemistry between Alicia and Garrett from the very beginning. In fact, there were lots of sexual innuendos and flirtatious banter between them. The sex is postponed while the author focuses a lot on building the romance & chemistry between Garrett and Alicia. I will rate the book 3 stars, simply because it was good, fast and a easy listen. However, it was missing the typical intensity found in the other previous 4 books in the series. Keep in mind, it wasn't a bad book just not my favorite. I definitely look forward to listening to book 6 soon.

Until the last 10 minute, Thrown by a Curve was a cute if predictable romance between baseball pitcher Garrett and PT therapist Alicia.

Unexpectedly, Garrett hit Alicia right after declaring his undying love and unexpectedly Alicia accepted the physical abuse as "sexy & exciting". What crap! No man would deliberating hurt a woman he likes or respects. And Alicia was not written as a weak, pathetic bimbo who would let a man degrade her.

For most of the story, Alicia was helping Garrett heal from a painful injury. After suffering for months, it didn't make sense that Garrett would inflict pain & humiliation on the person who helped him get better. And Alicia, as a medical professional, would understand the dangers of being with an abusive man.

I find it disturbing when sexual violence is presented as normal in a loving relationship, and almost always the woman is the one getting hurt.

Would you try another book from Jaci Burton and/or Lucy Malone?

Would you be willing to try another one of Lucy Malone’s performances?

Disappointment, I usually like Jaci 's stories really do not care for the narrator.

Would you listen to Thrown by a Curve again? Why?

she id a great job

Thrown By A Curve

I am loving this series! Garrett Scott is the injured pitcher and not recovering as quickly as anyone thought he would, especially him and when Alicia Riley spoke up she captivated him. She is on the sports medicine team and he wants her for his main therapist. These two have chemistry off the charts and once they figure out their boundaries, or no boundaries, his recovery starts to take shape. Will they be able to keep it all together to get him back on the mound in time for the season?

Loved and couldn’t put down

I liked that this book has an epilogue - it didn’t have an abrupt ending.

A similar book to the rest of the series. Interesting characters. A basic but satisfying story. The voice acting was okay.

about two rational adults with real relationship issues and doubts.
There wasn’t big explosive angsty problems, no jealous former lovers or intrusive family members.
This was a refreshing read with some hot sex and characters from the first few books making appearances.
As before, the narrator was good with the female roles; each woman having a distinctive sound but she needs to work on her male voices. When the story describes the H with a deep voice I expect to hear that. Unfortunately that wasn’t the case.
Liked the story though.

I love how Garret went to bat for their relationship and Alisha lt him be the man he needed to be. Narrator was spot on and kept me entertained. Well worth the credit. Can't wait for the next.

Would you try another book from Jaci Burton and/or Lucy Malone?

I'll definitely read another novel by Jaci Burton cause I really enjoy the series. This one lacked a bit in the emotional aspect for the main characters, but it was still an enjoyable read. Lucy Malone on the hand turned me off at the beginning of the novel. I do not like her voice. She sounds constipated or something. As I continued to listen I became used to her voice, but it distracted me quite often. I'm going to continue the series so I guess I have to put up with her voice. Each time I start a new novel I've forgotten about her voice and it turns me off =(

I would add more emotion to the couples relationship. Also make the ending a bit more complicated and not so easily fixed.

Her voice sounded like she was constipated and it was very distracting and annoying. I became accustomed to it as I continued the novel, but I would've preferred a different narrator.

Could you see Thrown by a Curve being made into a movie or a TV series? Who should the stars be?

I would prefer The Perfect Play, Changing the Game or Taking a Shot to be made for a movie or TV series. The main characters with the plots would be good.