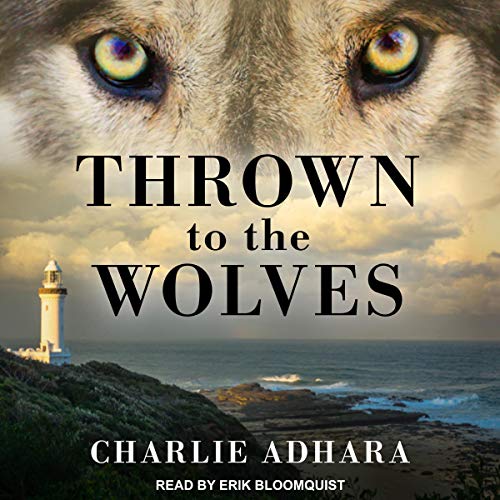 Thrown to the Wolves

Written by: Charlie Adhara
Narrated by: Erik Bloomquist
Try for $0.00

Agent Cooper Dayton is going to meet his boyfriend's werewolf family. Unarmed. On their turf.

And he's bringing his cat.

When Agent Cooper Dayton agreed to attend the funeral for Oliver Park's grandfather, he didn't know what he was getting into. Turns out, the deceased was the alpha of the most powerful werewolf pack on the eastern seaboard. And his death is highly suspicious. Regardless, Cooper is determined to love and support Park the way Park has been there for him.

But Park left him woefully unprepared for the wolf pack politics and etiquette. Rival packs? A seating order at the dinner table? A mysterious figure named the Shepherd? The worst is that Park didn't tell his family one key thing about Cooper. Cooper feels two steps behind, and reticent Park is no help.

There are plenty of pack members eager to open up about Park and why Cooper is wrong for him. Their stories make Cooper wonder if he's holding Park back. But there's no time to get into it...as lethal tranquilizer darts start to fly, Cooper needs to solve the mystery of the alpha's death and fight for the man he loves - all before someone else dies.

What listeners say about Thrown to the Wolves

At this point I have gotten use to the narration. It's not not good, but I've accepted it because I really like the story.

I think there's real growth in Cooper since the last book. In the second book Cooper was the one being making bad decisions, hiding things and getting them into trouble. This book it's Oliver, who doesn't explain much about wolf culture/society, and Cooper has to fumble his way through. But Cooper handled it, by learning from mistakes in the second book. And I love how things turned out between them.

I also really love the mysteries in these books, this one was great!

Still Way Too Many Secrets

This book really made me frustrated. For 3/4 of the novel I despised Oliver, and couldn't understand why Cooper wouldn't just hire a car and get out of there. The secrets, the lies... They'd been together for months, and yet for some reason, Park couldn't at least warn Cooper that there might be some tension when meeting his family? Perhaps tell him that there were traditions regarding greetings and table settings? Everybody gives warnings to their SO about the first meeting of their family, and it infuriated me that Oliver didn't respect Cooper enough to do that.

Every intimate scene felt tainted with deceit, and filled with Park's desperation to keep Cooper happy while also avoiding any serious discussions. And that's another thing! Why don't our heroes have many actual conversations together? They seem to talk to other people more than they do each other, which isn't a trait I look for in a romance (even a romantic suspense) novel.

There were threads of the story left un-concluded by the end of the novel, even though it was clearly the author's intention to do so. For example, what was Park and Ely talking about so intimately? That part of the story was completely brushed-over, aside to say that he was there delivering some information (I won't spoil it here). So, why the secrecy, the intimacy of the discussion?

The end, while satisfactory, did not make up for how awful Oliver behaved throughout the novel. I'll read the next one, but there had better be more honesty between these guys, or I'll call their relationship doomed.

Again, the narrator was horrible. Very robotic. If you (unlike me) have the time to actually sit and read the novels, I'd do that instead of listening to them, because this guy and his lack of inflection just makes me agitated.

*Edit: Another thing that bothered me was the lack of detail when it came to the weather. Nova Scotia, Canada in the winter is very cold, and while the wolves might not have felt the need to bundle up, Cooper would have required a winter coat, gloves, scarf, and toque, not to mention proper footwear. The dampness of his pant cuffs was never mentioned, either, even though after walking through the snow, he would have been cold and wet. Every time he stepped out of doors, and the well-known punch-to-the-face frigidity of deep winter in certain parts of Canada wasn't mentioned, I became even more irritated.

This is a frequent reread for me. While this is I think my least favorite book in the series, I still love it. The manipulation and just overall vileness that is the Park pack in the beginning makes me insanely frustrated, however, the amount of growth the entire pack shows is very nice to see.

Cooper and Oliver are among my top favorite couples ever. They truly love each other and are willing to do anything to ensure the others happiness.

I am really loving this series. It’s well written and has real character development. And the narration isn’t completely terrible but for some reason the narrator seems to only really connect to one of the MCs. The other’s tone is always off and I often find it hard to distinguish who is talking.

Well if I thought there was drama meeting Cooper's family that was nothing compared to the drama of meeting Oliver's family! Cooper isn't sure what to expect and the surprises just keep coming while visiting Oliver's family. Of course a huge part of that is because Oliver hasn't told Cooper anything and really given him no idea what to expect nor any help in dealing with his family. Apparently he hasn't told his family much about Cooper either. There are few twists and turns and surprises along the way and some growing between Cooper and Oliver. I wanted to smack Oliver a few times along the way when he let his fear of Cooper accepting him get in the way of their relationship. At times during this book the couple really felt like they were on shaky ground and had me wondering how/if they would work it all out. Throw in a murder investigation and all the secrets and it made for an exciting book. Looking forward to the next book!

The narration for this one is very good and the voices for the characters fit and were distinctive. It kept me engaged and has me wanting to listen to the next book versus reading it.

On this journey, Cooper gets to meet Oliver's family but Oliver forgot to share just one little tid-bit of information, which places Cooper in a precarious position, to say the least. Learning more about Oliver was interesting and adds more depth to the character...explaining a few things. Tie that in with another mystery to be solved and another edition to a wonderful tale written by Adhara and expertly narrated by Bloomquist. Excellent story!

Romance continues to grow between Park and Cooper. This time Park introduces his family pack to hear s human lover with murder and mayhem stirring things up.

Something different is always good!

Narrator Erik Bloomquist mastered the pacing and easily carried me through the many layers of this story. I digested hungrily all three books in this series.

The mystery and suspense was gripping and held my attention. I enjoyed the yummy sexy times, they were original and very entertaining. I had quite a few laughs as well.

I definitely recommend this series. It has some originality to it, which I wasn't able to predict.

love this series so much

I hope there are more books, but it wrapped up nice big not. Love these. Would absolutely buy more by the author or narrator. this store is just perfect. I've listened again and again already.

I n this series, I get a little lost at times, narrator a bit monotonous.

This series has been a lot of fun to read so far. Please keep writing!