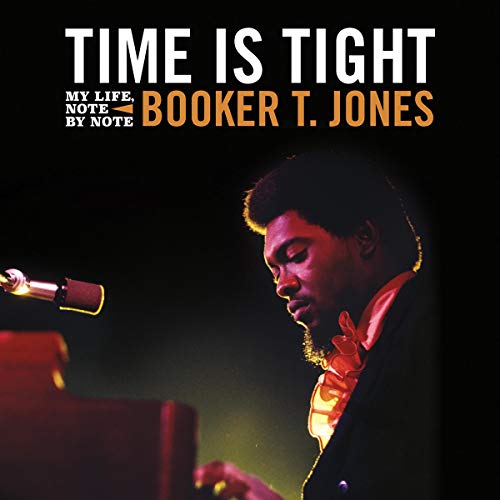 The long-awaited memoir of Booker T. Jones, leader of the famed Stax Records house band, architect of the Memphis soul sound, and one of the most legendary figures in music.

From Booker T. Jones's earliest years in segregated Memphis, music was the driving force in his life. While he worked paper routes and played gigs in local nightclubs to pay for lessons and support his family, Jones, on the side, was also recording sessions in what became the famous Stax Studios - all while still in high school. Not long after, he would form the genre-defining group Booker T. and the MGs, whose recordings went on to sell millions of copies, win a place in Rolling Stone's list of top 500 songs of all time, and help forge collaborations with some of the era's most influential artists, including Otis Redding, Wilson Pickett, and Sam & Dave.

Nearly five decades later, Jones's influence continues to help define the music industry, but only now is he ready to tell his remarkable life story. Time is Tight is the deeply moving account of how Jones balanced the brutality of the segregationist South with the loving support of his family and community, all while transforming a burgeoning studio into a musical mecca.

Culminating with a definitive account into the inner workings of the Stax label, as well as a fascinating portrait of working with many of the era's most legendary performers - Bob Dylan, Willie Nelson, and Tom Jones, among them-this extraordinary memoir promises to become a landmark moment in the history of Southern Soul.

"I have come to view Booker T and the MGs (the Mixed Group) as one of the backbones of American popular music, and if you listen to how Booker T. Jones works that Hammond B3 organ on those classic songs, you realize he is playing his life, note for note. That's how it is in his memoir, Time Is Tight. With every page, he strikes a heartfelt chord as he candidly reveals his life before and during his years at Stax Records, an era of racism and segregation that defined the city of Memphis, Tennessee and America. This book brings to light the honesty, grit, and integrity he displayed in his musical brilliance for more than six decades, a soundtrack of pure genius that transcends the human soul. I dare you to put this book down once you start reading it." (Al Bell, former owner Stax Records, former President of The Motown Records Group)

"Time Is Tight is a whirlwind tour through Booker's incredible journey from his humble beginnings in Memphis through his tenure backing up the likes of Otis Redding, Sam and Dave, Albert King and Carla Thomas to his blossoming as an acclaimed producer and songwriter. Told with heart and soul and interspersed with loving memories of his wonderful family and talented cohorts. The story is also rife with the turbulent times he has lived through from the King assassination, the fall of Stax and Al Jackson's murder. Through it all, Booker narrates with his intelligence and wit as we travel back and forth through these amazing life and times. Absolutely one of the most engaging and engrossing memoirs I have ever read." (Patterson Hood, writer, musician, and member of Drive by Truckers)

"The contributions by Booker T. Jones to American Popular Music are immeasurable. In Time is Tight, Booker digs deep into his soul, revealing much about the extraordinary music he has made over nearly six decades with artists as diverse as Otis Redding, Sam and Dave, Bill Withers, Bob Dylan, Neil Young, Willie Nelson and, of course, Booker T. and the MG's. In between stories of musical greatness, the readers learns much about Booker's personal life and, in the process, the depth of his humanity. Intelligent and articulate to a fault, Time is Tight is one of the finest autobiographies that I have ever read." (Rob Bowman)

This Autiobiography of Booker T Jones is a treasure to hear on Audible. Booker's spoken voice, not unsurprisingly, has a lilting musicality to it. With that, the opening bars played at each chapter start take us on a whirling journey through Booker T's growing up and adult life. Though it skips back and forth in time, such is the way people think and feel, especially artists. I highly recommend this book and it's rewarding music, history and humanity.

If looking for an entertaining and uplifting read for Black History Month or anytime really I recommend this new autobiography from the Memphis music Legend Booker T Jones. Like his music his writing is eloquent and tight. Interesting stories (or Notes as he puts it) of neighborhood life in Memphis in the 50’s & 60’s, lots of time with family on the porch and at Mt Olive Church, throwing the Press Scimitar, and playing baseball & music. Then one day a friend slipped him out early from Booker T Washington HS and took him to a recording studio on McClemore Ave. Soon he was the leader of the House band backing Otis Redding & Rufus Thomas. At age 17 along with the MGs he had the hit song Green Onions. Great stories about Stax, Duck Dunn, Cropper and the great Memphis drummer Al Jackson, college days at Indiana U, troublesome women, then he was off to a Malibu, California ranch. Although he has mostly lived in California and toured the world his roots remain Memphis. His musical influences range from classical to all of Americana. Entertaining stories of his times with Dylan, Santana, the Coolidge sisters, Willie Nelson, Stephen Stills (his fav rock guitarist), Bill Withers and many more. A rich life & talent that came from right here. (And not to be too much of a spoiler he finally finds the right woman and has one of those wonderful blended families)

I, like most on the planet, have enjoyed Mr. Jones’ music throughout the decades of his his playing, composing, arranging, and studio work. When I came across this title on Audible, I wanted to know more about the man behind the music, and this book delivered in eloquent and unexpected ways. It ranges across themes from music theory to pop history to deeply expressed contemplations on social injustice to personal challenges and, ultimately, redemptions. The author took a creative risk in delivering a chronically disjunct narrative rather than a linear one, and that approach suits the material perfectly. Likewise the the tone of the book - and the narration - reflects an honest, sensitive, and spiritual confidence. I’m sure I’ve never paused an audiobook as much as I did this one, because I frequently jumped over to iTunes to relisten, or hear for the first time, to hear the songs discussed. I don’t think I’ve ever reviewed an audiobook before but I couldn’t help but take time to heap praise and gratitude on Time is Tight. Finally, I don’t think I’ve ever bought a print version of a book I just heard from beginning to end, but I ordered this one on Amazon, so that I can revisit it when I find myself in need a bit of an uplift ... so thanks!

Booker T. was so much more than the name sake for a great band. His work as a writer, arranger, and producer has long been recognized by those in the recording industry. He played on so many of the great songs that came out of Stax in the 60’s and early 70’s.

I appreciate that his story was written by him and not a ghost writer. His narration provides the authenticity and comfort of that made me feel like I was having an extended conversation with the man.

I am sincerely thankful that he put forth the time and effort to share his story with us in his words and in his voice.