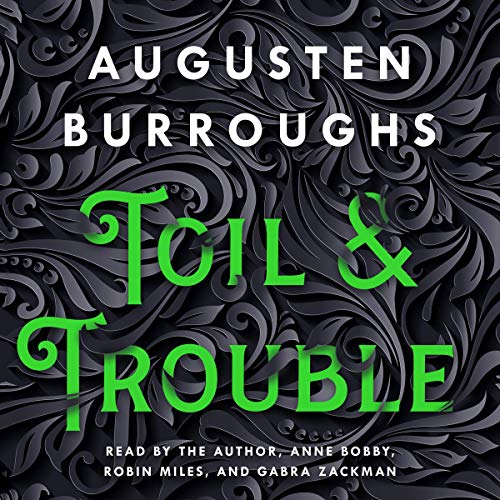 "...on top of everything else, the audiobook features a multi-textural and atmospheric full-cast performance.... This is a wild, spookily engaging take on a memoir from an iconic writer." (Paste)

From the number-one New York Times best-selling author comes another stunning memoir that is tender, touching...and just a little spooky.

"Here’s a partial list of things I don’t believe in: God. The Devil. Heaven. Hell. Bigfoot. Ancient aliens. Past lives. Vampires. Zombies. Homeopathy. Bigfoot. Canola oil, because there's no such thing as a canola. Note that 'witches' and 'witchcraft' are absent from this list. When really they should be right there at the top. The thing is, I wouldn’t believe in them, and I would privately ridicule any idiot who did, except for one thing: I am a witch." (From Toil & Trouble)

For as long as Augusten Burroughs could remember, he knew things he shouldn't have known. He manifested things that shouldn't have come to pass. And he told exactly no one about this, save one person: his mother.

His mother reassured him that it was all perfectly normal, that he was descended from a long line of witches, going back to the days of the early American colonies. And that this family tree was filled with witches. It was a bond that he and his mother shared - until the day she left him in the care of her psychiatrist to be raised in his family (but that's a whole other story).

After that, Augusten was on his own. On his own to navigate the world of this tricky power; on his own to either use or misuse this gift.

From the hilarious to the terrifying, Toil & Trouble is a chronicle of one man's journey to understand himself, to reconcile the powers he can wield with things with which he is helpless. There are very few things that are coincidences, as you will learn in Toil & Trouble.

Ghosts are real, trees can want to kill you, beavers are the spawn of satan, houses are alive, and in the end, love is the most powerful magic of all.

"[Toil & Trouble] is fully brought to life in a complete and unabridged 'theatre of the mind' audio book experience by the narrative team of Augusten Burroughs, Anne Bobby, Robin Miles, and Gabra Zackman." (Midwest Book Review)

What listeners say about Toil & Trouble

Had the author read to me throughout a sad time . So glad to have found this .
I don’t feel gaslit anymore .

I used a credit yesterday to get the new Augusten Burroughs. I knew nothing about this memoir, it's one day old. But oh, My. God. I had to stop to go to work, but I will get right back to it on the commute home. The story is mesmerizing, and the author does a wonderful job bringing his story crackling to life. What I didn't expect is the way Burrough's mother plays a major role in this memoir. Five stars to the casting department --- because the voice of Burrough's mother is exquisite and droll --- those who've read RUNNING WITH SCISSORS won't be disappointed. But they will get a new angle on her. It's a fascinating journey through everyday events and supernatural ("natural") episodes. Interestingly enough, it's packed with witchy facts and ephemera, Most importantly, Toil and Trouble has a compelling and delightful story line, which is the author's madcap life and vibrant relationship with his husband.

If you don't believe in witchcraft, well. It hardly matters. The artistry is there and Burrough's exuberant humor and earnestness shines through, Do yourself a favor and get this one.

Wow. A crack in an old tree offends the author by its resemblance to an “old crone’s vagina” and its oversized wooden labia threaten to open up and suck Augusten into the slime flux contained within.

I’ve been entertained, enlightened, edified and educated, (OMG 5 E’s) but never shamed by a body part. Augusten, what a pu$$y hater you turned out to be!

I wanted to like this book and generally love Burroughs memoirs, but his narration of this is truly baffling. I’m not sure why he inserts so many pauses or makes everything sound like a question. It sounds like a child reading aloud to a parent. Hopefully in the future they hire a professional to read his work!

I love his books and wanted to enjoy this and just could not get beyond his narration. The cadence was just OFF, not conducive to story telling. Sorry, I couldn't even finish listening.

Awful narration...I’d say that the narrator, who was also the writer, should stick to writing, but really he should have stayed with whatever he did before writing. I don’t know if he has a problem reading for an audience, but his frequent pauses between words were so nonsensical I could barely follow any one sentence he read. It was almost as if he didn’t know what he had written or how he wanted his own story to flow.

I applaud that he banged out a whole book and got it published (something I’ve never been able to do) but this is a stinker! Yowza!

I’ve been with Audible for going on twenty years; this is only the third book I’ve returned. It’s the only one I’ve bothered to do a negative review for because I don’t want anyone else to have to suffer through this atrocity.

DO NOT WASTE A CREDIT ON THIS.

I'm a huge Burroughs fan and appreciated his latest installment. It ran a bit long and concerns itself with much more domesticity than previous books, given that he's married and living on a historic estate in rural-ish Connecticut with even more dogs to boot. Love his reveal on being a witch and can totally see that--with hindsight being 20/20--on his previous writing and philosophies about focus, achievement, and getting stuff done.

Long story short: I didn't think it was possible to put that much uptalk inflection on that many words in the same sentences and paragraphs, but leave it to Burroughs to be a savant at that. I was of the persuasion that people eventually grew out of uptalk, and here again, Burroughs proves an exception. Yep, totally going back to old-fashioned reading his books from here on out. I'll still always want more writing from him!

Also, this book delivers super poignant moments on his connection with his now deceased mother. I think he honors both the extreme difficulty of having a narcissist for a mom while still acknowledging the gifts within his overall experience. He doesn't divulge his forgiveness process, yet I do believe he did get to a real forgiveness without a convenient spiritual bypassing.

Sadly it seems that Augustan is wrapped up in the identity politics. What a bummer. I’ve always enjoyed his books but now he’s just pushing the same tired divisive narrative

I really enjoyed this audible book. Okay, once you get over the way Mr Burraughs speaks (sorry no offense), and you are actually listening to what is being said. I found this book really resonated with me. It also hit a lot of points that has happened within my own life. Its funny because I never do Memoirs of other peoples lives and yet, I did this one. Thank you Mr Burroughs for this book it was funny and inspirational and eye opening.

narrator is terrible, I can't even focus.

I don't even want to finish the book, the narrator is that bad. Sorry, truth.

Whoever convinced Mr Burroughs to speak at such a slow pace is at fault for this horror. This will inevitably irritate more people that me. I am going to to listen to the whole book because I truly enjoy the author's work but I am going to increase the speed on my mp3 player so as not to aggravate myself.

I increased the speed to 1.25 and was able to forget the annoying delivery and simply enjoy a wonderful book. So much that this author writes about is relatable. The way he percieves his experiences is however, hilarious.