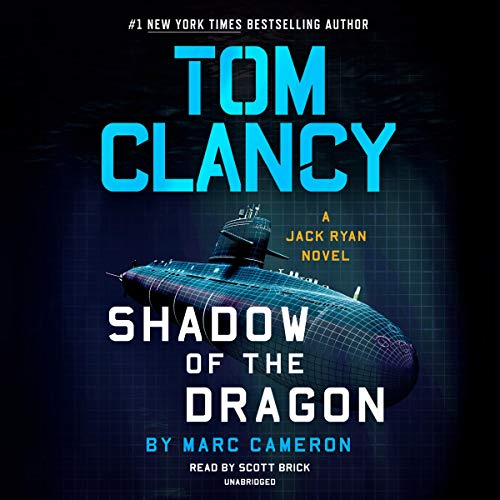 Tom Clancy Shadow of the Dragon

Written by: Marc Cameron
Narrated by: Scott Brick
Try for $0.00

A missing Chinese scientist, unexplained noises emanating from under the Arctic ice, and a possible mole in American intelligence are just some of the problems that plague President Jack Ryan in the latest entry in Tom Clancy's number-one New York Times best-selling series.

Aboard an icebreaker in the Arctic Ocean, a sonar operator hears an unusual noise coming from the ocean floor. She can't isolate it and chalks the event up to an anomaly in a newly installed system. Meanwhile, operatives with the Chinese Ministry of State Security are dealing with their own mystery - the disappearance of brilliant but eccentric scientist, Liu Wangshu. They're desperate to keep his crucial knowledge of aerospace and naval technology out of their rivals' hands.

Finding Liu is too great an opportunity for any intelligence service to pass up, but there's one more problem. A high-level Chinese mole, codenamed Surveyor, has managed to infiltrate American intelligence. President Jack Ryan has only one choice: Send John Clark and his Campus team deep into China to find an old graduate student of the professor's who may hold the key to his whereabouts. It's a dangerous gamble, but with John Clark holding the cards, Jack Ryan is all in.

What listeners say about Tom Clancy Shadow of the Dragon

Always look forward to a new Jack Ryan novel, but unfortunately very disappointed. Extremely short by Clancy standards. The plot is ok but not on par to other Clancy novels.
Scott Brick does a great job as always.

Good story, but a bit short.

It was good but not as good as some of the other books. Seemed rushed.

Cameron does honour to the Clark/Ryan legacy

In my opinion, the best Jack Ryan book written by Marc Cameron. Looking forward to reading the next instalment.

the story seems very much like hunt for Red October while thats a great story ... another like it is a little derivative.

So you turn off the TV and go read a book to get away from the non stop, 24/7 narrative of oppressed minorities and race this, and race that.

Let's see,,, Tom Clancy... this will be a fun, traditional adventure about undercover operations with an emphasis on military hardware and its capabilities. Negative Ghost Rider. 50 % of the book is about the struggles of an oppressed minority and in the other 50%, almost every time there is a new character the author has to go into GREAT detail about what race they are, and *of course*, if the new character is a minority they are brilliant, and outstanding in every way.

***I'm a minority*** BUT when I pick a Tom Clancy book, the last thing I want is for the book to be 50% pandering to the woke publishers. I guess that is what modern writers have to do in order to get published and pay the mortgage, but it really sucks for the reader.

Let's get the elephant out of the room. Robby Jackson was never President. He was killed on the campaign trail. Someone needs to tell your editors that they need to read the previous Clancy books. BUT I still loved it!

Marc Cameron brings something new. His characters seem more approachable with a smattering of witty repartee. He continues with the descriptive military information, but I'm loving how he is allowing the characters to develop. I hope to see more of Dr. Moon in other stories; she is a riot, but so smart! It's the little things like Cathy in a sweatshirt when Jack and Lisanne come to dinner (it's time for President Jack to have grandchildren). JP on discovering "the family business, and Gavin is always just the perfect tech guy. Thanks for this book and please post when the next will come our way!

p.s. Scott Brick was brilliant as per usual.

Awesome, as usual! I would even go so far as to say this is one of the best stories yet!

When I saw the release date for Shadow of the Dragon back in September, I immediately started re-reading/listening-to the Campus Novels in order, beginning with Teeth of the Tiger. There is an unmistakeable decline in the overall quality of the stories and writing that started approximately 4-6 books ago. I'm baffled at the amount of people who are giving this book 5's across the board. This was, quite literally, the absolute worst Clancy book I have ever had the misfortune of hearing. My advice would be to create a new audible account , get a free trial, and get this book with the free credit. It's not worth any amount of actual money.

I have been a Clancy fan since Red October. Since the death of Clancy, the novels haven't been the same.

For a "Jack Ryan " story it was terrible. I finally made the decision to return it.

The story is very convoluted and so in depth about pointless characters and lack of substance. Flow is very bad. I have read and listened to every Clancy Book since Red October.
Very disappointed.

This book was not what I expected from the Jack Ryan series. It was a drag.

Good political subject without being overly political - China has concentration camps, just like America. Cameron is not as good as Greaney, but a worthy read. The overall story was solid, not great. Though it really lacked Ryan and Ryan Jr.