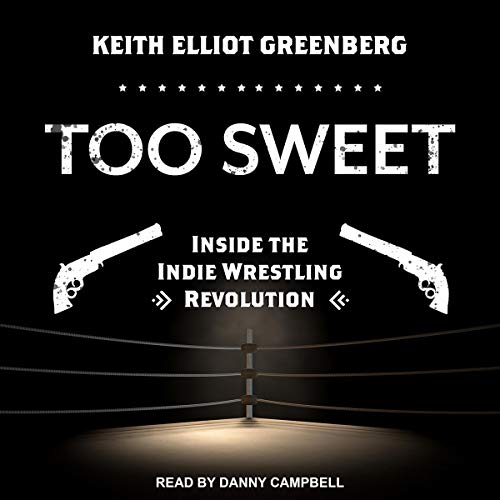 In 2017, after being told that no independent wrestling group could draw a crowd of more than 10,000, a group of wrestlers took up the challenge. For several years, these gladiators had been performing in front of rabid crowds and understood the hunger for wrestling that was different from the TV-slick product. In September 2018, they had the numbers to prove it: 11,263 fans filled the Sears Center Arena for the All In pay-per-view event, ushering in a new era. A year later, WWE had its first major head-to-head competitor in nearly two decades when All Elite Wrestling debuted on TNT.

Acclaimed wrestling historian Keith Elliot Greenberg's Too Sweet takes listeners back to the beginning, when a half century ago outlaw promotions challenged the established leagues, and guides us into the current era. He paints a vivid picture of promotions as diverse as New Japan, Ring of Honor, Revolution Pro, Progress, and Chikara, and the colorful figures who starred in each. This is both a dynamic snapshot and the ultimate history of a transformational time in professional wrestling.

What listeners say about Too Sweet

The narrator is constantly mispronouncing words. It really takes you out of it. The book itself is a bit all over the place. Just a bunch of random summaries of periods of more modern indy wrestling.

The book is well written and contains a wealth of historical data and fun anecdotes. Then there's the narrator. His voice and so forth are fine, but he mispronounces the names so many wrestlers, including Finn Balor, Bad Luck Fale, Kazuchika Okada, Freddie Blassie, Lou Thesz and Shayna Baszler. Less than minutes on You Tube would've fixed every one of them.

doesn't tell much you wouldn't know if you were even marginally interested in wrestling outside of WWE...
so just okay


Danny reads fine, but didn't bother to look up things like names which is a problem

The guy reading is hard to listen to, and continually gets basic well known names wrong, which is very irritating. But the book itself is fantastic.

Great for any wrestling fan

This book covers wrestling organizations from all over the world - such as CHIKARA, RevPro, CZW, AEW, NJPW, countless others - and gives in-depth history to the company history and important feuds. Narration isn't perfect (mispronounced names, mostly) but doesn't really detract from the quality of the book. Highly recommend for any wrestling fan.

as a thirty year wrestling fan I was intrigued and inspired by this book, I learned something's and found out about others. all in all this was a good book

The way the story is presented is a weakness as it reads like a newspaper column with little of the verve and personality of the participants. The narrator was totally wrong for a book on professional wrestling and sounded like he should reading crop reports on the radio in a very small market.

The beginning of a new golden age of Pro Wrestling!!!!

Absolutely great read if your a die hard wrestling fan as I am! I look forward to the next chapter that the author intends to write.