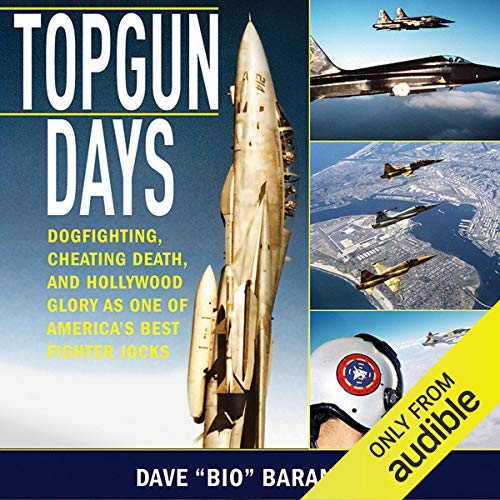 Topgun Days: Dogfighting, Cheating Death, and Hollywood Glory as One of America's Best Fighter Jocks is a focused description of one man’s exhaustive climb to the pinnacle of his career as fighter pilot. This autobiography by Dave Baranek will prove enjoyable to those generally interested in military life as well as those who wish to live vicariously through an expert fighter pilot. Baranek explains the patience and discipline required to ascend the fighter pilot career ladder. He segues into his life as role model for Hollywood’s glamorized version of topguns. Assigned to create action footage for the Tom Cruise vehicle Top Gun, Baranek himself briefly becomes a pop phenomenon. Baranek’s pride and sincerity can be heard in narrator Jeremy Arthur’s entertaining recital.

Dave Baranek (callsign "Bio") was one of 451 young men to receive his Wings of Gold in 1980 as a naval flight officer. Four years later, seasoned by intense training and deployments in the tense confrontations of the Cold War, he became the only one of that initial group to rise to become an instructor at the navy's elite Fighter Weapons School. As a Topgun instructor, Bio was responsible for teaching the navy's and Marine Corps' best fighter pilots how to be even better. He schooled them in the classroom and then went head-to-head with them in the skies.

Then, in August 1985, Bio was assigned to combine his day-to-day flight duties with participation in a Pentagon-blessed project to film action footage for a major Hollywood movie focusing on the lives, loves, heartbreaks, and triumphs of young fighter pilots: Top Gun. Bio soon found himself riding in limousines to attend gala premieres, and being singled out by giggling teenagers and awed schoolboys who recognized the name "Topgun" on his T-shirts. The audiobook ends with his reflections on his career as a skilled naval aviator and his enduring love of flight.

What listeners say about Topgun Days

Enjoyable book on life in TOPGUN

I enjoyed this book on life as a naval flight officer. Easy listen. Entertaining stories.

I admit it, I’ve watch Top Gun the movie over and over. I love it. So when I had to a chance to read how it was put together I jumped at it. I had no reviews to help me (I really depend on reviews) so I felt a need to write a this review.

Top Gun the school according to Bio didn’t have a trophy given to the winner of the class. Tony Scott took some liberties with that one.

When I listen to a book some go by real fast, and that usually means to me it was riveting. This book flew supersonic by me and of course, I did stream the movie this weekend to check the credits and see exactly what Bio was talking about.

If you liked the movie this book is for you.

Great book that gives a ground level view of...

What it’s like during the Top Gun days as well as specifics from inside the cockpit that you’ve likely never learned anywhere else.

Anyone who loves aviation will surely enjoy this book. Bio has great stories and they are told masterfully. Godspeed

My only issues was the narrators lack of understanding of military jargon. He says "oceana" wrong the entire book, and just has a general lack of knowledge as to what some of the provided acronyms mean, which definitly broke the continuity of the story for me on more than a few occasions. Still a great story.

an average book, nothing exciting here that you probable didn't know already and if you didn't know it's not that all interesting

it was a very good book, pretty accurate, and fun. It brought back good memories, most of them accurate. I wish the narrator knew how to properly pronounce "Oceana", because that was quite an irritant, considering everybody in Virginia and in the Navy knows how to pronounce it properly LOL... aside from that glaring error, the narrator did a very suitable job, and the material was very, very good, definitely worth listening to!

An honest and thrilling look at a day in the life of a Naval aviator in Top Gun. Definite must read for any Military Aviation fan.