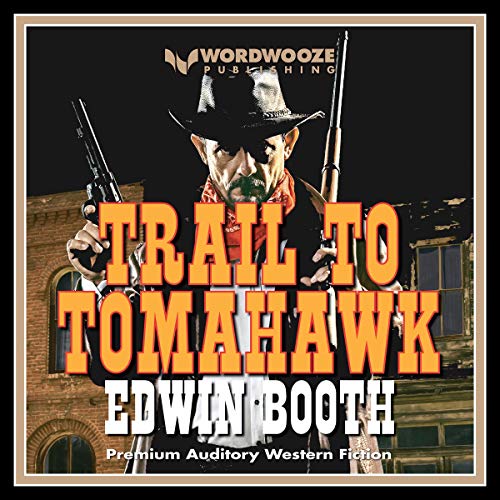 Written by: Edwin Booth
Narrated by: Harris Allgeier
Try for $0.00

His partner was death-branded by six bullets from a ghost gun.

It was Curt Traynor's birthday, and Curt was a young man who liked to celebrate the occasion with a drink and a friendly brawl. Curt had been working like a dog and his partner in the Tomahawk ranch, Frank Ballard, felt Curt had earned the right to blow off a little steam.

What worried Ballard was Del Hudspeth, who owned the Crazy K. Hudspeth wanted the Tomahawk and recently had been hiring men who seemed to have more experience with six-shooters than herding cows. But Ballard figured if they hit the local saloon for a few quick ones and headed back to the Tomahawk, he could avoid the Crazy K bunch and keep Curt shy of any trouble. But Ballard figured wrong.

Someone, probably from the Crazy K lured Curt outside and when Ballard went out to check on things that someone shot Curt six times from the darkness, making his birthday his death day as well. Worse, whoever pulled the trigger framed things to make it look like Ballard had fired the shots and murdered his own best friend.

Ballard shot back and when the sheriff arrived, Ballard was standing over Curt's body with the smoke still rising from his gun. Since Ballard inherited Curt's share of the Tomahawk, he had a good motive for the killing and most folks fingered him for the murderer. Unless Ballard acted fast he knew he would face a murder trial and a public hanging.

Somehow he had to escape and find the ghost gun that killed his partner and the man who had pulled the trigger. And even if he did, Ballard knew Hudspeth and the Crazy K riders would be waiting on the open plains to intercept him with loaded guns. For on a range where he could no longer tell friend from foe, Ballard's fight to save Tomahawk had become a total struggle for survival - for his life as well as Tomahawk ranch.

What listeners say about Trail to Tomahawk

A quick fast paced thrilling story set in the old west that captivates from start to finish. The world building and narration are on point. This is my first read/listen from this author and I was sucked in from the start...I look forward to more from this author