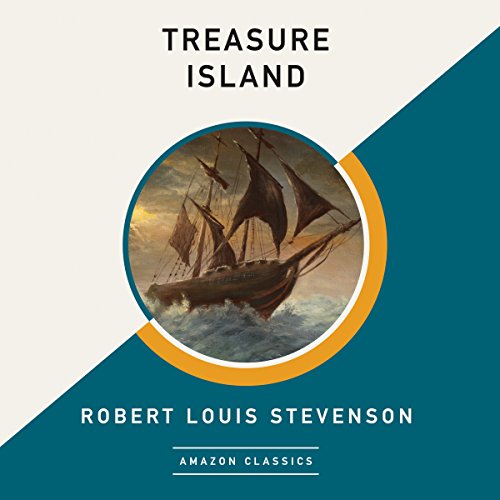 When young Jim Hawkins decides to follow a map to buried treasure, he must befriend or outsmart memorable characters such as pirate Long John Silver, captain Billy Bones, and island man Ben Gunn. Mutinous plans, mysterious deaths, and a tangle of double crosses keep Jim guessing all the way to the prize.

Inspired by real-life seafarers, Stevenson captures the adventurous spirit of the times and the imagination of readers, young and old alike.

There is a list entitled "100 books to read before you die".  Out of curiosity and the desire to expand myself intellectually I have been plugging my why through these books. Many of these books are a part of our life. Like the adventures of Winnie the Pooh and the entire collection of The Wizard of Oz. There are so many more, some fun and some daunting.

Treasures Island is one such book rightfully included I. this list. I am guessing that most of us are familiar with this story in one form or the other.

Fore me the original stories looses nothing over time. Captivating and thrilling and very likely unrealistic. Yet this story has captured many other minds and heart.

A for sure recommendation

A very well read version of this classic.

The reader has done a great job with easily recognizable natural sounding voices and good pacing and phrasing. As good as a movie if you close your eyes!

Amazing reading of a classic!

Amazing classic story, and very well prefermed. I have listened to it twice through and likely will again.

I was curious, being a classic and all.

I honestly didn’t enjoy this book but I was curious about it as I never read it in school and now I can say I know. The performance was the best part, but I didn’t care much for the plot.

An example of great narration

I really struggle with "classic" novels. Maybe it's the writing, or the way people used to speak back then, but I have always had trouble sticking to these classic stories that everyone should read.

Michael Page is probably my favourite all time narrator. There are more than a few audiobooks in my collection that I've purchased just because he is the narrator.

Although I can't say I really enjoyed this story all that much, what I can say is that his performance made this worth sticking it out to the very end.

A Classic brought to life

Michael Page gives a stunning performance and the characters of Treasure Island spring to life. Even though I read it many years ago and knew what would happen the story kept me enthralled and wanting to hear more.

these quiet evenings require old classic friends. they still spark my imagination and pass the time

Didn't live up to the great novel .

this adaptation was just not very entertaining the reader lact immensely the talent storytelling. I have listened two other versions of this wonderful story this one unfortunately does not make the grade

Many people were required to read this book in middle or high school. I say that they were much more lucky than I with the books I was required to read. I found the book enjoyable, looking forward to picking it up when I was forced to set it down due you other demands on my time. I think Michael Page performed admirably, it was easy to follow the characters by his voice and accents alone. Stevenson wrote a fantastic, believable tale or mystery and intreague that books of the same ilk today require more imagination to enjoy.

great reading but, in some parts he gets real loud when he reads slivers lines so be cautious if wearing headphones. lol

I was pulled right in. Love how the author betrayed the authenticity of the past. believable characters, realistic backgrounds, so I can actually smell the salt in the air the sea. What a great adventure for all.

My family and I couldn’t understand the reader. Wish we could return it. Cannot rate the story since we have no idea what was being said.

Wonderful Narration, and Robert Louis Stephenson writes in a style that I really like. After listening to this classic I immediately bought all the other Audible titles available from him.
Then I watched a Disney version of the movie, which couldn’t hold a candle to the book.

For Twelve Year Old Boys of all Ages

I had never read this classic and even though I'm a Grandma and though many descriptions said it was originally written with twelve year old boys on mind, I decided to listen anyway. I was not disappointed! If you don't listen because it's a classic, then listen for the heart stopping, never ending excitement. A few times I even gasped out loud (poor Jim in the apple barrel)! Or listen for the talented performance of the voice actor. His portrayal of the pirates especially-brilliant! Whatever your reason, you'll love it.

A theater in the mind . well dune. all of the caricatures have different voices. this is what being read to menes!!!