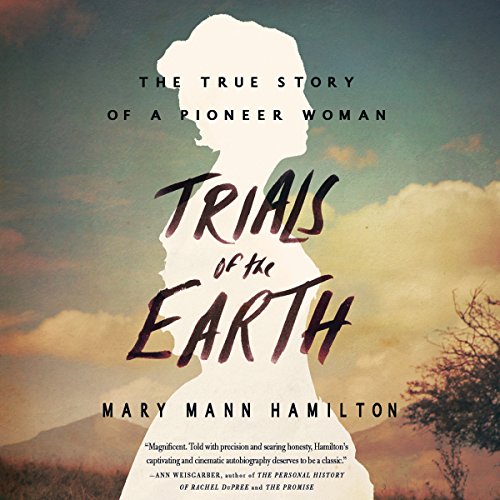 Trials of the Earth

The Powerful, Only Known First-Person Account of One Woman's Struggles and Triumphs Taming the Mississippi Delta

Near the end of her life, Mary Mann Hamilton (1866-c.1936) was encouraged to record her experiences as a female pioneer. The result is the only known firsthand account of a remarkable woman thrust into the center of taming the American South - surviving floods, tornadoes, and fires; facing bears, panthers, and snakes; managing a boardinghouse in Arkansas that was home to an eccentric group of settlers; and running a logging camp in Mississippi that blazed a trail for development in the Mississippi Delta. All this she tackled - and diligently wrote about in secrecy, in a diary that not even her family knew she kept - while caring for her children, several of whom didn't survive the perils of pioneer life. The extreme hard work and tragedy Hamilton faced are eclipsed only by her emotional and physical strength; her unwavering faith in her husband, Frank, a mysterious Englishman; and her tenacious sense of adventure.

An early draft of Trials of the Earth was submitted to a writers' competition sponsored by Little, Brown in 1933. It didn't win, and we almost lost the chance to bring this raw, vivid narrative to listeners. Eighty-three years later, in partnership with Mary Mann Hamilton's descendants, we're proud to share an irreplaceable piece of American history.

Conveyed in frank and expressive prose by a natural-born writer, and withheld for almost a lifetime, Trials of the Earth will resonate with listeners of history and fiction alike - an emotional testament to our ability to endure as well as the story of extraordinary love and the allure of pioneer life.

"A reminder of how punishing the physical struggle could be, and how unspeakably lonely a woman's life was when men were clearing the land." ( New York Times Book Review)
"To read Hamilton's autobiography is to experience an extraordinary life of courage and hardship.... Hamilton, a born storyteller, has written a rich, simple narrative; her personal strength is surpassed only by the strength of her writing abilities." ( Library Journal)

What listeners say about Trials of the Earth

So many people have commented on this woman’s incredible devotion to her husband but no one has commented on the fact that her husband was a self centered jerk. The book was slow and boring. I tried to listen to it several times and couldn’t get into it. By then it was too late to return it.

To get a glimpse into late 19th century/early 20th c. life, first hand, from someone with such a detailed memory and rich story, truly is a treasure. Ms. Creel does a wonderful job reading. She makes it very easy to listen to. I will miss this book now that it's over!

I had to laugh when I saw one reviewer’s comment of “nothing too fantastic” . . . oh, my goodness! Where have they been? They must have a heart of stone. I’ve never lost a child, either at birth or later from disease or accident. I’ve never cooked from daylight to dark for a multitude of workers without electricity or any conveniences. You absolutely cannot listen to this book and come away not saying, Wow! How very blessed I am to live in America now, right now! But for those that have gone before us, we would not be enjoying the blessings of the cushy life we have . . . air conditioning, light, vehicles, shopping centers, the internet, groceries that keep. . . Yet this tough as a pine knot pioneer woman survived, thrived, and was thankful . . . THANKFUL . . . the narration is top notch . . . the telling of it all is absolutely amazing, just plain truth, laid out for us. . . flooding, raising children, loving her husband, yet never truly understanding him, moving when he felt the need to move, and never really having a home. Trusting her six-year-old daughter to watch and care for the younger ones . . . and for you bored listeners who found that some of the tale was repetitive, well, just think how old and repetitive life had to be for Mary Mann Hamilton . . . I for one am very thankful that she was urged to write it all down . . . because this isn’t a fairy tale . . . or a fictional account . . . I hung on every word . . . I was there with her . . . thinking this could’ve been my great grandmother . . . and thank God my great grandmother and her mother and her mother had the grit and determination to persevere.

It’s a scope into the life of a family struggling to survive the harshness of early rural life in the American south, laced with several instances of racism, death, suffering, and happiness. Everything one would expect from that world. I struggled to finish it. The reading can get really annoying at times. Otherwise, it’s good storytelling. Would probably please most.

A fascinating story, just a little long, but filled with amazing history and harrowing, as well as delightful experiences. Ms. Benjamin-Creel's narration is excellent with each character's voice revealing of his or her nature, making each a believable person, and the story real.

Wow, this lady had stories to tell and sure knew how to tell them! The narration was the best match to story I've heard yet. Sometimes it's hard to tell whom should get the highest credit: the author or the narrator. This was one such example.

Wow, I feel pretty complicated about this book. I was enraptured from the moment it started until the very end. But. Okay.

On the one hand, it offers a fascinating, nuanced, and beautifully terse account of gender during the late 1800s. This is written only in the way that a first-hand account could be - no part of it feels contrived or fantastical. It has all the grit and soul of a Steinbeck novel without any of the stupid, ten-page long metaphors or boring flowery language. Like listening to a good campfire story, this makes a great audiobook.

On the other hand, unsurprisingly, race relations and characterizations get more and more unsettling in the second half of the book. I think it is good to be reminded right now in 2016 of the straightforward, overt racism that permeated society then - to see how far we have come and to reflect on just how much farther we need to go. Sociologically, it's interesting (for example, there are parallels or lines of continuity that be could be drawn between the penal labor system in Mississipi described by Hamilton then and contemporary debates over the mass systematic imprisonment of black American men today). More on that note - our protagonist or really, antagonist, Frank Hamilton has a run-in with the law and warns Mary Hamilton never to trust the justice system in America. Yet, when Mary observes the same judicial system dispensing "justice" to black men, she is comforted by telling herself 'that's how it is - justice has to be served.' Of course, this is a tiny point to make in a book that carefully and consistently draws a boundary between black and white over and over again. All that is to say, I recognize how tedious and dull a work like this might be to POC - just another polarizing work in the long list of white American authors that present black Americans with the same essentializing stereotypes - except this time, the white author is a woman.

Anyway, I'm no dummy, I know that's how things were then, and I think the book is a fantastic historical account for what it is. I was riveted, caught up in it, and I admired the main character so much for her toughness and her kind of archaic wisdom - so, while she is compelling - it's important not to romanticize her tale too much and to use it instead to think critically about the early narratives that gave birth to American values today - revel in the good but don't accept the bad... reflect, question, and change.

This brought me back home! Excellent narration!

Where does Trials of the Earth rank among all the audiobooks you’ve listened to so far?

Listening to this book took me back home to where I grew up in Mississippi. The main character portrays the strength and tenacity of a true southern woman. I felt like I was hearing my grandmother speak directly to me. Fantastic, authentic narration!

Trials of the earth

I absolutely LOVED this book!Barbara Benjamin Creel is fabulous as the narrator.It made me fee like I was sitting at Marys feet listening to her reminisces!Her trials and losses make one feel blessed to live in this age and not hers.I was provided this book free by the author, narrator or publisher.

Excellent book! The narration is phenomenal!

Excellent book!
So visual, such a strong performance.
The narration is phenomenal! She deserves an award.