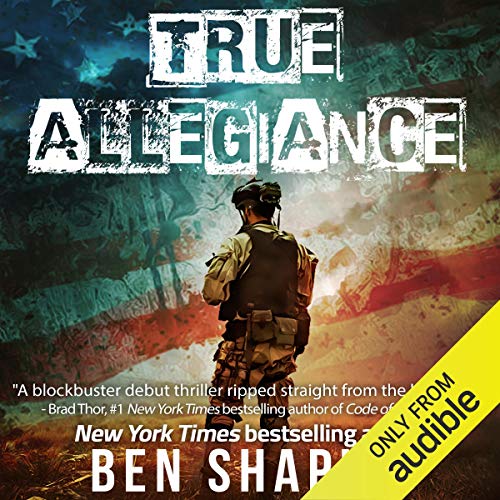 New York Times best-selling author Ben Shapiro's new novel asks how close are we to our country's collapse - and will we be able to stop it once it begins?

America is coming apart. An illegal immigration crisis has broken out along America's Southern border, there are race riots in Detroit, a fiery female rancher-turned-militia leader has vowed revenge on the president for his arrogant policies, and the world's most notorious terrorist is planning a massive attack that could destroy the United States as we know it. Meanwhile the president is too consumed by legacy-seeking to see our country's deep peril.

Brett Hawthorne is the youngest general in the United States Army - and he's stuck, alone, behind enemy lines in Afghanistan. He's the last lost soldier of a failed war, fighting to stay alive and make it back home - but will he be able to stop the collapse of America in time?

That said I look forward to the next book, hopefully with a different narrator.

Ben Shapiro's first novel was engaging and well written. Here's hoping there is a sequel in the works. Unfortunately, the narrator is one of the worst I've heard. Character portrayals were average but his voice when serving as the narrator was awful and distracting.

Narration was excellent. Great characterization and delivery. This book was a real treat. If Shapiro keeps this up, I will likely read every word he has ever written. This was my first exposure to him outside of YouTube and I was positively delighted! Keep 'me coming Ben!

Seriously. Where do they get some of these narrators? (Slow down! Maybe try for just a LITTLE variety in your inflection every once In a while? Take a breath now and then, at the very least!).

And then the story: predictable mellow drama. Can't believe I fell for the description.

I like this genre of story, so I took a chance on what was for me an unknown author. I'm familiar with Ben from his show and his speeches on campus. I like him and his viewpoint a lot.

The writing was just OK. The story slightly less so. The characters were not real, but sort of cartoonish. But, I could be wrong about the writing. It was virtually impossible to evaluate through the AWFUL narration.

Every so often I would think that the narration was computer generated, but then the narrator would place the inflection on a word that not even a poor algorithm would choose. It was very distracting.

I liked the story but was abit let down by the ending. I felt it was rushed.

Wow, I started this book and couldn't stop.

A thriller from beginning to end, I can't wait for the second book to come out.

True Allegiance is an amazing story that keeps you glued to the pages or your headphones depending on what format you're listening to. Shapiro draws from real life public figures to craft his characters in an almost uncanny way. While this book is fiction the parallels to our world are not too far off.

Ambitious debut novel by an ambitious man - and Shapiro came through big time! There has to be a sequel in the works! Narrator was kind of a happy robot though.

Would you listen to True Allegiance again? Why?

It was extremely engaging and the characters had a very real feel to them.

Would you be willing to try another one of Millian Quinteros’s performances?

If that is who the "reader" is no way!!! He was horrible, sounded like a robot. I was shocked at how bad he was.