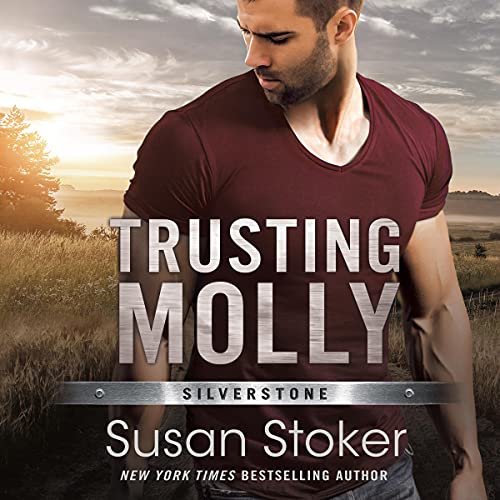 Written by: Susan Stoker
Narrated by: Lucy Rivers
Try for $0.00

From New York Times bestselling author Susan Stoker comes a heart-pounding installment in the Silverstone series about a love-shy ex-military man and a beautiful scientist reeling from a family tragedy.

When Mark “Smoke” Chamberlin ventures into the Nigerian jungle with his team of government assassins, his mission is clear: get in, kill the target, and make it out alive. With his extensive military experience, Smoke has no problem heading into dangerous territory. When it comes to love, though, he’s always been a little wary. But then he meets the beautiful, intrepid Molly Smith.

Schoolteacher Molly has been trying to outrun a lifetime of bad luck, and now she finds herself kidnapped along with a hundred schoolgirls in the jungle. But when Smoke finds them, Molly thinks her luck might be turning around - until she returns to the US to find her beloved grandparents murdered.

Devastated by their deaths and mystified by the turn of events, Molly turns to Smoke for comfort. But as Molly and Smoke grow closer, a different threat emerges...one that will put their relationship to the test and their lives in grave danger.

What listeners say about Trusting Molly

I recommend this book.
Once again Susan Stoker naild it. It was heartbreaking and funny in the same time.

I enjoyed the story. I thought sometimes the writer was a bit long winded about their feelings for each other. Overall though I liked the book. However the audio was horrible. The woman doing the narration trying to be all the characters was awful. She made Mark sound like a Neanderthal. Add more actors!!!

I really enjoyed this story! It was well written and pulled me in from beginning to end. I loved the connection between Molly and Smoke. Molly has had a hell of a time recently and believes herself to be bad luck. She is in for a different take on life after she connects to Silverstone as those men are a different breed and they surround themselves with the same type of people: good, genuine souls. It was awesome getting to see her change her negative outlook and blame that she has felt pretty much all her life. Smoke finally has that connection with a woman but he doesn’t want to push too hard too fast with all Molly has been through. I loved the communication between these two and they way that they stayed honest when things happened. They built a great connection without all the pressure on each other. I can’t wait for Gramps to get his story next.
The narrator did a good job being that extra element to the story to bring it to life.

Loved it. Kept my interest from start to finish. Will definitely read or listen to more!

Not realistic. I suppose guys like him could exist, and girls like her, but to be so attracted, with all the touching, and not progress? Yeah, that wouldn’t happen in real life. So many details were way too cliche, as if they had come from a teenager’s ravings about a crush.
Then the big sex scene was WAY too explicit.

The book did start off good. It could have been an interesting story if it had been written differently. As it was, I listened at 1.5 speed, and didn’t have any desire to slow down and savor any moments.

I love this series. These men. Every one of them. Give me the vapors.

This is Smoke's story, and it is fabulous. What a gentle, patient, dedicated man. When he's not killing bad people. Smoke literally falls for Molly in the Nigerian jungle on one of Silverstone's "humanitarian" missions. They're both great characters, and easy to like. Even if Molly is about as pig-headed as they come sometimes. But then, a seriously alpha male like Smoke isn't going to be attracted to a shrinking violet who lets someone else do the thinking for her, either.

Despite Molly's stubbornness, this may have been my favorite of the series so far. It's a little hard to tell. Every story this author writes is pure golden romance crack. I just can't get enough of her strong, protective men and these amazing thrillers.

Scenes with heat..Several after the 50% mark

The back story... H and his team travel to Nigeria to rescue girls captured by terrorists to be sold into sexual slavery. The h was at the wrong place at the wrong time and was also captured. Once rescued, the H kept her with him due to bad events at her home.

The Romance... Instalust develops into love.

The drama explosion... Bad guy does a bad thing

Final Notes... The bad guy getting access to the h after the H constantly promises to keep her safe, then how she gets away paints the team as incompetent. That was pretty frustrating.

If you are not a fan of damsel in distress, you may want to skip if it bothers you. The H's written by Susan Stoker all have strengths but she likes the H's to exude strength.

Loved this book by Susan Stoker and Lucy Rivers did a wonderful job with her performance in narrating this story and the characters. She brought this story to life for me as I was listening.

This book kept me engaged from beginning to end. A bit of suspense mixed with romance. Loved it. I couldn’t put the book down.