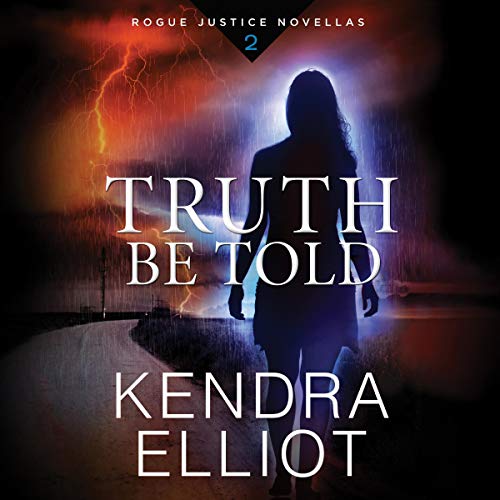 A torrential two-day storm has cut off the small town of Solitude, Oregon, from the outside world. But for police officers Stevie Duncan and her husband, Zane, the ravages of nature have nothing on the nature of man. In the last 48 hours, a child was a mute witness to a double homicide; an unidentified body has washed up on the riverbanks; and now, at the foot of a submerged bridge, two FBI agents have been found shot to death inside their SUV. What's worse, the young charge they were enlisted to protect has gone missing.

With the only exit out of town washed away, Stevie and Zane know that the murderer is trapped. But whatever's going on in Solitude is far from over - because as sure as the receding water, the killer is going to resurface.

What listeners say about Truth Be Told

Including the 4 novella Rogue River series and now the second novella in the Rogue Justice series this joint effort by Oregon writers Kendra Elliot and Malinda Leigh continues. It is a different kind of collaboration with Elliot and Leigh each writing alternating novellas rather than coauthoring them. The topic is always the Taylor family of law enforcement officials in Oregon's Rogue Valley. I have enjoyed all six of these quick moving and fast listens suspense mysteries. Kate Rudd narrates all and she is consistently outstanding.

Too short. Should be half the price for the length

it was a good sequel to the first but just like the first, it was too short. especially for the price.

This novella makes it worth it. A well detailed and written story that i enjoyed reading. The character are well developed and the plot is great, the conflict, the danger, the issues, situations, and choices. A must read to any and all book lovers everywhere.

This one took over right where the last book ended and they are still in the deluge of rain and cut off from the rest of society. Stevie and her Police Chief husband Zane are trying to maintain and get by and find out what happened to the murdered FBI agents while looking for Liam and his uncle without more bodies turning up. This one would have been better if it was just longer and fleshed out more. Kendra is such a great author and should not be limited to these short stories!

Money ruled all the main villain characters in this book. This author still hates the FBI & kids for some reason. Greed was a big factor in the production of this book. This book was less than three hours & this entire story could have been incorporated into the previous book. Instead the happy feeling you got at the end of the first book was replaced by the feeling that the author is laying the groundwork for a future serial killer in this poor boy. This boy has seen a lot of murders in his short life.. Now with the * ***** up situation the adults in his life have put him in & no mention of grandparents (but with the way their son turned out don't think I'd trust them with this damaged boy) foster care is in his future. OH WAIT! I forgot (NOT) this really, really, really small town happens to have a new transplant, TA DA a child psychologist, who just happens to maybe have a thing for the go to emergency foster parent who is the widow, mother & mother in law of several cops & the mother of A- wait for it -SOCIAL WORKER Now isn't that special ???

looking forward to the next book in the series. the narrative was great. easy listening while at work

Great story with plenty of action, suspense and emotional scenes. Wonderful narration by Kate again she does a perfect job bringing life and individuality to each of these wonderful characters. Definitely recommend this book.

So this book was very adventureous. The characters where great alone with the storyline. Thanks

Lots of action in Solitude

If you’ve been following the series then you know that this story follows one of the Taylor siblings, Stevie, and her husband, police chief Zane Duncan as they hunt for a kidnapped boy and the murderer of the FBI agents that had picked him up from Stevie’s mom. Lots of action and a great HEA! These novellas are quick but still have enough punch to keep you engaged. Looking forward to Bruce’s story.