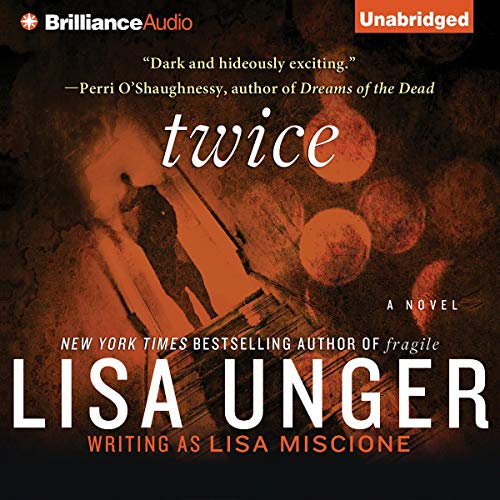 Written by: Lisa Unger
Narrated by: Emily Beresford
Try for $0.00

Acclaimed artist Julian Ross has just been found standing over her husband’s bloody corpse in their New York City apartment. Julian claims that she slept peacefully beside him while he was violently stabbed in their bed. But police are skeptical, especially since Julian’s first husband was killed and mutilated in exactly the same way. Julian turns to the tough-as-nails crime writer Lydia Strong, who plunges into the case with her signature grit and the help of her partner, P.I. Jeffrey Mark.

Meanwhile, Lydia learns that Jed McIntyre, the serial killer who murdered her mother, is on the loose in New York. McIntyre is out for Lydia’s blood, and his presence forces her to confront the evils of her past while solving her toughest murder case yet.

What listeners say about Twice

An immature Lisa Unger/Miscione gets her start

Like many other readers, I've greatly enjoyed Lisa Unger's newer books. I wasn't aware that this one was a very early effort, the third she'd written, originally published under her maiden name, Lisa Miscione. Would I have bought it, if I'd known? Probably, I wouldn't have known. Some early works by other writers have been just fine.

In her introduction, Ms. Unger tells us how she "met" her main character and couldn't get her out of her mind. The backstory is interesting enough, but I'd prefer the way Harlan Coben did it, in reintroducing his first book -- "Play Dead" -- republished many years after he'd become very successful. Coben averred as how parts of his first book make him squirm now, too, seeing his own immaturity, but still, there were good things about the book, and he was offering to his readers for what it was worth. (For the record, it's a great book.)

What's the problem? Just an immature writer, lots of high-handed preaching, too many lofty idealistic notions set into the plot, all of which gets tiresome after a while. One example: Part of the plot revolves around a community of homeless people who live in the tunnels and channels underneath New York City. The history of all those subsurface dwelling places -- and the people who live there -- is interesting, and has been explored in other books by other writers. Unger does fine in the history department. But as many young writers tend to do, she over-endows those homeless characters with way too much honor and virtue. Time and time again, we're informed that in THIS community -- underground -- "everyone gets a chance." Everyone will be left in peace, we're told, so long as they "obey the rules, don't hurt anyone and don't cause trouble."

So tell me: how exactly does that differ from the regular world upstairs?

If these homeless and disaffected (and many of them mentally ill) could have followed those three simple rules, wouldn't they now be living in a nice 3/2 bungalow with a picket fence in Poughkeepsie?

Bottom line: too much preaching, too much lavishing of praise on the virtues of the homeless and disaffected. It makes you wanna growl after a while.

The narrator has her own annoying habits -- that's about the worst Brooklyn accent I've ever heard. But not even a great narrator could have made this heaping dose of moral high-grounding go down pleasantly

Found the storyline very interesting and was entertained trying to decipher the actual motive of the murders and the killer until the end. The narration was reaspnable but please work on the Australian accent. As an Australian I don't know anyone who speaks so poorly.

Story is ok. Attempt at strong heroine ends up as someone who does obviously stupid dangerous stuff. Hard to care what happens to her.