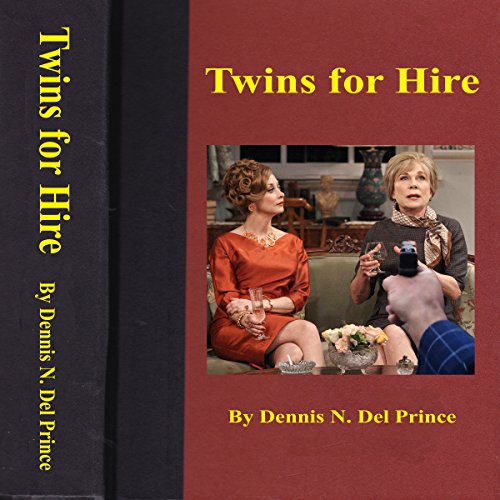 Twins for Hire is a novella that narrates the adventure of two men who are hired to find a family member before the reading of his father's will. The task becomes far more complex than what they were hired to do, as they become involved in a high-stakes game where the murder of most of the family is planned.

What listeners say about Twins for Hire

Would you listen to Twins for Hire again? Why?

Yes, it was entertaining and short. It is a story about twins hired to get a relative to the reading of a will in which an inheritance of almost 500 million is to be divided up between a few relatives. And one is not happy until she has it all.

The story had a twist at the end but the twins saved the day.

Terry Kimmel sounded OK. I had never listened to any of his narrations before.He was clear and easy to listen to.and I would listen to another book by him.

The climax of the book was the reading of a will that was to divide up an inheritance between family members. And one was not happy sharing!

Interesting short story. I would recommend it to anyone who likes mysteries and doesn't want to spend too much time at it.

The characters could have been developed more.

If you’ve listened to books by Dennis N. Del Prince before, how does this one compare?

I have never listened to any other of his books.

What aspect of Terry Kimmel’s performance would you have changed?

Not much, it was pretty good.

I think so, but it would need to be developed more. It has a good plot and story.

It was an OK audio book that could easily have been twice as big and twice as entertaining.

Twins bring a hermit back to society

It was well written and it was short.

Would you be willing to try another book from Dennis N. Del Prince? Why or why not?

Yes, I would like to hear additional audio books.

Good short story, I did not give it higher marks because it was short.