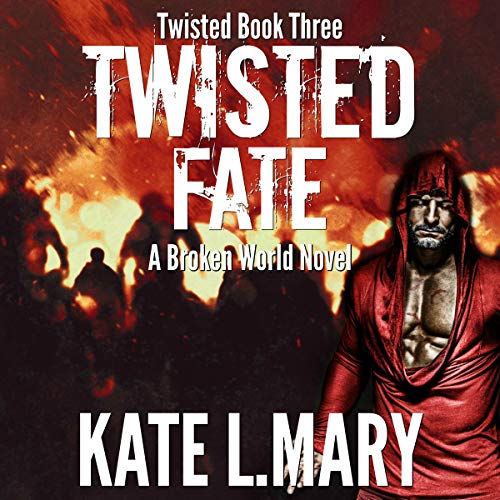 The world Megan James thought she knew has been slowly unraveling. Her father disappeared and was presumed dead, her mother's sanity started to slip away, and the safe world she'd always thought she was living in slowly began to reveal its very dark and twisted depths. With the discovery that both her father and long-lost uncle, Angus James, were alive, Meg thought she'd finally learned all the secrets New Atlanta and the CDC had to offer, but she soon discovers the surprises have barely begun.

With Jackson Star's threatening presence looming over them, Meg and her family are forced to flee the walls of New Atlanta, leaving both Axl and Donaghy, the man Meg has come to care so much about, in the CDC's clutches. Knowing that rescuing them will be no easy task, the group turns to a very unlikely source, and Meg soon discovers her long-lost uncle has more than a few shocking secrets to share.

After two decades of living behind walls, it looks like the end of the zombies could be in sight, assuming they can break into the most fortified building left in the world. Luckily, Angus James knows exactly what to do to make it happen.

But Angus isn't the only one with a few tricks up his sleeves. When Jackson Star suddenly decides to release Donaghy, it isn't out of the kindness of his heart.

With the clock ticking more than ever, Meg finds herself in a race against time. Success means not only saving her family, but the whole world as well, while failure could very well mean a life of living as Jackson Star's slave.

Taking down Star and Jackson


Narrator: Solo performance by Heather Firth. She does a decent job performing all these characters. For a female narrator she does a believable performance of the male characters. Yet, It would be better having two narrators because there were too many characters to keep track of with one performer. Heather is good, but one person is only capable of so much. Every voice began to blend together. Imagine watching a movie where one actor performed all the character scenes in a character driven movie, that’s a task meant for a variety of performers. Did this hinder the outcome? No, but separating the male and female characters speaking would be easier to identify if voiced by different narrators.

Story: When a family sacrificed safety and lives to travel to the safe haven of New Atlanta only to find out that the CDC was just as dangerous. This is the final installment where the resistance is formed by rebellious survivors seeking justice and revenge against Star and Jackson.
These survivors would rather take a chance on the outside of the walls rather than be controlled on the inside.
All the previous characters return in this final installment. Still a character driven story with a some new characters.

Overall: I no longer go searching for zombie apocalypse books, yet when given the opportunity to listen to this series was offered I gave it a try.
I thought the attack was too easy. I expected Jackson to behave differently when attacked. I thought Meg had something special about her since Jackson had been obsessed with her, yet nothing was revealed. I was confused by some of the characters ability to survive.
If you’re a fan of the Walking Dead and remember that episode with the CDC and wanted a different understanding on what would happen if the CDC worked on a virus that didn’t cure humans but rather made them stronger, quicker, and more dangerous then this series will impress you.
I had a hard time believing the CDC didn’t have cameras inside the rooms.

AWESOME STORY!! I HOPE WE GET ANOTHER ONE!!!

This was incredible...I am so excited I discovered this Author!! I was on the edge of seat...screaming out loud and could not put it down!!! Narration, story..everything was great!!! I Highly recommend this series!! Just one click them all and thank me later!!! :

2 of 3 people found this review helpful

Twisted Fate all is revealed while bringing everything together. I really enjoyed the ending. If you read or listened to the previous books, this is a must. The Twisted series is a great addition to the genre.

Kate L. Mary created a fantastic zombie post-apocalyptic world. The writing is excellent, with an intricate plot and intriguing characters. Heather Firth's performance deserves five stars or more. Her ability to modulate tone and pitches is exceptional, particularly for males.

I was given a free copy of this audiobook at my request and have voluntarily left this review.

Such A Jorney of 3 books

Performance as in all the books in this series was spectacular, Narrator did an amazing job expressing each individual character.

The story held many suspenseful moments the end was to my opinion worth the HEA.

Honestly...what is not to love about this series!?

I loved this book and series! just plain ole good story telling. also narration is super solid just like the other books! to be honest I finished the series in a couple 2-3 days. This was a pleasure to listen to and probably one of my favorites of Kate L Mary.

It all makes sense

This series has had me feeling “what the hell” at the end of every book! It now all falls into place and that was so satisfying!! Kate you are an evil genius!! At the end of the last book I was somewhere between I hate this author and I’m going to kill this author! Lol I’m now totally in love with this author. Heather you have done a great job throughout.
#audiobookobsessionreviewer

I thought that this was a wonderful wrap up to the series. I devoured Kate L. Mary's Broken World series earlier this year and after learning that this series featured the same group of characters, I couldn't wait to get started with it. It has been great to see these characters grow and survive and I enjoyed getting to meet new characters in this series. This book really did pull everything together very well and I had a great time with it.

This is the book where things really start to happen. Angus is alive and his friends know it. They also know how much danger Axl and Donaghy are in. At this point, not only do they want to rescue their friends and loved ones but they are also looking for some revenge. If anyone deserves revenge, I think Angus does. There are several points of view in this book and it worked well since the characters were not always together or looking at the situation in the same way.

This story was really exciting. There was plenty of action and I found myself worrying about the characters. There were quite a few surprises as well. I loved getting the chance to watch this group of characters working to make the world a better place even if it cost them. I was happy that this book left me with some hope for the future and I feel really satisfied with how things were wrapped up. My only complaint with the story would be that the last part of the book felt a little drawn out but nothing that lessened my overall enjoyment.

I thought that Heather Firth did a great job with the narration. There are quite a few characters in this series and a wide range of emotions that they experience. I thought that she did a great job of giving each character their voice and bringing them to life. The narrator reads the story at a really nice pace and I feel that her performance added to my overall enjoyment of the story.

I would recommend this series to others. I do feel that this is a series that is best read in order. I love the world that Kate L. Mary has created and the characters are amazing. I will definitely be reading more from this very talented author.

I received a review copy of this audiobook from the author.

Like so many of the author's previous books, this one didn't fail to let down. Really enjoyable.

After twenty years of imprisonment, Angus is set free! This volume will focus on the overthrow of the Starr dynasty and the stranglehold of the CDC. Bringing the James family back together is the other focal point. There are a few sad moments and some of the key players will not survive. All in all, the closing volume is uplifting and full of hope. It is a story of hope and starting over. I was given this free review copy audiobook at my request and have voluntarily left this review.

Talking with the author this is the last book in the Broken World Twisted series, and that's such a disappointment. The world Mary has built, and the way Firth brings it to life is so enjoyable and fun. The story is a reasonable ending to what has been revealed but there's so much more that could be done here in this time period in this world and I'd love to have it continue.

I hope the publisher will reconsider after looking at ratings, or at least release the rights back to Mary so she can continue playing here. Either way well worth the time and a nice wrap-up of the story that was given.

I received a copy of this book at my request in exchange for a fair review.