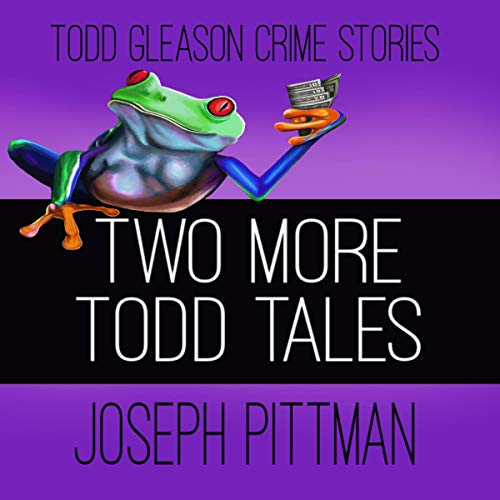 Written by: Joseph Pittman
Narrated by: Mark A. Taylor
Try for $0.00

Todd Gleason, the charming and dimpled con man who last appeared in Two Todd Tales, returns for the first time in more years than he’s willing to admit. The author, too. In these two novellas, cons abound and suspicion reigns. It’s crime fiction...with a laugh track.

In "The Mystery of Marilyn and Her Men", Marilyn Mackenzie is an old friend who has just lost her fifth husband. Lost, as in died. And yes, her fifth. Poor Hank Dilfer got bashed over the head by a deer foot, the latest of Marilyn’s matches to meet an early end.

Don’t worry about her, she’s fine, living a life higher than her Manhattan penthouse, her bank accounts filled with the spoils from her spouses. Her heart, like always, is ready to move on, and see, that’s where Todd enters the picture.

He’s never one to miss an opportunity for a cool con that could fill his coffers. An unexpected financial windfall could come Todd’s way if he’s able to prove Marilyn’s innocence of Hank’s murder. Too bad he thinks she’s guilty as hell.

Is Marilyn a black widow, or is something more nefarious afoot?

Then, in "The Business with the Bumbling Blind Man", it’s a perfect autumn day that finds Todd Gleason strolling through Central Park when he eyes something odd - an elderly man stumbling forward into a pond.

First on the scene, Todd rescues him, only to learn he is blind and had lost his footing. Or, maybe not. Soon, Bartholomew Vasgersian proposes a big payday for Todd: come to his estate and find out which of his relatives is trying to kill him before he inherits a fortune.

Todd agrees, but he’s about to meet his match with an assortment of Vasgersian relatives that are loonier than the next. Turns out, one of them jumped off the turret at the estate just two weeks ago. How does that tie in with the threat Barth feels?

Is Todd seeing all he thinks, or is he flying blind?