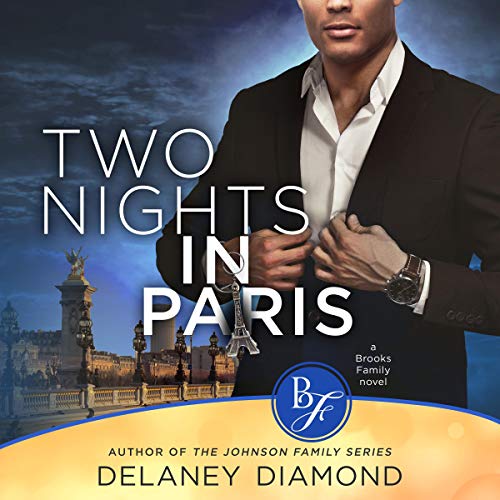 Written by: Delaney Diamond
Narrated by: Sean Crisden
Try for $0.00

To prove to his mother that he can be responsible, Stephan Brooks takes a job at her firm and promises to be a better son. But one glimpse of Roselle Parker, her up-and-coming protégé, and all his good intentions disappear. All he has to do is conduct himself in a professional manner, but a trip to Paris with Roselle proves too big of a temptation.

Roselle knows Stephan Brooks is nothing but trouble. She’s heard the stories, and her brief contact with him confirms they’re all true. But two nights in Paris and her inhibitions crumble beneath his seductive touch. They plan to leave what happened in Paris, in Paris. But the best-laid plans often go awry.

What listeners say about Two Nights in Paris

I Am Loving The Brooks Family!!!

We had way more drama in Two Nights in Paris than we had in the first four books. I was Team Roselle up until she broke my man's heart. Damn you Roselle (shakes fists dramatically)! She and Stephan were vibing harmoniously with that new relationship bliss . Gettin' it in every chance they got and, honey, they got it in. Stephan actually fell in love and wanted to be boo'd up all monogamously. Then real life intervenes and, bam, Auntie Betty dies. This sends Roselle on a spiral she just cannot get out of. She breaks up with Stephan, finds out she's pregnant a month later, and still refuses to get back together with him. I wanted to fight Roselle. She created a whole lot of unnecessary drama between the two of them. I get that she felt guilty for not being there when Aunt Betty died but, she was still doing the most. While I was not a fan of her dramatics, Roselle really was good for Stephan. She bought out the best in him and made Stephan a better man. I loved them as a couple. My only issue with this book is the author incorrectly referring to Kappa Alpha Psi as Kappa Alpha Sigma. It really angers me off when black authors make mistakes like this with regard to black culture. A quick Google search would've given her the correct name for that fraternity. A quick phone call to anybody black would've given her the correct name. Going forward, please do better. A little bit of research goes a long way. But, I digress. Two Nights in Paris was a solid story with a solid romance. Roselle and Stephan's HEA was hard fought but, they finally got it. Well done!

I loved the storyline. I enjoyed reading it in a night. Keep up the good work. I have one more book in this series. Love your writing from one island girl to another.

The performance was excellent. The storyline wasn’t as good as the first book with Malik. It was just ok.

Delaney Diamond did it again!

Love it! Delaney Diamond always pulls me into her stories. I find myself listening to them over and over again! I started with the Johnsons and I've been a fan of all her books. Can't wait until the next book. I want more!!!

Great storyline as the series continues. I love Stephon’s character; he is one smooth and confident brother. Sean continues to do a great job with the characters; he is the perfect narrator for this series. Looking forward to listening to the next book!