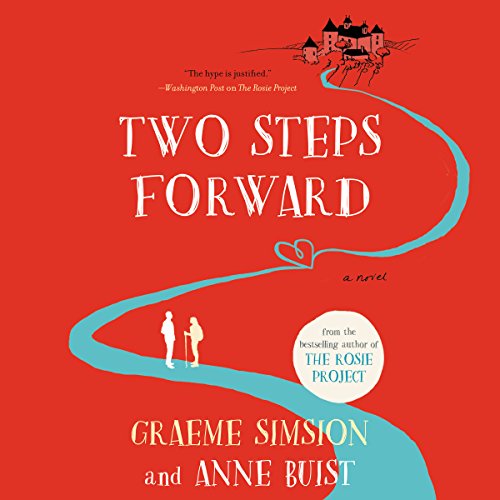 From the New York Times best-selling author of The Rosie Project comes a story of taking chances and learning to love again as two people, one mourning her husband and the other recovering from divorce, cross paths on the centuries-old Camino pilgrimage from France to Spain.

“The Chemin will change you. It changes everyone…”

The Chemin, also known as the Camino de Santiago, is a centuries-old pilgrim route that ends in Santiago de Compostela in northwest Spain. Every year, thousands of walkers - some devout, many not - follow the route that wends through quaint small villages and along busy highways alike, a journey unlike any other.

Zoe, an artist from California who’s still reeling from her husband’s sudden death, has impulsively decided to walk the Camino, hoping to find solace and direction. Martin, an engineer from England, is road-testing a cart of his own design…and recovering from a messy divorce. They begin in the same French town, each uncertain of what the future holds. Zoe has anticipated the physical difficulties of her trek, but she is less prepared for other challenges, as strangers and circumstances force her to confront not just recent loss, but long-held beliefs. For Martin, the pilgrimage is a test of his skills and endurance but also, as he and Zoe grow closer, of his willingness to trust others - and himself - again.

Smart and funny, insightful and romantic, Two Steps Forward reveals that the most important journeys we make aren’t measured in miles, but in the strength, wisdom, and love found along the way. Fans of The Rosie Project will recognize Graeme Simsion’s uniquely quirky and charming writing style.

There is a lot of interest in the Camino trail. It’s one of the reasons that I picked this book. I also loved Simsion’s Rosie books.

The male protagonist, Martin, is lovely, flawed but relatable but the female, Zoe, was just plain nasty so it was hard to care about her journey. There are also a ton of misunderstandings. Just an overplayed literary device, too many for one book. Liked it , didn’t love it. Maybe I need to walk the Camino then try it again!

felt like I was reading it myself.. it's just nice to listen to this story

if you dream of travel, if you've ever thought of walking the camino, or just get away from it all, these characters will take you there.

An interesting journey, both on a modern-era self-analysis and on an ancient pilgrimage route through France and Spain. Enjoyed Simon Slater's performance, as his voice reflected Martin's mental and physical changes along the journey. Penelope Rollins not so much, as she sounded about the same from beginning to end, despite Zoe's supposed growth from her experiences. Well-written and researched. Love the technical info from an engineering perspective. I've definitely become a Graeme Simsion fan!