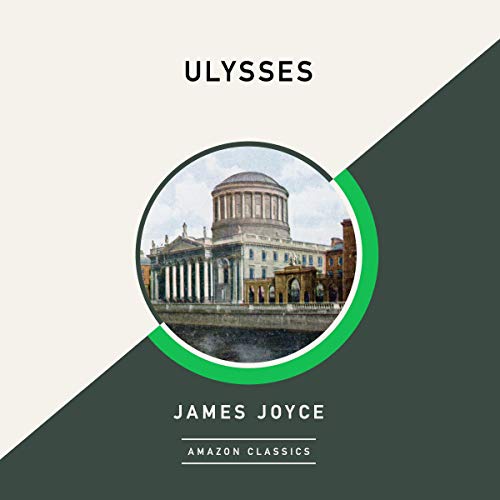 James Joyce’s landmark novel traces the course of three characters on one summer day in Dublin. First, there’s middle-aged wanderer and appeasing cuckold Leopold Bloom. He crosses paths with Stephen Dedalus, a young aspiring writer flirting with indulgence. Among a gallery of generous, ebullient, and brawling Dubliners, Bloom and Dedalus find in each other, for a few hours, a spiritual father and son. Then there’s Molly, Leopold’s wife. Conflicted about love, marriage, motherhood, and sexual longing, she’ll spend her afternoon with a lover. Later, as day turns to night, with Leopold beside her, Molly brings an odyssey to an indelible end.

You never know what you’re going to get with the Amazon Classics series. Some of the titles are so-so: they’re workaday products that get the job done, but not much more. Others are really good, like this one — good enough to hold their own with their name-brand cousins from Recorded Books, Blackstone, or Naxos.

I haven’t seen or heard Aidan Kelly do anything else, as far as I know, but he takes off with Ulysses like he’s been practicing for years. It’s a lively reading in a voice that sounds VERY Irish. He clearly appreciates the humor in the novel, and he does a good job orchestrating the voices. His voice has enough variety and energy to keep the pace going — not much chance of mistaking Bantam Lyons for Nosey Flynn this innings. I was able to listen to it for long stretches, often hearing things as if for the first time.

One of the big test cases in the book is Episode 12, the “Cyclops” chapter. This is a cacophony of comic voices and characters mixed in with increasingly absurd parodies of news accounts and Victorian translations of medieval romances. Kelly pulls it off beautifully, and in fact I enjoyed it so much that as soon as it was done I listened to it a second time. The other big test case is the “Circe” episode, a hallucinogenic nightmare that must be a nightmare for the narrator: it’s written as a playscript, but one where gas jets talk and Leopold Bloom’s sexual fantasies take off with a vengeance. Once again Kelly comes through: I would put his insane reading of this episode up against any of the others.

When all is said and done, I’d have to say that really, this is one of my favorite recordings of the book. It has a liveliness about it that I find missing from some of the others, a liveliness that makes Dublin come alive. One of the things I especially enjoyed is that Kelly actually sings the songs, including the clock chimes, instead of just repeating the lyrics sing-song as is the case in several audio versions of the book.

As is the case with many recordings of Ulysses, an actress takes over the proceedings for Molly Bloom’s soliloquy. In this case it's Alana Kerr Collins, another performer I was not otherwise with; but as with Aidan Kelly, my ignorance of her career says more about me than about her. The book as a whole is an Olympic event, but Molly’s monologue, the two-hour half-asleep musings of Bloom’s wife, is a particular challenge: the text is virtually without punctuation, and the reader has to fish out the emotional continuity from what looks at first glance like a word salad. Collins takes to it like a life-long Joycean, capturing the rhythm of Molly’s thoughts with careful pauses, and brings the novel to a triumphant conclusion on its final quiet YES. Listening to her brilliant reading of this episode, I can believe that Molly Bloom has a career as a singer.

Not much to say about the book itself. It’s one of the funniest ever written and one of the saddest. (A good example of both: Leopold Bloom’s interior monologue, at the end of a burial service, includes a jingle: “Hope you’re well and not in hell.”) As Captain Kirk once said of Spock, of all the books I have read, Ulysses is the most HUMAN.

If you’re coming to it for the first time, my advice is: get what you can from it and don't worry about the rest of it. Nobody can get it on a first reading. It will come in time. Get one of the many study guides available to keep you on track. You don’t need to understand every reference to appreciate what’s happening to the characters, but you might need a straightforward narrative summary to cut through the internal monologues.

(Speaking of the episodes.... one of the drawbacks as far as this recording is concerned is that each “episode” in the book is divided into multiple tracks, and there are no episode numbers or titles to let you know where you are. It may help to know that there are 18 episodes in the book organized into 3 parts. In the recording, the episodes are separated by short pauses. )

Good job all around. Bottom line: this performance of Ulysses is golden. I'm going to keep my eye out for other titles by both narrators.

This book is a CHORE to get through. If you're thinking about reading it, I highly suggest some sort of abridged version instead, or to simply read Infinite Jest, a much better book inspired by this one. While sections of this are great, there are literally hundreds of pages of unnecessary crap to wade through to get to anything good. There's basically no story. A man is worried his wife cheated on him, while he goes to a funeral. There's a great long dream sequence allusion to The Odyssey. The rest is just obscenely antisemitic conversations, racist conversations, and tawdry sex conversations. I was not a fan of this book, although some parts of it were impressive with its use of language.

A Novel About Nothing

"Ulysses" is perhaps the most unique novel I have ever read. It's stream of consciousness style of storytelling is not for everyone, and it can be confusing at times, but I quite enjoyed it. Reading the text alongside an audiobook such as this enhances comprehension, and is valuable for a work such as this. The narrators, being Irish, add a sense of immersion to the novel, which is so heavily saturated with Dublin imagery. I recommend reading the text alongside this audiobook, to get the most out of this classic work as possible.

A Brilliant Performance of a Terrible Book

I ordered the book and began to read it. I quit after two chapters. The performance of the audiobook finally made the story intelligible. But it is still an awful story. I will never read (or listen to) anything written by James Joyce again. The story does not hold the reader's/listener's attention. The reader/listener does not care about the fate of the characters. And in print it is an unintelligible mess. At least the audiobook allows you decipher what is happening. Even then, you do not care.

I’ve struggled to get through the whole of Ulysses for many years. A long trip to Dublin helped mightily to bring the sites and scenes to life. Hearing the book read so well by such a capable Irishman, listening daily on long dog walks, has made the book truly entertaining and pleasurable. I listened to clips from a number of versions - this is by far the best. Truly excellent.

What a mind! It is tough to finish but generates lots of reflection. Hang in, it's worth it.