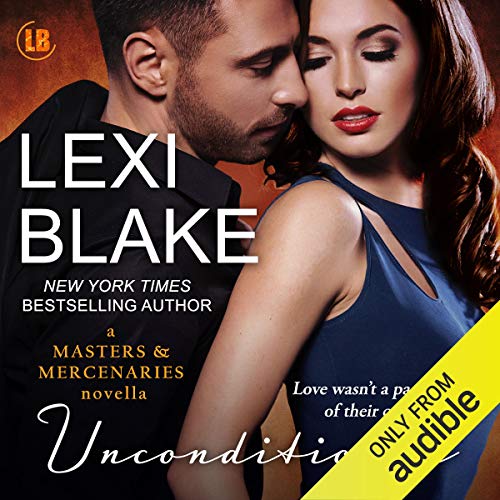 Written by: Lexi Blake
Narrated by: Ryan West
Try for $0.00

Keith Langston believes in living in the moment. Haunted by the past, he moves from one casual relationship to the next and never looks back. But the moment he lays eyes on Ashley, something primal and possessive takes over. He can't stop thinking about her and yet he knows he can't offer her what she needs. Having her seems impossible until Sanctum's owner, the mysterious Ian Taggart, makes him an offer he can't refuse.

Offered the chance to train Ashley and initiate her into the D/s lifestyle, Keith is delighted to accept. Under the guidelines of a carefully crafted contract, they lose themselves in the pleasures and intimacies of being Master and submissive. But when Ashley and her daughter are threatened, Keith realizes she needs much more than a part-time Dom. To protect her, he will have to break through the barriers of their contract and finally face the demons haunting his heart.

What listeners say about Unconditional

She takes a sad billionaire

These are not very well known secondary characters, but they grew on you just as the main characters do. It still has the hot sex and emotional storyline, as well as a baby to open up a sad past. Great narration by Ryan West.

It had it's moments

As a rule, I rarely like novellas; they're too short. This one was just over five hours, and overall, I enjoyed the story. I even woke my husband by laughing out loud at a baby vomit moment. (Likely, only a parent would find it amusing ) I think the story could have easily been made into a novel and would have been better but, It was an enjoyable listen.
-V from Kansas

The story was wonderfully written as well as read. I was just in shock how quickly it was over. Only half as long as others in the series. It would have been nice to get a little more.

A little lighter side of M&M series

No one is being shot at or targeted for death in this novella. It is a little lighter side of the Masters and Mercenaries series.
But still as hot as all the others!

short and cute story. must have liked it. listened to it twice. narration was good

I really enjoyed this book.  I can't wait to read more books by this author.

I am in love with this series of books. It is like I get ready for the next book as soon as I finish one.

I listened to this novella which was twice as long as the book about Ashley's sister Jill. The narration was excellent and provided two or three different accents.

Ashley and Keith both had difficulties to overcome but Ashley seemed to be able to handle hers much better. Keith didn't come across as very "dom-y" to me until he found out Ashley had been keeping a secret from him.

I liked Ashley's character. She had some self esteem issues. She referenced sexual acts and body parts like she was a little kid. BUT, Ashley was strong enough to want to work through her issues. Granted, being Keith's sub helped her. Her friendships with other subs also helped. One driving factor for Ashley was wanted to be better for her daughter Emily.

Keith had a much more difficult time working through his past. I'm glad he made sure to help Ashley resolve her problem even if he wasn't with her.

I wish we could have seen a little more interaction between Keith and Emily, and Keith and his parents.

The story is cute and predictable. Nothing major happens but then it can't in 5 hours. Too short of a story.

I didn't feel the chemistry between the two people. The "I love you"s happened too fast.

Ashley who is a waitress with $600 to her name and Keith is a billionaire. Having that much money, one can do pretty much anything.... like hire a babysitter... get her a car, a nice place, clothes, ... so much. I just didn't "feel" his richness.

This is a cute short story... please don't expect too much like I did... and just enjoy the ride.

This was another great listen! I'm really enjoying the series. I'm on to the next book!