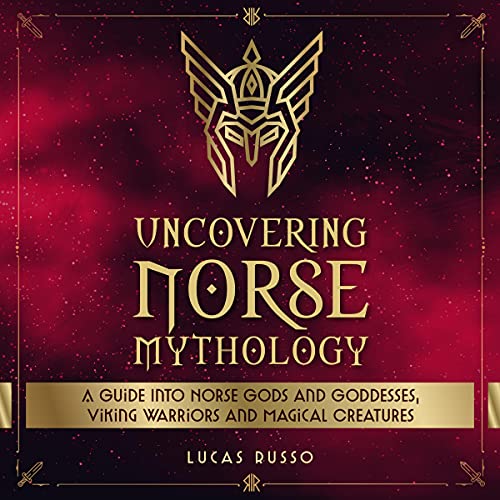 Written by: Lucas Russo
Narrated by: Jared Zak
Try for $0.00

Delve into the fascinating history of Norse mythology with these thrilling tales of battle and magic....

What do you think of when you hear the words "Norse mythology"?

Chances are, your mind goes straight to Thor or Odin, some of the most well-known Nordic gods.

But their stories barely scratch the surface of the complicated and fascinating myths of ancient Scandinavia.

As Germanic tribes clashed and reconciled, a rich and detailed realm of the gods was created through the melding and exchanging of stories and characters that reflected the complicated historical events around them.

The clash of the Vanir and the Aesir, or the old and new gods, is thought to be indicative of a real conflict between two tribes that later found a way to coexist.

Through developing an understanding of the stories that remain, you will learn about the intricacies of ancient Nordic culture.

Beginning with the historical background of the Viking Age, you will become familiar with the creation myth, and discover the complicated family trees that the gods and goddesses of Asgard created.

You'll uncover the most important figures in Nordic culture, and find out how their existence continues to be relevant in the modern day.

In Uncovering Norse Mythology, here is just a fraction of what you will discover:

Another new and unexpected book with this masterpiece by Lucas Russo

The vivid language instantly transported me into another universe, immersing me into deep Norse Mythology roots.

I enjoyed this book. It's easy to understand and the author enjoyed writing and researching the book. I was surprised when it ended. I love the glossary and pronunciation chapter, it's difficult to know how to pronounce a language that is not native. Recommended for beginners, like me, or anyone who wants a historical view.

I worked through this book with my class and they loved it. It kept them entertained and actually wanting to hear what crazy thing Loki was going to try next!

loved this book. I enjoy a lot of works by this author this is no different. I also love the way he narratives the book.

I thought I knew a few things about Norse myth, but this was unexpected and delightful. Lucas Russo has done a great job of weaving these disparate stories into a larger tapestry.

I really enjoyed this listen. The narrator had great range with all the characters and the stories kept my attention.

Each story is fun to listen to. I wouldn’t mind hearing these stories over again.

Loved the writing and performance.

Loved it. Definitely an amazing experience. Best norse mythology book I've ever heard. It's so fascinating to understand how this mythology is, you only ever hear about the Greek one, but norse mythology is so rich and wonderful. Would definitely recommend. I know I will listen to it again in the future.

Everything about this book was intelligently interesting, funny plus made you want more. The last chapter felt a bit rushed but all else, I would definitely recommend.

Every time I listened to this at any length I would dim the lights quiet the company around me and allow us all to immerse in the story and hopefully as I did. That they too would feel as if they were at an old Nordic campfire hearing the stories from the bards of old.