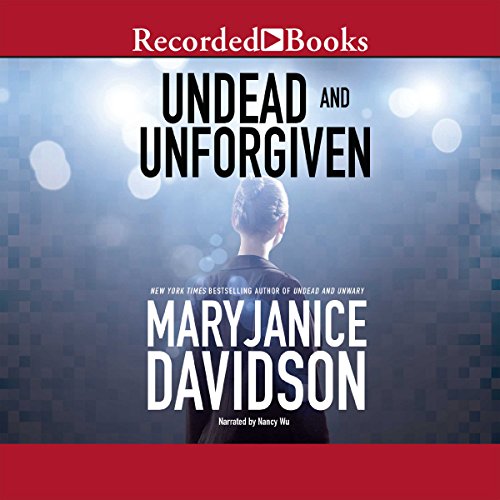 If Betsy Taylor has learned anything about ruling hell, it's: 1) she can't do it alone, and 2) she doesn't have to. She's got the help of a devoted vampire king, a dateless zombie, an exhausted new mom, an unshowered cop, a bitchy ghost, a kindly dead priest, and her late stepmother ("go Team Satan!"). But the latest major hurdle in her postdead life is so big she can't even see it until it's on CNN. Betsy's father and half sister Laura (a former Antichrist with a grudge) have outed Betsy to the world. It doesn't take long for the story to become 24/7 headline news. What's more, people are not only prepared to believe in vampires; they want to kill them.

For Betsy, social media has never felt so unsocial. Before long the mansion on Summit Avenue is swarming with reporters, would-be vampire/zombie killers, and desperate emos begging to be turned. Betsy has been forced into the unenviable role of the reluctant face of the vampire nation. All she knows is she has to look good - this is hi-def! - and stay true to who she is.

Ambling at first, but back in the groove

This book 14 is back in the groove. It starts off a little rambling, but by midway through the novel finds its groove. I don't want to give anything away, but lots of good stuff happens in the last half of the book where you have to say -- finally Betsy has arrived. For the 14th in the series, Davison has done an excellent job of keeping Betsy interesting and growing, this is as much as a ditsy vampire "trope" can. Trope is Davison's latest cool word and she used it a bunch of times in this novel -- she must be reading the theory of writing or something.

Anyway, trope or not, this is a very nice next installment. I am looking forward to the next one. I wonder where she is going to go from here. As you surmise, I recommend Undead and Unforgiven. Listen on!

Overall great but a lot of footnotes...

The large number of footnotes are indicating previous books but there are so many it starts feeling like an advertisement or just an audiobook that keeps getting interrupted. I’m not sure whether an endnote would work better— but it just really starts mucking with the flow of the book. I know there are a lot of books before this one but maybe just a note in the beginning stating there are several books before this etc, like some series do.

Best in the series

Betsy comes into her full self in this one. really enjoyed, and will be thinking about parts of it for a long time

Full disclosure: I just love MaryJanice Davidson’s books- all of them! Nancy Wu is the perfect narrator. She does a great job: her voice sounds just like I imagined Queen Betsy’s, her speech is clear and easy to hear, and each character had a different voice. Nancy Wu is very gift

The end of Betsy the Vampire Queen is coming.

I have enjoyed the entire series. this book was no different. with the same quick with and fun situations I flew through the story in no time. I find myself dreading the next and final book. I truly hate to see it end. I will miss this crazy group.

Great writing but sometimes the author gets really hung up on certain concepts like raping Sinclair I’d say since he was after her first it was more like seduction.
And Nick or Dick that wasn’t brain rape it may not have been right but that’s awfully harsh. They erased some memories but really there are some issues there. Then the cat disgusting and on and on. Laura OMG awfully Godly for the Antichrist did the author get born again while writing about vampires. I mean it’s all really funny and I do like the books. However there just are a few points were she goes over board.
Ok also I agree with another reviewer enough with the footnotes. Not funny.
Good sex scenes. I love Jessica. I love the crazy babies. I will probably listen to these books again in the future. I just put my pet peeves about the books first because it bothered me that much.
With some caution to cat lovers and those sensitive to animals there is a Zombie he doesn’t eat brains but he does dissect nothing is as gross as the complete description of cat guts. Also these books have sex scenes and are meant for adults. The story would be fun for young adults but discretion should be used.
These books are funny and worth the listen!

The last couple of Betsy books made me want to hurl them out the window and give up on the series altogether. This book was sweet redemption. Thank god... Sorry Tina (inside book joke) super funny super witty fell in love with Betsy all over again... Wish there'd make this a series HBO anyone... But they'd screw it up like they did true blood... Overall a success

I've really had a hard time with the last few books. I'm not a huge fan of so much internal dialogue from Betsy. Sometimes it goes on for so long I forget what's actually going on in the back story. This book had some, but not nearly as much as the last few. I love the story, and it was nice to see it move along.

I had forgotten how bad this series is/was! I loved the first book, tho each book after that got worse and worse and now, even worse.
Without the explicit sex, this series would be perfect for middle school kids. They would find it hilarious!

Better than the last few

With so much of Betsy's introspection, I think this would be a better read than listen.

Would you recommend Undead and Unforgiven to your friends? Why or why not?

It's better than the last few but not great. I find a trend in current sci fi where you start with a bang, meander along, then throw down an ending out of no where. In the meantime, the characters are just moving from one random event to another.

Could you see Undead and Unforgiven being made into a movie or a TV series? Who should the stars be?

Ugh...absolutely not. Betsy is no longer likeable. Hasn't been since the first couple of books. She sort of gets a clue but her revelations are ruined by her general idiocy. It didn't flow.

If a had one credit, I would not have wasted it on this book.