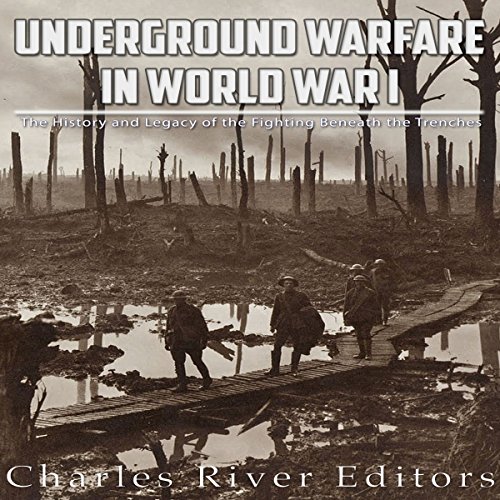 Underground Warfare in World War I

"It was a pretty gloomy business. We started sinking this shaft and it filled with water, so we pumped it out with hand pumps - lift and force. We got down about 10 feet or so. It was heartbreaking - I hated it. But I had to keep my men going. The Boche [Germans] saved us. We were making a lot of noise with spiling [timbering the tunnels]. The Boche opposite us were Saxons, rather friendly, and they put up a notice on a blackboard, 'No good your mining. We've tried. It can't be done.' The notice was in English. I reported this to my OC and it went up to HQ and they stopped the mine." - Major General F. Gordon Hyland

World War I, also known in its time as the "Great War," or the "War to End all Wars," was an unprecedented holocaust in terms of its sheer scale. Fought by men who hailed from all corners of the globe, it saw millions of soldiers do battle in brutal assaults of attrition which dragged on for months, with little to no respite. Tens of millions of artillery shells and untold hundreds of millions of rifle and machine gun bullets were fired in a conflict that demonstrated man's capacity to kill each other on a heretofore unprecedented scale, and as always, such a war brought about technological innovation at a rate that made the boom of the Industrial Revolution seem stagnant. World War I was the first truly industrial war, and it created a paradigm which reached its zenith with World War II, and towards which virtually all equipment, innovation, and training were dedicated throughout the Cold War and the remainder of the 20th century. To this day, modern warfare remains synonymous with tanks and mass infantry battles, although a confrontation of this nature has not occurred, (except briefly during Operation Desert Storm), since World War II.

The enduring image of World War I is of men stuck in muddy trenches, and of vast armies deadlocked in a fight neither could win. It was a war of barbed wire, poison gas, and horrific losses, as officers led their troops on mass charges across No Man's Land, and into a hail of bullets. While these impressions are all too true, they hide the fact that trench warfare was dynamic and constantly evolving throughout the war, as all armies struggled to find a way to break through the opposing lines.

Underground Warfare in World War I: The History and Legacy of the Fighting Beneath and Between the Trenches examines one of the most forgotten aspects of the fighting on the ground during the Great War.

What listeners say about Underground Warfare in World War I

An aspect of WW1 I never knew. I'd heard some about tunnels, but had no idea their extent or power.

Too bad it didn't end all wars

I fail to understand why some readers don't comprehend that Charles River Editors publications are post grad theses, or Publish or Perish, and are always well researched but never long and involved. Rant over.
This one is a horrifying study of the grisly work of those who dug the minefields in Western Europe honestly believing that it would be the War to End All Wars. The book begins with a sociopolitical review of the root causes of this war which roamed from Ypres to Gallipoli with special emphasis on the dangers of work in areas plagued with carbon monoxide as well as the devastating explosions underground. As a retired nurse I admit that I view these things differently than military historians. The bibliography does seem thorough as far as I can see.
I have the Whispersync and found Bill Hare to be well suited for the narration.