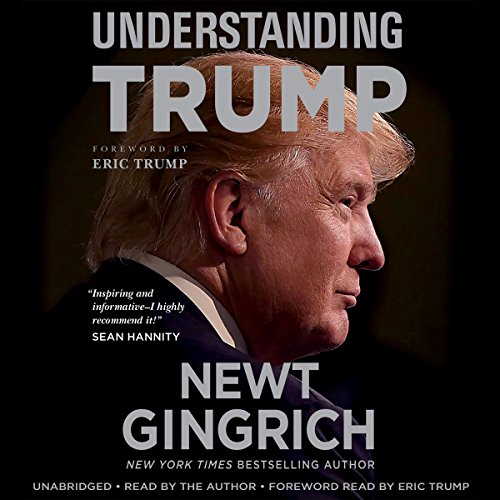 The presidency of Donald Trump marks a profound change in the trajectory of American government, politics, and culture. Like his administration, the movement that put him in office represents a phenomenon that is worth studying.

Donald Trump is unlike any president we've ever had. He is the only person ever elected to be commander in chief who has not first held public office or served as a general in the military. His principles grow out of five decades of business and celebrity success - not politics - so he behaves differently from traditional politicians.

In Understanding Trump, Newt Gingrich shares what he learned from more than two years helping Trump and his team throughout the campaign, the election, and during the first months of the presidency. Mr. Gingrich provides unique insight into how the new president's past experiences have shaped his life and style of governing. This book also includes Mr. Gingrich's thorough analysis of how President Trump thinks and makes decisions as well as the president's philosophy, doctrine, and political agenda going forward.

The audiobook edition features the following recordings of live speeches:

What listeners say about Understanding Trump

the book started out strong and gave a lot of insights into President Trump, how he thinks, operates, listens, makes decisions. but the majority of the rest of the book Newt starts giving his opinion of what needs to be done and his ideas on how it should be accomplished. definitely not what I was expecting. on the plus side he did provide a lot of history of our country.

I'm a fan of Newt and always impressed with his command of the subject. However, I'm disappointed in this book as it is more about history and Newt's guidance to President Trump than it is about President Trump. If you want an excellent lecture on history and government policy, this book is for you.

Newt's Brilliant But It's Not The Title

What made the experience of listening to Understanding Trump the most enjoyable?

Newt is brilliant and probably understands the world better than most anyone on the planet. However, the book would be better served to be called "Understanding What Trump Needs to Do."

I bought the book as I wanted to gain insight to what makes the man tick. Only about 30% of the book deals with this. The rest of the book talks about what is going on in the world, what Obama did wrong, what the Dems have done worng and how Trump should handle it. In fact, many times I would think that Newt wrote this hoping President Trump would read it so he would understand how to handle the world. Just my take. I'm not saying it's a bad book (I actually supported Newt while he was running). I love the way he thinks. I just think the title is misleading.

I highly recommend this to all, especially those that "don't get" Trump. Well done Speaker!

So, fascinating. Digs deeply into the behind the scenes of running this country...I learned so much!

Such a FABULOUS documentary

Absolutely phenomenal! As a scholar and historian, Gingrich lays out the details of why we are witnessing a monumenous time in America!

Light on Trump, Heavy on the Gingrich Manifrsto

Disappointed, as a fan of Trump I was looking for more behind the scenes stories about his childhood, career, and the actual working of the campaign. Instead we get a gloss over of all of that, and the last two thirds of the book on what Gingrich would do. He has some great ideas he but did Trump a disservice by sneaking them into a book that was supposed to be about Trump. Will be hard for me to view Gingrich the same again, now that I know what he's really about. Self serving. I'm glad Trump had sense enough not to bring him into the administration.

I did not like this book because it was not how to understand Trump, but a big campaign to buy in to his way of doing things. It was the opposite of what it was advertised to be. I listened to the whole thing hoping it would get better and it just got worse and worse in my opinion as the word understand was not defined as I understood the word to mean.
The worst part was when the disability or disabled were totally misunderstood in that people with disabilities were assumed they could work. They may not be able to work, in that their disability will not allow them to not that they are lazy and won't. That idea has been the bane of people with special needs, disabilities forever.
I plan on returning this book and getting my money back.
Fortunately Audible will refund and are a company that keeps their word.

I enjoyed hearing the perspective of someone who has intimately worked in DC and knows the good, the bad, and the ugly ways it works to sustain itself contrasted with the way President Trump tackles problems and SOLVES them. For Deplorables, I believe this gives encouragement that Trump has thick skin, doesn't quit, and will manage to make America great again. Loved that Mr. Gingrich read his own book--very conversational. Authors aren't always the best narrators but in this case, nobody else would have done such a credible job.

Misleading Title- should be Understanding What Newt Thinks Trump Should Do

The first two chapters are about Trump but that's about it. The rest of the book is about what he should do or what Newt wants him to do. Don't get me wrong, he's got some good points, but it's not about Trump, his agenda, or his cabinet.