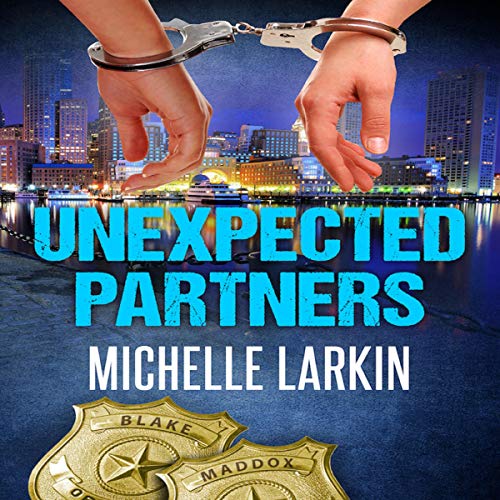 Written by: Michelle Larkin
Narrated by: A.J. Ferraro
Try for $0.00

After she’s abducted and barely escapes with her life, Dr. Chloe Maddox joins the Boston Police Department as a behavioral profiler. Her sole objective is to solve her own case. The only thing standing in her way is that she has no memory of what happened. When she locks eyes with the man who murdered her lover and left her for dead, the past comes flooding back.

Detective Dana Blake is still mourning the death of her wife. When she discovers Chloe’s abductor is the same serial killer who took her wife’s life, she insists on protecting her. Both women are caught off guard by their developing attraction as they build their case on the run from a clever sociopath.

Danger lurks behind every corner, and a killer is intent on recapturing his prey. Except, this time, he has his eye on Dana, too.

What listeners say about Unexpected Partners

Wanted to enjoy it more

The author took on a very heavy subject here. It's not that I don't think they did a good job with it, but rather that given the weight of the topic it seemed a little irresponsible in parts. There was just a general lack of understanding about the trauma that would happen with a story like this that made it completely unbelievable, and also pretty problematic. I ended up just feeling very uncomfortable and didn't really enjoy the ending. It could've been a lot better if it had been handled better.

This book was thrilling and heartfelt all at the same time... I couldn't stop listrning!! There were moments where I was holding my breath and felt like I was right beside the characters wishing and hoping for goodness. The author and narrator did a phenomenal job conveying the emotions and strength of the characters. Full of twists and turns, it's a book that I think will be enjoyed and highly recommended!

This book has romance, mystery. and suspense from page one. And not to mention a dog! The main MC'S are well thought out and I love there personalities. Won't blow the ending but I hope there is a second book.

Book was pretty good, characters decent. The narrator was not very good. Kinda monotone, with not a lot of distinction between the two MC.

Ok can I just say wrapping the story up the last few chapters was irritating, especially when the whole book I was sitting at the edge of my seat! It was still worth it and first time i get a book by Larkin. Enjoyed. And I love AJ Ferraro. So all is good!!

This was a capturing book. With an excellent crime story, excellent writing. Great narration. Good book

Dana and Chloe work for the Boston Police Department. Now they are trying to find the evidence to convict a psychopath. Chloe was raped, left for dead after 25 days and lost her fiancée. Dana’s wife was a victim of the same man and died. A heart wrenching story of survival and love. Recommend. Great performance and story.

twist and turns that held my attention the entire time. I could not wait to get back to this book!