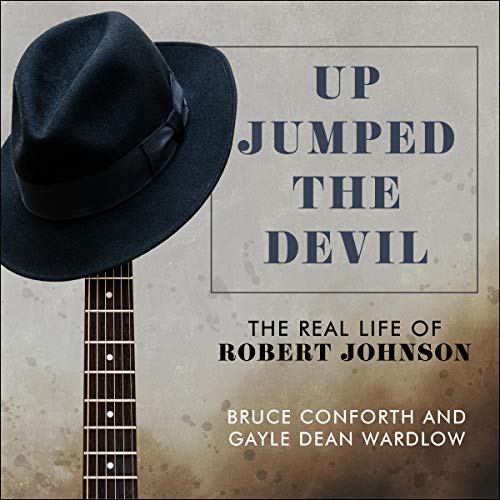 Up Jumped the Devil

Robert Johnson is the subject of the most famous myth about the blues: he allegedly sold his soul at the crossroads in exchange for his incredible talent, and this deal led to his death at age 27. But the actual story of his life remains unknown save for a few inaccurate anecdotes.

Up Jumped the Devil is the result of over 50 years of research. Gayle Dean Wardlow has been interviewing people who knew Robert Johnson since the early 1960s, and he was the person who discovered Johnson's death certificate in 1967. Bruce Conforth began his study of Johnson's life and music in 1970 and made it his mission to fill in what was still unknown about him. In this definitive biography, the two authors relied on every interview, resource, and document, most of it material no one has seen before. As a result, this book not only destroys every myth that ever surrounded Johnson, but also tells a human story of a real person. It is the first book about Johnson that documents his years in Memphis, details his trip to New York, uncovers where and when his wife Virginia died and the impact this had on him, fully portrays the other women Johnson was involved with, and tells exactly how and why he died and who gave him the poison that killed him. Up Jumped the Devil will astonish blues fans who thought they knew something about Johnson.

This answers so many questions about Johnson's life and adds understanding to his records. It would have been better with musical examples, so grab a copy of the box set to follow along in the chapters about the recordings in Texas. Like another listener, I felt that though the reader had a good vibe, his pace was plodding and I had to crank him up to 1.25X.

Must listen for blues fans

I have gone most of My adult life being a huge Robert Johnson fan. I was always under the impression that nothing was known about him. Most of what I knew about him Came from the movie Crossroads and a handful of light documentaries.

Enter this book. Many hours of details stitched together wonderfully. The information seemed credible and it provided great context for the music that I know so well and love so much. I particularly liked the break down of the lyrics that I never put much thought into.

My only hang up was the narration. Wow. Can you say boring? I sped it up to 1.25 and that made it tolerable.

Whoever loves music should read/listen to this.

I have gone through and loved many genres of music in my 40 years on this pale blue dot, but the blues... As Keith Richards of the Rolling Stones once said "The only good thing America has gave to the world is the Blues."
I think this book is a must-read for anyone who loves music and especially anyone who loves the blues.
I want to thank the author and the person who read it aloud and the people who put it together to be in audiobook format where I could enjoy this. Thank you.
Robert Johnson has forever changed the landscape of music it will always be one of my heroes.

Greatest story in american music history. A true breakthrough in the research about Robert Johnson. I really enjoyed the whole book!

Brings Johnson to life in a way that helps enrich his music. I hear his music in ways I didn't before, thank you for giving Robert his life back.