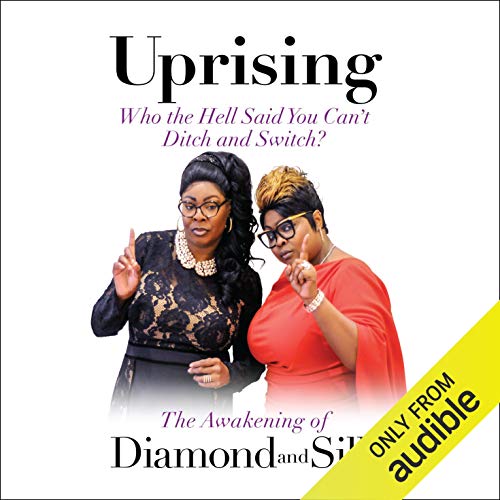 “There were these two women, these two beautiful, wonderful women, and I said, ‘Well, let me check it out.’ It took me about two seconds to say, ‘stardom.’” (Donald J. Trump)

“Diamond and Silk are a national treasure, and their astonishing, heartwarming story is nothing less than an American classic. Get ready to be bowled over.” (Mark Levin)

Who are Diamond and Silk? Donald Trump’s biggest fans. A national treasure. A force of nature. A political awakening that can’t be stopped. And a natural antidepressant. Diamond and Silk are all that and more.

The very sight and sound of these insightful and ebullient ladies lifts spirits and opens minds. Diamond and Silk are a unique phenomenon impossible to pigeonhole - or to control.

And now they tell their own story for the first time. In this account of their amazing journey, told in their own inimitable and irresistible voices, you’ll learn:

What listeners say about Uprising

It’s all fun and games until Diamond and Silk say that COVID-19 is a deep state conspiracy created to elect Joe Biden.

Great American Story! ** GET THIS BOOK**

This book is a must read. The last four chapters are compelling. These women are Changemakers! I listened to their wisdom and learned about their refusal to be intimated and manipulated. They have inspired me. Thank you Diamond and Silk 👑👑

once again entertained by Diamond and Silk! Top notch! no one can narrate this book better than them! thanks to both of you. ❣️

I enjoyed hearing about Diamond and Silk's lives in their early years and as young women. Their book is just like them! Real!! I loved hearing the back stories of truth and how they had to scrap their way for truths sake with GOP RINOS, fake media, Fox news, and lies of social media moguls and more. One day they'll make a movie of these two champians for America and how they supported their beloved President Trump. They should both run for office!

What a great book loved listening to these two wonderful amazing woman!
They are so happy & upbeat & encouraging!
God Bless Them!
Trump 2024!!!!!

I thought this book was fascinating. It will make you stop and think about whether you really believe what you vote for or just do it because everyone you know votes that way. It made me think about questions I have that no one seems to be willing to answer.
Are you brave enough to read something that might make you think 🤔?

Thank you, Diamond and Silk, for being bold and courageous enough to speak up for truth! What a powerful gift you have! I love you, both!!! ❤

They share their story from the beginning to the present. Great dose of reality

This book is so well told. As a white person, I was educated about black life. They are so bold and truthful. Love you two!

love these two and I loved what they had to say. great message for anyone questioning the mainstream.