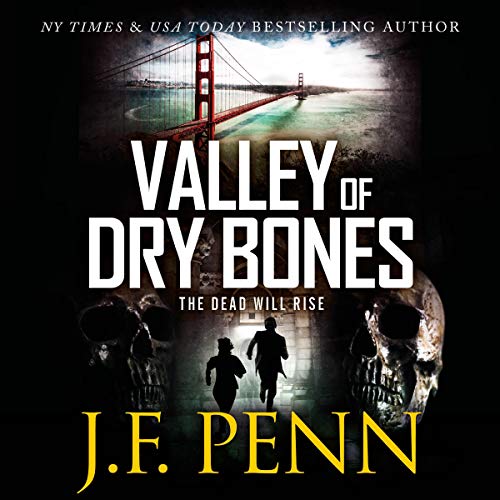 Written by: J.F. Penn
Narrated by: Veronica Giguere
Try for $0.00

An ancient prophecy. An occult secret. The power to raise the dead.

When a long-hidden tomb and a body covered in voodoo symbols are found in New Orleans, ARKANE agent Jake Timber discovers a mystery that stretches back to the Spanish Empire and the bloody dungeons of the Inquisition.

But he is not the only one who seeks the Hand of Ezekiel. A shadowy billionaire, backed by those who seek immortality at any price, will stop at nothing to find the relics that can turn bones to living flesh. When disaster strikes in the heart of the Louisiana bayou, Jake calls on ARKANE agent Morgan Sierra to help him once more as they race against time across the outposts of the Spanish Empire.

From Madrid and Toledo to the Philippines, Peru, and on to New Orleans and San Francisco, can Morgan and Jake find the relics and stop the resurrection of the dead?

A pause-resisting archaeological thriller with elements of the supernatural and occult, Valley of Dry Bones blends religious mystery with Indiana Jones-style action adventure. Valley of Dry Bones is book ten in the ARKANE action-adventure thriller series but can be enjoyed as a stand-alone novel.

What listeners say about Valley of Dry Bones

Facing what they've lived through, and more.

*I was given this free review copy of this audiobook at my request and have voluntarily left this review.

I'm thrilled to listen to Veronica again. I love her voice acting. She's got many great voices for different characters along with accents. And she's so clear in her speaking that I have no problems knowing what words she's saying. Veronica has brought the same love and caring for the characters in this world back to life for us. One thing I noticed in this audiobook is there isn't much of a pause at the end of the chapter. It feels like it's a shock to hear Chapter (number) when I hear it. I don't realize that a chapter has ended until I get the quick next chapter announcement. Lost in the book, I am.

I love that J.F. lets the story dictate the length. Some stories need more pages, other not so much. This is a shorter audio book, at 6 hours, so it's a shorter book. But she hits it all hard along the way, keeping up moving along to find out what they learn and what they will face. The story moves forward constantly. Each scene an important part of the mission in finding the relics. I like we don't get the down time of the characters, but what impacts the story line or the characters relationships.

Where we left off with Morgan in previous book, she had a big possibility of not returning to work for ARKANE. I even thought she might not return but Jake goes on with a new partner. We do get to see Morgan again in this book. The best part, we watch Morgan struggle with what she's seen and make a huge choice that will affect her life... Whether to work for ARKANE or go on with mundane life after all she'd seen and lived through. Jake does return for the current case and is partnered with Naomi, who we meet in a previous book. I like Naomi, but like Jake knows, she's new to the world of ARKANE cases.

What Morgan and Jake have lived through and seen, even sees in this book, has impacted them. It's hard to see and know about things the ARKANE deal with. There's a line that people could cross that questions morality, all for power. The relic found here could bring anyone to cross that line for love or power.

The ending felt as though Morgan and Jake have changed with all they've learned. They act on what they've seen and know. This feels like a turning point for them. This has me curious to read more stories with them and relics they will find.

A Thrilling Race Against Time

Honest review for free listen. Retrieving ancient religious relics has brought Jake and Morgan together in ten books. Each adventure more thrilling, more dangerous, and challenging beliefs and values. Penn creates her niche of supernatural suspense with satisfying results and an excellent narrator.

Veronica Giguere did an excellent job narrating this wonderful episode in the adventures of ARKANE and its operatives, Morgan and Jake. This story begins with Morgan in Spain, still recovering mentally and physically from her tremendous ordeal in the previous book, End of Days. When ARKANE is called upon to recover the Hand of Ezekiel a relic which has been separated into five pieces scattered all around the world, and may have the power to raise up the dead, the agents are off and running. Of course there is a really powerful bad guy who is thwarting their every move as the story twists and turns from location to location. Once again we get to travel to different parts of the world, with the real facts intertwined with the ARKANE adventure. I enjoyed Jake again teaming up with Naomi Locasto, the agent who worked with him in One Day in New York. When Jake needs the immediate help of his partner, Morgan, she is recovering in Spain. Once again a fun, exciting adventure with lots of action and suspense. I highly recommend this story and the well done performance of it by Ms. Giguere.

J.F. Penn has created this book for her ARKANE series. Searching for the Hand of Ezekiel, they must travel to several areas of the world. Veronica Giguere does a fantastic job of bringing this novel to life. She has a smooth reading voice that draws you into the story. An excellent way to spend your time.

I received a review copy from the author and this is my honest opinion. It's been so long since the last ARKANE novel, but it was worth the wait. Tables are a bit turned in this one Jake is healthy and Morgan is healing. So Jake goes off on his own to New Orleans to view a crime scene, but he contacts Morgan on her holiday for some help. From there things speed off into fast paced world hopping adventure. The ARKANE novels are always filled with well written and interesting characters and this one is no different. You just keep listening to find out what will happen next. I'm already looking forward to the next adventure.