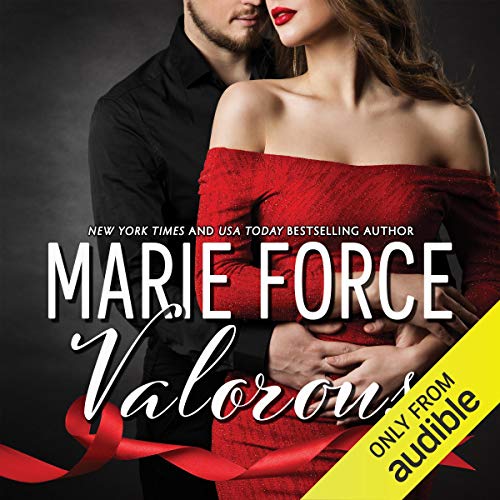 What listeners say about Valorous

Flynn and Natalie's whirlwind love story continues in this totally addictive second slice of their beautiful story but this starts off so tragically after Natalie's secret has been revealed and is splashed all over the world for everyone to share. So their relationship gets tested as Natalie comes to terms with her new situation and shares the disturbing and heartbreaking facts of her rape to Flynn and, of course, he is very loving and supportive throughout her ordeal and tries to fight her battles for her. However, Natalie doesn't stay down for long and together they are a very loving team..... but for how long?

Worth a credit? Dual POV's and really good narrators certainly helped to make this emotional listen a roller-coaster ride of breathtaking ups and devastating downs but the pure genius comes from Marie Force who's given her captive audience a Trilogy that I know I'll never forget. Sexy drool-worthy Hero, romance, sex, revelations, suspense and humor from one grouchy little dog all adds up, IMO, to a very very very creditworthy listen.

Wow One of the Best Reads Ever!

This book is the second in its series and is everything plus some! Flynn and Natalie are so easy to fall in love with! It is so evident that Flynn is madly in love with Natalie! She loves him just as much! They have become much more to each other in the past few weeks! They have gotten
Married and things are starting to fall into place! It's all a little to good to be true because after a encounter with Flynn's ex-wife Natalie learns of a secret that Flynn has been keeping from her! This secret may be the straw that breaks the camels back! There are also things from Natalie's past that have proven difficult for this loveable couple. One incident that has occurred gets the attention of the FBI. Everything is coming apart I'm hoping Flynn and Natalie survive and fight with determination to save their relationship

Flynn and Natalie's story is OFF THE CHARTS. Marie should be proud of the work she has put into this story. Waiting another week for the next release will be hell but the silver lining is at least it's only a week unlike so many other authors that make us wait months on end.
Flynn is a supportive and affectionate man that Natalie is very lucky to have her corner.

love love this book can't wait until I hear the next book. Hope it's as good as the first two books.

This book series is amazing! M.S. Force does a brilliant job of combining sex in a story but not losing the story. This series is HOT, Juicy and soo soo good! HIGHLY RECOMMEND IT!

Can't believe this book could top the first...but it surpassed the first. Next book inhand.

I loved book 2 and cannot wait until book 3 in this trilogy!!!! Love M.S. Force she is an amazing author!

Lies will always catch up with you!

Where does Valorous rank among all the audiobooks you’ve listened to so far?

I have really been enjoying this series and so I would say this books rates in the top five books I have read this year.

Natalie is my favourite character. At first she appeared to be a mouse but as the story progressed her strength became so evident.

Which character – as performed by Brooke Bloomingdale and Cooper North – was your favorite?

I enjoyed both narrators. Dual narration adds depth to the story and these two voices work well together.

I don't want to spoil this book for those who haven't read the book but the defining moment for me was at the end. I enjoy a book that allows a character holds true to their beliefs.

This is a series of three books that are being released one week apart. Normally I avoid books that have major cliff hangers but knowing the future release dates has made this a series worth following.

love this book series and audio just as much. listen to them on my drive to and from work.

So far, this trilogy has been a fun listen. The characters are layered and the story has it's twists and turns but, it does share a common theme with 90 percent of the romance novels that are written. The relationship is damaged by one member of the couple's refusal to always share the truth. The sad thing is that, just like in books, this is an all too common theme in real life. I guess I don't get why people seem to continue to repeat this same mistake over and over and expect a different result. Both the first and second books end with cliffhangers, which I hate, but at least the first three books are available immediately, so you don't have to wait any longer then it takes to download the next book. Enjoy!
-V from Kansas