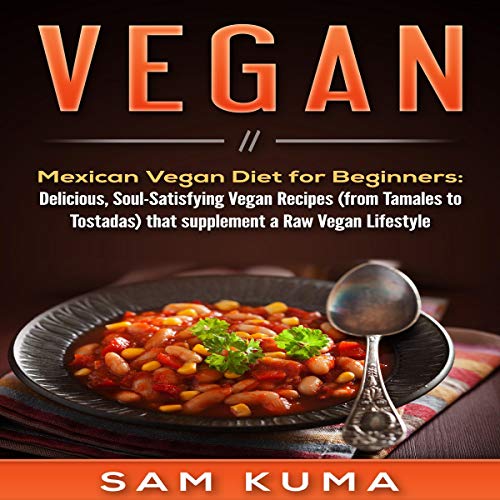 Are you a vegan that loves America's most commonplace ethnic food? Enjoy the exotic flavors of Mexican food while still being vegan.

Read below to learn more:

Being a vegan in the modern world is seen to be a monotonous and lifeless existence. A common misconception is that the vegan diet is synonymous with bland food without much room for desserts, let alone exotic flavors! Well, these all are nothing but misguided opinions and are absolutely not true!

With the advent of several dairy-free options such as soy milk, almond milk, soy yogurt etc., being a vegan has become easier. It is actually very much possible to lead a healthy, complete vegan lifestyle with very little inconvenience. You can enjoy all your favorite desserts, ethnic cuisines etc. without compromising on your way of life.

This book is on vegan Mexican recipes. Mexican food is among the most popular ethnic foods in the US and is also gaining popularity across the globe. The variety of spices, herbs, condiments, and desserts have long been loved in America.

Mexican cuisine is extremely luscious and eccentric. It’s a fusion of recipes from many different nations, especially those that have a predominantly Spanish-speaking population. The Mexican cuisine is famous for its unique and tasteful style. The recipes mentioned in this audiobook have been made keeping in mind this essence of Mexican cuisine. You’ll definitely find the fiery deliciousness that generally accompanies Mexican cuisine in all the recipes. Hence, we have tried our best to make sure that the vegan Mexican cuisine still has the general lusciousness that we associate with the non-vegan version. There are a large variety of recipes that have been mentioned in this audiobook that are enough to cater to all of your needs. You don’t have to follow that same old vegan diet anymore; you can cook up a new cuisine every day. You can experiment and enjoy making food that you will surely love.

the best raw food diet i have tried

I have tried several types of diets me and my husband both have and never was able to keep weight off
https://www.audible.com/pd/Vegan-Mexican-Vegan-Diet-for-Beginners-Audiobook/B07MR626T9
So we heard about this one and decided to get this book and give it a try well i can say the recipes are easy to under stand and the food is delicious , and we have been keeping to this , and very satisfied with it . and like the easy recipes in it .
I have one favorite though which is the Tamales this is the first time of me trying them and also making them according to this book and i am hooked on them now .
#vegan

Good recipes that will warm your belly!

I went through this book and was able to pick out a few good recipes that looked amazing! It was a great book and i can't wait to try out these wonderful new meals!

I really enjoyed being able to listen to the recipies while cooking. So much easier than constantly having to ' wake ' up my device to look at the next step. Great, easy to follow directions.

I will admit I am only a part time vegan, I chose a vegan lifestyle during my work days in order to avoid many unhealthy food situations that I find myself in and this cookbook has been such a lifesaver. I’m able to pack healthy, flavorful, delicious meals for my trips. I even find myself opting for vegan choices on my days off because they are just so yummy!

Is great to have some Mexican recipes that can work with a diet. Mexican food is so good but is usually packed with bad things like fats and sodium. This book gives you recipes that you can make that are more healthy for you while dieting so you don't lose out on the great tastes Mexican cuisine provides. I also found that reading the recipes gives you an understanding of how the author made the recipes healthier and has given me inspiration in ways to cook in a different way. I have tried two recipes already and was very happy with them. Have printed a couple more recipes to try in near future.

A cookbook on audio?

This is my first cookbook on audio. And tbh it will probably be my last. I love to follow recipes but I am constantly going back to re-read and double check, which is really had to do on an audiobook when my hands are all messy. The chapters in the book also don’t match up with the chapters in audible.

The food and recipes were great though!!

Two of my favorite things

I have always loved Mexican food but have never needed to cook it myself. My mother in law makes the bests Mexican dishes. Now that I'm a vegan I need to learn some different dishes that I can teach her to incorporate into her rotation. After listening to this audiobook I learned some great alternatives!

I like the story, and the voice are clear. This is

I like the story, and the voice are clear. This is worth a listen!

We are starting a vegan lifestyle and this audible book is definitely great for beginners. Good recipes, clear voice and easy to follow through